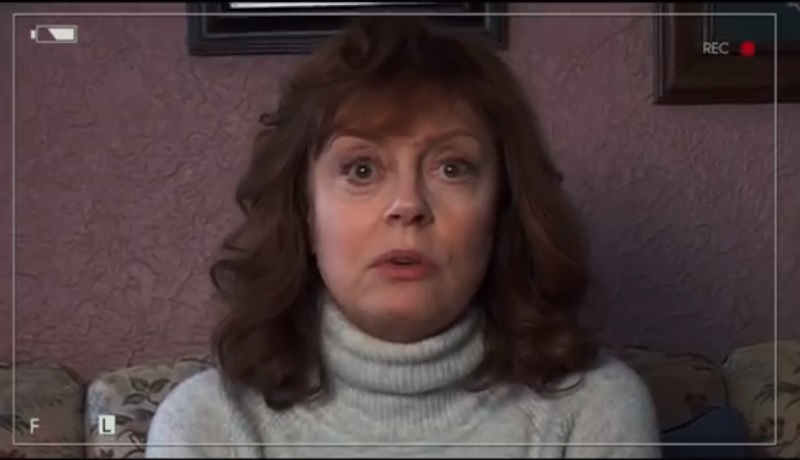 Susan Sarandon scores again in the Fierce Mother genre as Helen Sterling. Her journalist son Andy (Julian Morris) a captive of greedy terrorists in war-torn Syria who are demanding $20 million for his release. Helen is an Emergency Room nurse at a New York hospital, and thus far from being able to raise such a large sum, even were she to sell her home. Besides, as both agents of the FBI and the State Department warn her, she would be breaking the law were she to pay any ransom.

Helen’s work in the Emergency Ward keeps her busy during working hours. She mentors the new Iranian émigré Dr. Reza (Amir Malaklou) who is the intern. The experienced doctor does not know how to tell loved ones about death, so she coaches him through a difficult situation. A young patient has not come out of a long coma, so she delicately broaches with Amy (Lola Kirke, the mother the possibility of organ donation. Following the advice of the federal agents, Helen has not shared with any of her colleagues the plight of her son. Her boss Keesha (Adepero Oduye) detects a problem and is pressuring her to share what it is.

Helen is at her wits end over the ineffectiveness of the government in making contact with the hostage holders. They will not tell her anything about what is going on, FBI Agent Walsh (Patrick Breen), treating this as a crime and the State Department as a diplomatic issue. Andy’s girlfriend of Iraqi heritage Sheila (Sheila Vand) is an activist on behalf of imperiled journalists. She tells her it is foolish to keep Andy’s plight secret, that she should be doing just the opposite of what the government lackeys are advising her. When she puts her in touch with a covert group called the Viper Club, two members come to help, Sam (Matt Bomer) and Charlotte (Edie Falco). The latter herself had a son whom the group had successfully negotiated the ransom and release.

Helen at first protests that she can raise nowhere near the $20 million the terrorists are demanding. Charlotte assures her that their Club’s network includes many wealthy people who donate to specific causes. Demanding proof that Andy is still alive, the activists are able to arrange for Helen to talk briefly with Andy via Skype. Her flagging hope is renewed.

Director and co-writer (with Jonathan Mastro) Maryam Keshavarz provide a timely thriller that is never sensationalized. I expected to see Helen, Charlotte and Sam to fly to the Middle East and eventually either negotiate or shoot it out with the bad guys, but the film does not venture into adventure territory. Indeed, its resolution is that there is no easy resolution to the horrible situations to which the Helens of this world are subjected. Although the U.S. government agents are depicted as “doing nothing,” their arguments against ransom paying are laid out in a logical form. It is cold logic: Pay what terrorists demand, and you not only fund their violent activities, but you also provide the encouragement for them to capture the next Andy and demand more millions for their coffers from another family.

Helen really is in a dilemma, and yet what parent would not follow her course to save a beloved son or daughter? The words of Qoheleth certainly apply to Helen, a fearful mother with no power. However, she does have comforters, the two Viper Club members. She will need them. This film has already left the Cincinnati art house after just a couple of weeks, so if it opens in your area, do not put off seeing it, especially if you are a fan of Susan Sarandon’s marvelous work.

A mother whose son is a hostage in the ME, looks beyond the government for help in getting him released by paying ransom.
Editor Rating ★★★★★4 out of 5
More Details