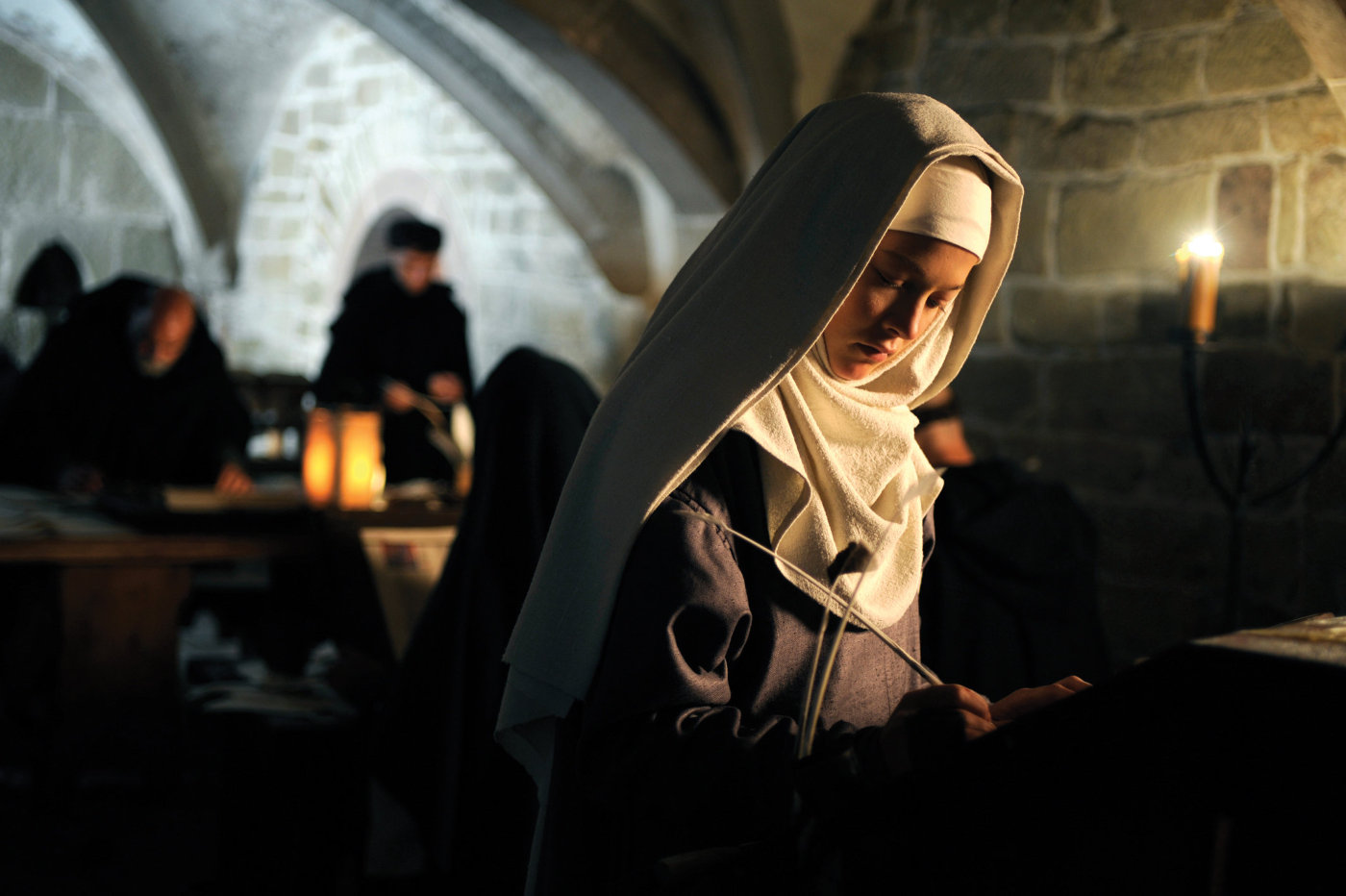 Keep alert, stand firm in your faith, be courageous, be
strong. Let all that you do be done in love.
Romans 16:13-14

Paul’s words of encouragement could well have been directed to (or perhaps described) the 12th century woman who came to be known as Hildegard of Bingen (1098–1179). Director Margarethe von Trotta gifts us with a superb glimpse of the life of this incredible woman, whom some regard as the greatest female of the Middle Ages. Mystic/seer, reformer, thinker, writer, poet, herbalist, healer, and musician—all these apply to her, as the dramatic vignettes that make up the film reveal. The excellent cast is headed by Barbara Sukowa, playing the gifted leader as a flawed human being, as well as a ‘saint.” (We must qualify “saint” because she has not been officially declared such, there being four unsuccessful attempts at canonization.)

The film begins as a new Millennium dawns with people crowding into churches because the clergy and they are convinced that the end of the world is at hand. However, the sun rises as usual the next day. Then, about six years later eight year-old Hildegard is brought by her parents to Magistra Jutta von Sponheim (Mareile Blendl), the warm, maternal leader of the cloistered nuns attached to the Benedictine monastery of Disibodenberg. As the years pass a slighter older girl Jutta (Lena Stolze), namesake of the Abbess, is envious because the Abbess favors the lively Hildegard over her. Following a spat between the two, the Abbess lectures them both on the evil results of envy, closing with the admonition to love. This will be a lesson that both will recall many years later.

When Magistra Jutta dies, Abbot Kuno (Alexander Held) tells Hildegard that she is to be the next magistra, but Hildegard argues that she is not worthy, and that she would accept only if her fellow nuns elected her. He says that as abbot he has the authority to appoint her, but she disagrees, and in the end it is the nuns who vote her in. As she and the younger Jutta prepare their “Mother’s” body for burial, they are shocked to see that the abbess had been wearing a metal girdle with barbs that tore into her flesh. Later on she treats the wounds of another flagellate, a man whose back had become infected from self-flagellation, and she reproves him with, “God wants mercy, not sacrifice.” There are scenes in which we see Hildegard teaching her nuns how to identify and grow herbs for medicines. And there are less pleasant scenes of her coming up against the authority of her abbot. She has confessed to Brother Volmar (Heino Ferch) that since the age of four she has been receiving visions, and when first told, Abbot Kuno is against her writing about them—until he begins to think about what rewards this could bring to their monastery from pilgrims coming there because of Abbess Hildegard. An investigatory committee sent down to interrogate her is opposed to her, one of them accusing her of heresy. However, they are over-ruled when Hildegard manages to gain the support of the famous Bernard of Clairvaux, the Archbishop of Mainz, and eventually of the Pope himself. When one of her nuns is impregnated by one of the monks, Hildegard even manages to overcome the abbot’s objection to the nuns moving and building their own cloister.

Richardis von Stade (Hannah Herzsprung), daughter of a powerful family, is accepted by Hildegard into the sisterhood even though she seems so impetuous that she violates some of the order’s strict rules. (She would have made a good model for Maria in The Sound of Music.) Able to read and write, she joins Br. Volmar as scribe and confidante of the abbess. Late in the film we see a darker side of Hildegard when the family of Richardis arranges to have her become head of another cloister, something that Hildegard fights against, but eventually has to assent to. She claims to love Richardis, but apparently is unable to see her protégé advance in her own ministry because it means their separation.

A more delightful sequence is when Hildegard and her nuns are preparing a morality play for which she has written the music. As she assigns parts, the nuns ask who will play the part of the Devil, to which she says, “Brother Volmar.” They all laugh at this, the good monk, so supportive of the abbess, being so far removed from any evil thought or deed. The play is for the entertainment of the abbess of another cloister soon to visit them. On the appointed day the sisters don white silk gowns, let their hair down, plaiting it with flowers, and dance around the Devil as they sing and bind him with a rope. However, their guest is offended at the unorthodox dress and gaiety of the nuns, and refers to the Apostle Paul in regard to proper female dress and requirement that their hair must be covered. Without flinching, Hildegard replies that God loves beauty, and that Paul’s advice was for married women, not virgins. The visitor refuses the offer to stay and share supper with the nuns.

Few films depict medieval life as well, and particularly that of the cloister, as does this film, and an added treat is that much of the soundtrack incorporates Hildegard’s music. Margarethe von Trotta, who also wrote the script, has achieved the difficult task of showing both the light and the slightly darker side of a good person, possibly even a saint, without the cloying sentimentality of a Catholic holy card. Some have said that Hildegard was a thousand years ahead of her time. Actually, her church, and even our liberal Protestant churches have not fully caught up with her.

1. From what you have seen in the film and have known about the Middle Ages, what was the role of women in the 12th century? How does Hildegard go against this, and how does this make her achievements all the more remarkable?

2. What was (and still is in some Hispanic cultures) the basis for self-flagellation? How is this a focusing upon the understanding of the cross as law and punishment, rather than grace and redemption? What lies behind Hildegard’s statement to the injured man, “God wants mercy, not sacrifice” ?

3. What do you think of Magistra Jutta’s lesson on envy and love? How do we see Hildegard embracing this? How is it fitting that Hildegard and the younger Jutta repeat this later? How can this be a life-enhancing lesson for all of us (for example, how many families have been troubled by one sibling feeling that a parent favored another more)?

4. What do you think of the way in which the filmmaker showed the visions? Film, being a pictorial medium, is a difficult one for dealing with the spiritual, the latter being non-corporeal: except for one shot in which the image of the sun is computer enhanced, the vision shots show just Hildegard and especially her face. How is this in keeping with her insistence that her visions were not spectacular dreams or trance-induced, that they came to her in ordinary circumstances when she was wide-awake?

6. The morality play Ordo Virtutum (Play of the Virtues) gives rise to the debate between Hildegard and the visiting prioress: what do you think of Hildegard’s defending the costumes and physical appearances of the silk-gowned nuns, “God loves beauty.” Or her reminder that the apostle Paul’s strict admonitions were to “married women” ?

7. How does the sequence in which Hildegard fights so hard to retain Richardis reveal her shadow side? How has she failed to understand what the apostle Paul meant in his “hymn to love,” especially 13:5-7? How does this provide us with a more honest or fuller picture of the “saint.” ? And, in keeping with the writings of Graham Greene, a better understanding of sainthood than the popular one? (See his The End of the Affair.)

8. For more about this intriguing figure see the beautifully illustrated book ILLUMINATIONS of Hildegard of Binge (Santa Fe, NM: Bear & Company, 1985) in which Matthew Fox comments upon the generous portions of the text from her first book, Scivias (Know the Way), the one she celebrates in the film. ILLUMINATIONS includes 24 of the paintings which were created under Hildegard’s close supervision.

9. Also you might want to see feminist Judy Chicago’s controversial art installation “The Dinner Party,” which first brought Hildegard of Bingen to the attention of the public. The piece celebrates the lives and accomplishments of a host of historical women in order to, in the words of the artist, “end the ongoing cycle of omission in which women were written out of the historical record.” Go to: http://en.wikipedia.org/wiki/The_Dinner_Party. This article also lists the women, and so by clicking onto her name, you will arrive at another excellent article detailing the life of Hildegard.