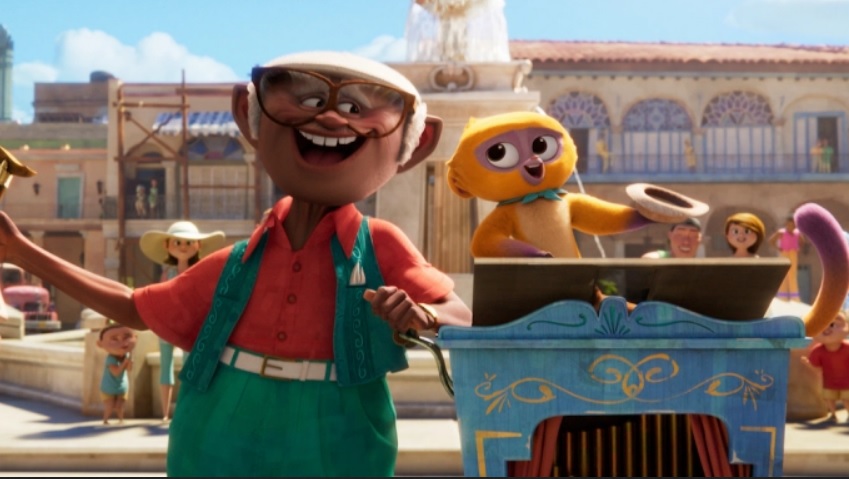 Move over Pixar and make room for this toe-tapping musical from Sony Pictures Animation studio. The fact that Hamilton’s Lin-Manuel Miranda wrote the songs and voices the main character ought to attract a large audience. Vivo is a story of love—that of unspoken love and that of friendship, both of which transcend death. The title comes from one of its two main characters, a Cuban kinkajou, a small monkey-like creature with big eye and a long-tail. Aka as a “honey bear,” it is a tree dwelling relative of the raccoon family. Parents with small children can count on requests for stuffed ones once the marketing people get to work.

Vivo was raised by guitar playing Andrés (voiced by Cuban musician Juan de Marcos) who daily opens up his cart in Havana’s picturesque Plaza Vieja and out pops Vivo (Lin-Manuel Miranda ) who joins him in a lively song and dance routine that draws a crowd of tourists. The little creature not only sings but plays the flute, drums and maracas as well. Their music is pleasing, so when Vivo passes among the onlookers his hat fills up with coins and paper bills.

One day Andrés receives a letter from Marta Sandoval (Gloria Estefan), the singer with whom he had partnered years before — and for whose memory he holds dear in his heart. Many years ago Marta was invited to perform at the Mambo Cabana in Miami. Though secretly in love with her, Andrés had kept his feelings to himself, not wanting to deflect Marta from following her dream. She writes that she has decided to retire and would like him to come to her farewell concert for a reunion. The old man is delighted that she has not forgotten him. He had written and laid aside a love letter to her in the form of a tuneful song. However, before he can deliver it to her, in a poignant, understated scene, Andrés’ heart gives out during the night while he is sleeping in his chair.

Vivo is grief stricken in the morning to find that his beloved mentor has passed away. He decides to deliver the folded manuscript to Marta, but how is he to travel from Havana to Miami? The answer comes in the person of Gabi (Ynairaly Simo), the daughter of Rosa (Zoe Saldaña), Andres’ Cuban-American niece who has come to Havana to give the eulogy at the memorial service held in the plaza.

The tween with her purple hair and over-sized glasses is very much her own person, her signature song “My Own Drum,” to which she bounces around the room, reminding one of Thoreau’s famous quote. How she meets and teams up with Vivo makes for a wild journey that includes crazy travels to the Keys, a chase by three Sand Dollar Scouts through the Everglades where a menacing python and two friendly birds, and eventually to Miami itself where Rosa, angry that Gabi has run away, tries to prevent the pair from reaching Marta, who is anxious before her concert that Andres has not yet shown up. This is a cartoon, so we know that all’s well that ends well, even though the song manuscript has been lost during the madcap antics in the swamp

Director Kirk DeMicco and co-director: Brandon Jeffords have delivered a charming family film that will probably join such favorites as Frozen in the years to come. The computer generated animation is excellent, with old Havana beautifully rendered. In flashbacks 2-D animation is employed. The camera soars around the characters, immersing us at times in the action. I loved that Gabi was not depicted as a pencil-slim princess, but rather a plain-looking girl with eccentric tastes in regard to her looks and dress—and very much strong willed enough not to let the world squeeze her into its mold. And the music, from the Latin beat songs in Cuba to the ear-challenging raps to love ballads, will resonate for a long time, luring music lovers back to the film or to the soundtrack many times. And all can enjoy the humor, one of my two favorites being voiced by Gabi as Vivo enters her backpack just before their plane flight from Havana, “If anyone asks, you’re my emotional support animal.” In Miami Vivo, passing by yard after yard of pink flamingo lawn ornaments, says, “Plastic birds? Florida is weird!”

When little Vivo's owner & singing partner Andres dies in Havana, he teams up with Gabi, a grandniece, to deliver a love song to the man's long-separated lover in Miami.
Editor Rating ★★★★★4.5 out of 5
More Details