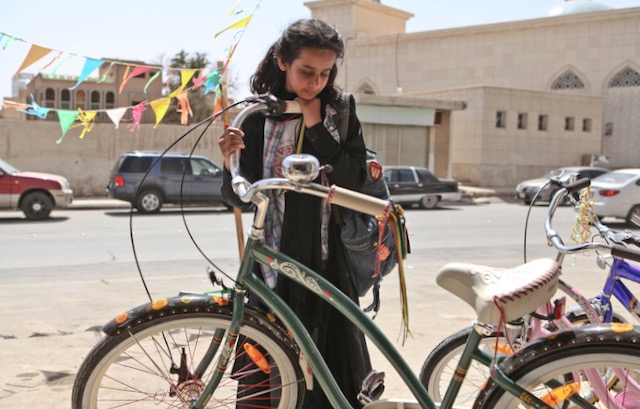 …there is need of only one thing. Mary has chosen the better part, which will not be taken away from her.”

What an unexpected delight! A Saudi feminist film! Yes, you are reading correctly. Also, this is not only the first feature film to have been shot in Saudi Arabia, it is also the first film directed by a Saudi woman. Indeed, this is Haifaa Al-Mansour’s first feature film, plus she also wrote the screenplay (though she has directed several short films). It is also very timely, with the recent news reports of rebellious Saudi women breaking the ban on women drivers by driving around in their own cars. This film is about a junior version of this quiet revolution, 11-year-old Wadjda living with her mother in Riyadh, Saudi Arabia, who wants to buy a bicycle Although not specifically banned, this is something that girls just do not do in that Wahabi (one of the strictest forms of Islam) dominated society.

When the neighbor boy Abdullah (Abdullrahman Al Gohani) teases Wadjda (Waad Mohammad) by snatching her headscarf and riding off with it on his bike, the irate girl runs after him. He slows down so that she can catch him, and thus begins the formation in her mind of the desire for her own bike. She would like to race him, she says. This desire increases when she spots a bike atop a van that is passing by. She follows it to the local toy store, where the owner places a price tag on it and sets it out front. Wadjda examines the green bike, whereupon the owner tells her that it is too expensive for her—800 riyals (somewhat over $200). Counting her savings back home, the most she can come up with is about 80.

She asks her mother (Reem Abdullah) if she can loan her the difference. However, Mother (she is given no name) is preoccupied with her own problem—that her husband, still living with his parents because she has not been able to conceive a son, might give in to their pressure to take a second wife, which would reduce considerably her status. As it is, she has to work at job three hours away to supplement her husband’s small allowance for them—and this means paying a surly driver for the round trip.  She not only refuses, but also warns Wadjda that it is not proper for girls to ride bikes because that would upset their virginity, thus jeopardizing their marriage prospects.

We know already by the school scene before the beginning credits that Wadjda will not accept this. In that scene the girl is called out from a group of classmates practicing a simple dance and religious recitation and sent outside to stand in the hot sun because she waved at friends passing by. She also is told by the authoritarian headmistress Hussa (Ahd) to get rid of her high-top canvass sneakers that peek out from her black robe and wear black shoes like the other girls do. Wadjda is also entrepreneurial in that she makes mixed tapes of songs and weaves strands of yarn to make bracelets, which she sells to her classmates. When an older student asks her to pass on a note to a man behind the school, Wadjda demands double the price offered by the girl, and when she delivers the note, tells the man that he is to pay her as well.

There are endearing scenes interspersed throughout the film of visits by her father (Sultan Al Assaf), who clearly loves his daughter and her mother, and yet–. Even more scenes with her friend Abdullah, who admires her spunk. He tells her that when they are old enough he would like to marry her. Given the way he reacts to and supports her apple cart-upsetting ways, we can hope that this works out—though that, as they say, is another story. We also see the loving yet adversarial relationship between the girl and her mother, the latter being the usual Muslim woman accepting her low status in society. However, although she completely covers up her head and face when venturing out, she wears slim fitting blue jeans under her robe, and at home just a short tunic so that her jean-clad legs are exposed. Whereas the daughter longs for the bicycle, we see in the shopping mall scene that Mother longs for a fancy red Western-style dress in the hope of impressing Father.

Wadjda is bold enough to tell (not ask) the shopkeeper to hold the bike for her. During the course of her many visits to the shop he obviously develops an affection for her, and so complies. The girl, learning that the prize for the school’s annual Qu’ran recital contest has been upped to 1000 riyals, takes Ms. Hussa aback when she asks to join the religious club so that she can enter the contest. Wadjda sets forth ardently to memorize the verses, which also must be recited (more like chanted) with just the right inflection and tone. During practice Ms. Hussa is so impressed with what had once been her most troublesome pupil that she tells the rest of the girls to look to Wadjda as a good example of piety.

Haifaa Al-Mansour’s film might remind you of the similarly themed 2006 Iranian film Offside, about a group of football-loving girls in Tehran who run up against the prohibition banning females from attending the World Cup games.  I love these kinds of films that immerse us in an unfamiliar culture, revealing to us ways of life so different from our own. I was glad to see that even in conservative Saudi Arabia, girls are encouraged to go to school, unlike the areas In Pakistan and Afghanistan where the Taliban hold sway. The relative freedom for women in the home itself is shown by Ms. Al-Mansour, with both mother and daughter casting off their outdoor garments when they come home in favor of slim jeans. However, when Father brings some friends, all males of course, for a supper party, Mother brings the platters of food she has prepared and does not even enter the room but waits outside the closed door for her husband to pick it up. Wadjda studies Father’s family tree hung on a wall and notes that his branch does not have a leaf because as a girl she does not count. She writes her name on a piece of paper and tacks it onto his branch. And outside, we see that girls are ordered to keep their voices low so that men cannot hear them. When some men work on a rooftop a block away, the tradition-bound girls (though not entirely, because they do read Western magazines, paint their toenails, and use markers to decorate their ankles—which later gets them in trouble) move around the corner out of sight, Wadjda continues her game of hopscotch in view of the men. These and many more little touches make us aware of what daily life is like for Saudi women.

Wadjda ends in a powerful way, the conclusion containing an unexpected note of grace and triumph/defeat that will leave a lump in your throat. We come away with the notion that the Man whom Muslims consider one of their prophets probably would say to Wadjda, as he did to Mary, the knowledge-hungry sister of the tradition-bound Martha, “There is need of only one thing. Mary has chosen the better part, which will not be taken away from her.”

There is an irony to the film in that there are no public cinemas in Saudi Arabia. I also just learned another “first” for the film: it will be the first film submitted from Saudi Arabia for a “Best Foreign Film” at the 86th Academy Awards. Pretty good for a first-time film director, male or female! Note too that the girl’s name has been said to be “12,” “11,” and “10” in various reviews. Unfortunately, the film’s official website does not reveal her age.

The full review with a set of 10 questions for reflection or discussion is in the December 2013 issue of Visual Parables.

A Saudi Arabian girl goes against her family and her culture by insisting on getting a bicycle, just like the boys.
Editor Rating ★★★★★5 out of 5
More Details