And suddenly there was with the angel a multitude of the heavenly host praising God, and saying,
Glory to God in the highest, and on earth peace, good will toward men.
Luke 2:13-14 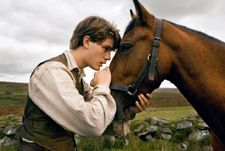 Stephen Spielberg’s first of two films to be released this December (Tintin will be out within a week) will win the hearts of those who loved Black Beauty or The Black Stallion. The director and his screenwriters Lee Hall and Richard Curtis based their film on the novel by Michael Morpugo and the 2007 London stage play by Nick Stafford. Divided into two parts, a pre-War pastoral sequence in rural England, and an action filled one in the war-torn fields of France, the film will appeal to all ages.

When English farmer Ted Narracott (Peter Mullen), living at the edge of poverty, foolishly buys at an auction a thoroughbred horse for plowing his field, his wife Rosie (Emily Watson) is outraged. He was supposed to buy a plow horse, but being a bit tipsy from drink, he had determined to outbid his landlord Lyons (David Thewlis) whom he despises. His teenage son Albert (Jeremy Irvine), immediately drawn to the beautiful horse, works hard to train the high-spirited animal to pull a plow. All the neighbors gather to witness what they think will be a failure as the boy hitches Joey (thus he has named the horse) to the heavy plow and tries to get him to pull it. The land is rolling and rocky, and Joey is confused by the difficult task. Cutting back and forth between the crowd, the horse, and the boy, Spielberg infuses drama into this sequence so that by the time Albert, talking to and stroking the horse, manages to convey to the struggling Joey his intent, there is a note of triumph as the horse cooperates and the long furrows are plowed deep and straight, to the amazement of the onlookers.

However, Nature does not cooperate as well as Joey, with the lush crop being ruined by a rainstorm. Badly in need of money to pay the over-due rent, Ted reluctantly has to sell Joey to an Army officer buying up horses for the cavalry. War has just broken out on the Continent. The bond developed between boy and horse remains strong, Albert telling Joey at their tearful parting that he will find him no matter what.

There follows a series of adventures, some of them horrendous as Joey passes through the hands of various humans amidst the carnage of the war. The British officer also comes to love the horse, but in a terrible scene that shows that war has entered into a new mechanized phase, a cavalry charge against the Germans that at first seemed a victory turns into a slaughter as German machine guns cut down the charging equestrians.
For a brief time Joey is loved by a young German soldier, then an old French farmer and his teenage granddaughter, and then he is confiscated to pull a heavy cannon over a muddy road. Joey and a beautiful black horse work in tandem for a while, but the cruelty of conditions and their treatment by a harsh artilleryman takes it toll. Fortunately for Joey another young German soldier strives to protect the animal.
As in his past films, the director brings out the humanity to be found on both sides of the battle lines.

One of the best films of the year, the film is gorgeously photographed. The rolling hills of England and the picture-perfect rustic cottage of the Narracott’s are beautifully captured by the Technicolor film. At first the scenes in France are beautiful as we see the British cavalry moving through a field of tall golden grain, but after the massacre by machine guns, the palette turns stark grays and blacks as the story moves into the stalemated trench warfare sequence. That machines are replacing the horse in warfare is well shown by the faceless German tanks that crawl through the mud and smash down anything impeding their paths. However, there is still a trace of humanity on the battlefield, as we see in the scene in which Albert, now old enough to join the Army, and the German youth who has befriended Joey, meet in No Man’s land to rescue the injured animal from the barbed wire that encircles his body. This reminds me of the Christmas Eve Truce so movingly depicted in the French film Joyeux Noel.

The film is also indebted to many other earlier movies—the already mentioned horse films and, of course, some of the Lassie films in which boy and dog are separated and then reunited at the end of the film after the dog encounters numerous humans, most but not all being kind-hearted. A harsher film that Hollywood Reporter reviewer Todd McCarthy mentioned in his review is Robert Bresson’s 1966 masterpiece Au Hasard, Balthazar about the lowly mule with the exotic name that passes through the hands of a number of masters, most of them not so kind as those in the American films. Indeed, some have regarded the cruel suffering borne so patiently by Balthazar as pointing to its being a Christ figure—thus if you haven’t yet seen this film, you owe it to yourself to search it out on Netflix. (I would say the same of the wonderful Joyeaux Noel as well.)

War Horse is one of those films that has made the last month of the year such a joy. Some may quibble over the unlikely happy ending, but then this is a film by the man who turned James Ballard’s dark novel about a boy in a Japanese internment camp Empire of the Sun into a bright, positive film, so what do you expect? The war scenes are stark, though photographed in a way that does not rub our noses in the blood and gore, so parents should see the film first before taking a young child to it. Most of the latter probably have seen as much violence on their television screens, but here they will also see the humanity and love that also are to be found in the midst of war. Youth groups will also find lots of material for discussion. Again Spielberg has gifted us with a film to love and cherish for years to come.

A version of this review with discussion questions will soon be available to subscribers of visualparables.net.