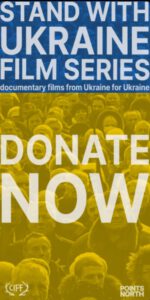 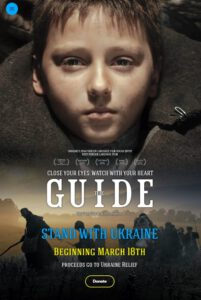 I just heard the interesting news on Good Morning America about a way for film lovers to enjoy a good film and help the Ukrainian relief effort at the same time. A consortium of filmmakers, theater owners, distributors, and media folk have joined together in a fund-raising project called “Stand With Ukraine Through Film.” The film was submitted to the the 87th Academy Awards as a  “Best Foreign Language Film” contender–The Guide, directed by Oles Sanin.

The film is set in Soviet occupied Ukraine of the 1930s when Joseph Stalin was starving to death millions of peasants who resisted his farm collectivism program.  I have not yet been able to see the film, which has won awards at several film festivals, but here is the synopsis as presented on IMDB’s “Story Line:”

Peter is a 10-year-old boy living in the midst of turbulent early-1930s Soviet Ukraine. His father, an American engineer, is killed for obtaining secret documents about the repressions, which now are hidden in Peter’s book. The boy flees from the police with a blind kobzar (Ukrainian folk minstrel), Ivan Kocherga. Ivan does everything to help his young guide grow up and survive with a kind and clear soul that will not be hardened by what his eyes have seen. He tells his young guide elaborate stories that make him believe there can be a different reality from what he sees around him. The viewer is challenged to admit that the blind kobzar might see the world with greater clarity than those with perfect eyes.

Just from the above I can see that we will learn more about why Ukrainians are so stalwart in standing against Russian attempts to destroy their nation.  Referred to as “The Great Famine’ and  “Terror Famine,” Stalin’s campaign of 1932-33 in which he seized all crops and withheld them from the people of Ukraine resulted in the deaths of almost 4 million people. The Ukrainians have their own name for it, “The Holodomor.” And Putin, in his claim that Russians and Ukrainians are one people believes that Ukrainians can forget that?

According to what I have been able to find out, the proceeds go to a charity actively distributing humanitarian aid in the war-torn country. I plan to ask theater managers in my area if they plan to join in this effort, and I encourage you to do so too. Maybe this will lead them to join in the campaign.

For more details of the project as it has unfolded in suburban Boston,  see this article in Celluloid Junkie.