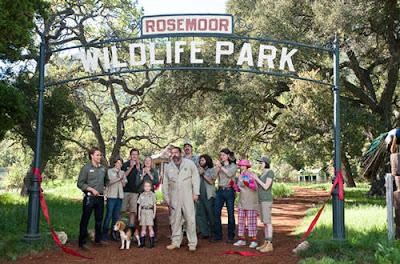 Benjamin and his children and the zoo staff work together to
overcome a myriad of obstacles to get the zoo ready for opening day.
© 2011 20th Century Fox
Because it was released just a few months after the comedy Zookeeper, I expected little from this film dram/comedy. Again, what a surprise, to be so unexpectedly deeply moved by a film that does have its light moments, but deals so insightfully with grieving over the loss of a loved one. The screenplay by Cameron Crowe (remember his Jerry Maguire?) and Aline Brosh McKenna is based loosely on British journalist Benjamin Mee’s memoir. The locale is moved from Britain to Southern California, which is a good thing in that star Matt Damon does not have to strain for a British accent.
Damon is excellent as the California widower and father of Dylan (Colin Ford), his moping 14 year-old son, and Rosie (Maggie Elizabeth Jones), his cheerful seven-year-old daughter. Memories of wife and mother Katherine (played in flashbacks by Stephanie Szostak) are still fresh and painful, with virtually every restaurant and place in the area associated in Benjamin’s mind with his wife. Thus when Dylan’s uncooperative attitude and dark artwork lands him in trouble at school, Benjamin determines to move from the area, despite the advice from his brother Duncan (Thomas Haden Church). This means giving up his globe-trotting job as an adventurer reporter.
Duncan is virtually horrified to learn that his brother has decided to buy an old house on 18 acres of land that contains a rundown zoo. Dylan is equally upset at the prospect, not wanting to move away from his frriends, even though he has been expelled from his school. Little Rosie, however is almost ecstactic over the prospect, her exclamation as they drive away from the property giving the film its name, “We bought a zoo!”
Despite a welcome sign posted in the window of the café just outside the property, the skeleton staff that has stayed on without pay to maintain the animals is skeptical about the new owner. Head of staff Kelly Foster (Scarlett Johansson) is especially doubtful that a person with no prior experience with animals is capable of surmounting all of the formidable obtsacles that have led to the zoo’s closing. However, when Benjamin whole-heartedly joins in the day to day labor, and eventually risks all of his family inheritance to meet the zoo’s financial debts and mandated cost of improvements, she and the others come around. Not needing any such persuasion is Kelly’s 13-year-old cousin Lily (Elle Fanning), the girl who posted the welcoming sign on the day of the family’s arrival. Drawn to Dylan, she will have a difficult time overcoming his desire to go back to his old home.
Although the struggle to fix up the zoo so that it receives the okay of  the gruff state zoo inspector (John Michael Higgns’ Walter Ferris is closest to a villain in the film) is what drives the plot, the emotional heart of the story is Benjamin and Dylan’s grieving over the death of their loved one and its negative impact on the father and son relationship. This is well displayed in the sequence in which Benjamin resists ordering the terminally ill Bengal tiger to be put down. He has become quite attached to the creature. He faces the majestic animal at one point and urges the suffering big cat to get up and fight against his illness.
His final acceptance that the tiger must be euthanized is the turning point in his battle to let go of his grief over the loss of Katherine. In a beautiful celebratory flashback to earlier days Benjamin reruns in his mind the home movie clip of his wife and young children expressing their love of life through dancing around together. Graced with an ending sure to touch the heart, rarely has letting go been so beautifully rendered on screen.
Related to the the theme of letting go and moving on is that of courage, necessary in order to move on into uncharted territory. As Benjamin says, “You know, sometimes all you need is twenty seconds of insane courage. Just literally twenty seconds of just embarrassing bravery. And I promise you, something great will come of it.” I suspect that every one of us, when facing something new, uncomfortable because of the risk, have had to find somewhere the courage to take the next step.
All those looking for a really good family film should turn out and support this movie. The charming performances of the child actors, Colin Ford, Maggie Elizabeth Jones, and Elle Fanning will win the hearts of young and adult viwers, as will the various animals, many of whom, such as Buster the bear, Solomon the lion, and Spar the ailing tiger have distinct personalities. The human characters and story are secular, there being no hint that any of them turned to faith for dealing with death and sorrow, and yet people of faith will find much to embrace in the honest and open portrayal of the grieving process and the need to move outside one’s own perspective and feelings in order to heal the wounded soul. The zoo, the animals, and the dedicated staff all draw the attention, first of Benjamin and Rosie, and then at length, of Dylan, so that they all become caught up in a larger struggle than their own personal ones. Do not miss this film!

A version of this review with discussion questions is available to subscribers of visualparables.net.