Do not human beings have a hard service on earth,
and are not their days like the days of a laborer?


Go, eat your bread with enjoyment, and drink your wine with a merry heart; for God has long ago approved what you do. 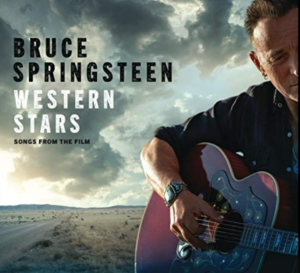 This stirring semi-public concert documentary, directed by Bruce Springsteen and his frequent collaborator Thom Zimny, includes 13 songs and commentary by the singer on life and the American Dream, love and loss, and the values he cherishes of the Old West, or as he himself states,  “a meditation on the struggle between individual freedom and communal life.”  The film makes a good companion to the singer/composer’s new record album of the same name—and it adds one song not written by Bruce but given the content of the previous 13 songs about would be singers and faded B-grade movie stars, is perfect.

The film well illustrates the individual and the communal in that most of the singing is done by Springsteen, but to his right are his wife Patti Scialfa (most of the time) and back-up musicians, and to his left a 30-piece orchestra of strings and brass. Although Nashville old timers are probably critical of the addition of such an orchestra, the musicians, all clad in black like Bruce and Patti, contribute hugely to the impact of the music, the camera often cutting over to them as their notes soar to the high rafters of the barn and beyond. There’s a clip of the two celloists playing that is especially memorable. If the film were more successful, it would no doubt add more adherents to his following as well as satisfy his fans.

The title song begins with a faded movie actor reminiscing in a bar about his past with words repeated several times during the song, ”I woke up this morning just glad my boots were on” as he goes on to express his gladness at still being alive. A woman in the bar vaguely recognizes him from a credit card TV commercial, but for him his claim to fame is “Once I was shot by John Wayne, yeah, it was towards the end. That one scene’s bought me a thousand drinks, set me up and tell it for you, friend.”

Part of his introduction to “Moonlight Motel” includes home footage of Springsteen and wife  having fun together, which makes the song all the more poignant as in the song a man pulls up to the motel where he and his lover had enjoyed a good time, but now the place is abandoned, with dandelions growing out of cracks in the swimming pool. Now his beloved is gone—by death or divorce, the singer doesn’t indicate—he remembers her saying, “’That it’s better to have loved, yeah, it’s better to have loved’/As I drove, there was a chill in the breeze/And leaves tumbled from the sky and fell/On a road so black as I backtracked/To the Moonlight Motel.”

We know right away in “Somewhere North of Nashville,” that it is the song of a failed musician,” Came into town with a pocketful of songs/I made the rounds/But I didn’t last long.” It adds to the poignancy of the song made popular by Glen Campbell and with which Bruce concludes his concert, “Rhinestone Cowboy.” Campbell’s character dreams of making it big as a singer and knows “There’ll’ be load of compromisin’/On the road to my horizon.” In “…Nashville” Bruce’s singer does not make it big, so he sings,” I lie awake in the middle of the night/Makin’ a list of things that I didn’t do right.” His “compromisin’” included giving up his beloved, “I traded you for this song.” So, now he is “somewhere north of Nashville” filled with longing and regret.

But you will not regret watching this film—when you can find it. I was so surprised that I was the only viewer in the Cincinnati theater. Granted, it was an afternoon, but this was a Bruce Springsteen film; surely there are some fans able to get away during the daytime! As I feared, the film was dropped from the following week’s schedule. Hopefully it will soon be available on streaming video or DVD. If you have any interest in this singing philosopher or his music, it is worth the search or the wait. This is a MUST SEE film for  lovers of Bruce Springfield’s soulful songs.

Due to the current inaccessibility of the film, there are no set of questions for reflection and/or discussion

This concert doc. intersperses Bruce Springsteen, his wife & a 30-member band playing in his barn with shots of the West, home videos, & Bruce commenting thoughtfully.
Editor Rating ★★★★★5 out of 5
More Details