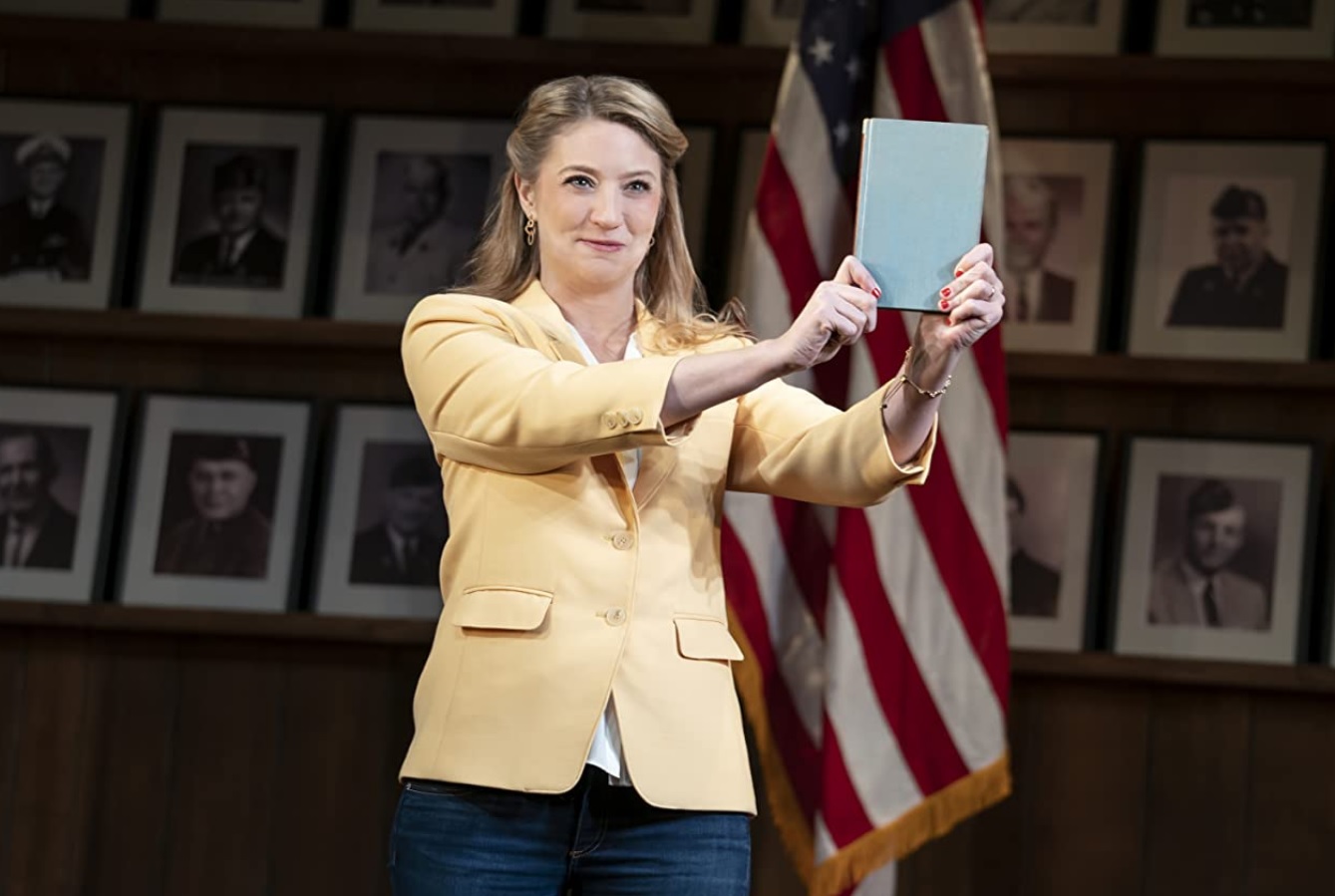 You must not be partial in judging: hear out the small and the great alike; you shall not be intimidated by anyone, for the judgment is God’s.


The title of actress/writer Heidi Schreck’s Broadway hit suggests that her one-person (almost) dramedy must be very personal, and we soon see just how deeply personal it is. Attired in a yellow school-type blazer, she takes us back to when she was a precocious 15-year-old competing in American Legion-sponsored “What the Constitution Means to Me” contests. She toured the nation, earning enough money to pay for her college education. The play’s only set is a recreation of the American Legion Hall in her hometown of Wenatchee, Washington where she won her laurels. The walls are covered with framed photographs of the Legionnaires, all, of course white men. To complete her sense of being completely surrounded by white dudes, she invites the audience to imagine that they too are all white guys.

The actress/playwright often breaks the “4th wall” by speaking to the audience, such as when she asks everyone in the audience to raise their right hands if they are citizens. She then says that those who are white males who own property, should put their hands down. To those with their hands still up, females and persons of color, she states that they would not have been included in the Constitution that the men were writing back then. She will emphasize this even more later on when she takes on Supreme Court Justice Scalia and his theory of the original interpretation of the founders. She interjects considerable humor, such as her teenage fascination with witches and the famous play about the Salem Witch Trials that influence her view of the Constitution as” a crucible.”

Removing her blazer, Schreck moves from her idealistic 15-year-old self to her middle-aged female self who has learned from experience and history the flaws of its white male writers, creating a document that “was designed to protect the men who made it and their property — which was sometimes people — from the government.” She dwells mostly on the 9th and 14th amendments. The first of these says, “just because a certain right is not in the Constitution doesn’t mean you don’t have that right,” which became the means for expanding of the rights of racial and sexual minorities. Amendment 14 promised everyone in the U.S. — immigrants included, “due process of law.”

She shares the history of four generations of women in her family and how they reacted to spouse abuse. She even shares her own experience of her ambiguous date rape, followed by an abortion when she was 21 and—and more. The series of Supreme Court cases involving women’s rights that she cites is especially eye-opening. One involved a Midwestern wife whose armed, abusive husband seized their three children. When she called the police, they did not respond. The husband killed the children, and when the police department refused to accept any responsibility for the deaths, she sued, the case argued all the way up to the Supreme Court. Schreck plays a tape recording of a portion of the Judges discussing the meaning of the word “shall,” as in the police “shall protect the citizens.” The audience laughs at the many times the men clear their throats, but Judge Scalia’s parsing of “shall,” reminding one of Bill Clinton’s parsing of “is” during his Impeachment trial, reveals how inhumane the men on the high court can be by ignoring the plight of the female plaintive.

Schreck also plays an audio clip from a 1965 Supreme Court recording made before Judge Sandra Day O’Connor broke the Court’s sex barrier. “Here are nine men deciding the fate of birth control, four of whom are cheating on their wives,” she says, making us realize how out of touch the justices were with the female half the population. On a lighter vein, she includes a tape of the late Justice Ruth Bader Ginsburg, whose wry answer about the right gender balance of the Court will make you laugh along with the audience.

The play was relevant in 2019 when it opened, and the film is even more so today. Almost simultaneously the film debuted on Amazon prime when at the Senate Judicial Committee hearing Amy Coney Barrett was asked about her “originalist” view and what the Constitution means to her. It was Justice Scalia, earlier pilloried by Schreck, who had mentored Mrs. Barrett. From the history and the personal experiences presented in the play we see that we as a nation can both move toward gender equality and also away from it.

Director/actress Marielle Heller  marvelously takes us into the audience as well as placing us close to the actors on stage.  From various shots of the audience we see how emotionally drawn into it some members are. One young woman clearly is crying a bit as Schreck shares intimate details of her life, and then breaks out in laughter at one of the presenter’s hilarious observations.

This is almost a one-person dramedy. Two others also share the stage with its creator. Mike Iveson is on stage virtually the whole time as the American Legionnaire who asks her questions and makes sure she “follows the rules.” Then, well into the play, he takes off his Legionnaire’s cap and his glasses to assume the role of one of the teenage men she had known, and then a further revelation that he is a gay, a subject also very much part of the play’s analysis of the Constitution and its more recent, and tenuous, protection of the LGBTQIA+ citizens. Still later the focus shifts from Heidi Schreck’s generation to the upcoming one, wonderfully represented by top debater Rosdely Ciprian, a New York high schooler and debater. She and Schreck ably debate the question of whether or not the Constitution of the United States should be abolished. Even the audience is brought into this.

Heidi Schreck leads us to examine the foundation document of our country in a way that most of us have never done before. Both racially and sexually it was deeply flawed, she reveals, and thus easily used by men as a tool for oppression. (I recall reading a biography of William Lloyd Garrison in which the great Abolitionist damned the Constitution and at one rally burned a copy because of its acceptance of slavery. Slave owners, relying on the Constitution to justify their pursuit of runaway slaves into Northern states, were able to pass two Federal Fugitive Slave bills that made it a crime to assist a runaway or resist their pursuers!)

And yet, the Constitution can also be a tool for liberation as well. After seeing this play, one might see how high the stakes are in appointing judges to the courts, especially the Supreme Courts. Should they espouse the originalist view, progress toward racial and gender equality could very well be set back for decades. Thus, this filmed version of her prophetic play is important and should be seen by as wide an audience as possible.

In this filmed stage play Heidi Schreck shares her personal and family history in relationship to the use and misuse of the US Constitution from its beginnings, esp. in regard to women and gays.
Editor Rating ★★★★★5 out of 5
More Details