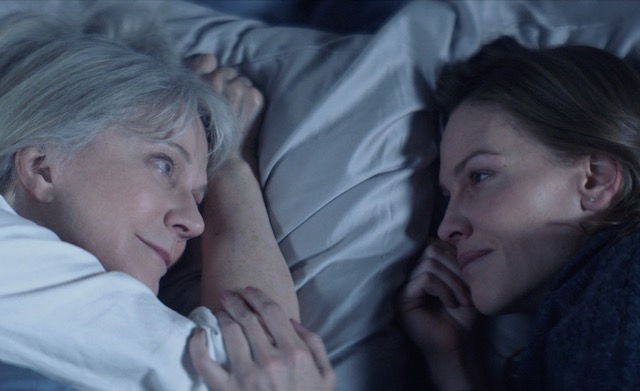 Then Job arose, tore his robe, shaved his head, and fell on the ground and worshiped.  He said, “Naked I came from my mother’s womb, and naked shall I return there; the Lord gave, and the Lord has taken away; blessed be the name of the Lord.”


…for he makes his sun rise on the evil and on the good, and sends rain on the righteous and on the unrighteous.

Writer-director Elizabeth Chomk really captures the anger and angst of a family trying to deal with a beloved wife and mother entering the last stages of her dementia. Blythe Danner stars as Ruth, a senior-care nurse long married in Chicago to her adoring husband Burt (Robert Forster). Early one snowy morning, clad in just a nightgown, she leaves her apartment and gets on a train heading for her childhood home, which exists now only in her mind.

The couple’s grown son Nicky (Michael Shannon), who has stayed in Chicago and thus born the burden of his mom’s ailment and his father’s refusal to face it, says it’s time to get Mom institutionalized. Burt cannot stand the thought of this, insisting he can handle the situation—despite evidence of his failure to contain her inside their home. Daughter Bridget (Hilary Swank), who has just come in from Los Angeles with her own daughter, Emma (Taissa Farmiga), complicates matters. She has rushed there because she was summoned by Nicky. Besides the usual sibling rivalry—they call each other such names as “turkey” and “dingle-fairy”—there is the brother’s resentment over having to deal alone on a daily basis with his forgetful mother and reluctant father. And it is Bridget who was given the power of attorney over her parents, so she will cast the deciding vote on the fate of their Mom. Nicky argues that Mom now needs professional care, while Bert declares, “What she needs is her home.” He is a retired working class guy brought up on the gospel of self-reliance. For several decades he has devoted himself to Ruth, so he cannot imagine life without her. He just cannot let go.

Bridget is struggling with issues of her own—daughter Emma has been expelled from her college dorm on charges of being drunk and disorderly. Plus, she is still resentful of her dad for pushing her into a marriage that she can no longer endure. During her stay she acts out her resentment by flirting with an old boyfriend, though it is clear she is just using him.

Reportedly playwright Chomk based her story on her grandparents, so there are some unusual touches in the film. Nicky reports, “Mom hit on me,” which strikes Bridget as amusing, but her Catholic father as terrible. At the dinner table Ruth tells the family, “I’m having a baby,” and the children smile. Ruth does too. There are other instances when Ruth is lucid, able to recognize her loved ones. One of these lucid exchanges becomes a sensitive moment of grace.

The cast is uniformly excellent, Blythe Danner convincing as a woman whose mind is so buried in the past that she only occasionally is aware of the present, and totally oblivious to the future. Michael Shannon captures the spirit of a son too long under the power of a stubborn father who still disses him by referring to him as a “bartender,” never acknowledging that he is the owner of a very successful tavern. Robert Forster is the anguished husband who desperately tries to ignore what has happened to Ruth. “She’s my girl,” he pleads when told they will have to be parted for both their sake.

Hillary Swank is outstanding as the daughter who has long been too passive under her father’s oversight. She is now very dissatisfied with the career-obsessed husband she had been pressured to marry. Very impressive is the scene in which she looks over the many photographs of Burt and Ruth displayed around their apartment. Her facial expression reveals that what they had was far better than her own bleak, unhappy marriage.

Both the setting and the photography are important for the emotional impact of this beautiful film. It is Christmas, a time of merriment and family reunions, but this family is so caught up in their troubles that they scarcely notice the jolly season. The story is set in Chicago, with its blustery winter weather, so the colors are muted by the snow. The gallows humor also adds to the humanity of these troubled people struggling to find a mutually agreeable solution to a problem for which there is none.  They do arrive at a measure of reconciliation and resolution, but not of the Hallmark TV kind.

Be prepared to shed a tear or two, and to reflect upon their situation. Though Burt still seems to retain some of his Catholic faith, he does not find it of much solace in the midst of his current dilemma. Some would have turned to their clergyman or fellow believers for support, but not he. Perhaps it is that myth of self-reliance too deeply embedded in him. Probably none of the family would find meaning in Job’s or Jesus’ words quoted above. This is a secularized family trying to decide what is best for both Ruth, their beloved wife/mom, and themselves, with only themselves to fall back on. That they do as well as they do is impressive–and moving to witness. That this is Elizabeth Chomk ‘s first film as a director bodes well for film lovers. Let’s hope there will be many more to come.

What to do with the demented Ruth brings a Chicago family together & opens old wounds & resentments between the husband & 2 grown children.
Editor Rating ★★★★★5 out of 5
More Details