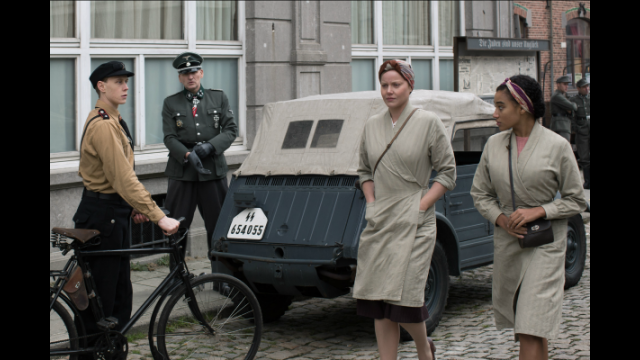 
A leper came to him begging him, and kneeling he said to him, “If you choose, you can make me clean.” Moved with pity, Jesus stretched out his hand and touched him, and said to him, “I do choose. Be made clean!” Immediately the leprosy left him, and he was made clean.


“There are days when you wonder what your role is in this country and what your future is in it.

Writer/director Amma Asante hooked me for good by beginning her film about the Holocaust era in Germany with the quote from James Baldwin. Though this film is set in 1944 and Baldwin’s words were written some two decades later in America, they connect the Nazi era directly with our own–today some people still march in torch-lit parades chanting “Jews will not replace us!” and “Jews out!”

Ms. Asantehooked’s contribution to the Holocaust genre is the revelation that in Germany there were some 25,000 “Negro” or mixed race sons and daughters of liaison’s between German women and French African soldiers who were part of the occupational force in the Rhineland after World War I. Our fictional story focuses on one of them, 16-year-old Leyna (Amandla Stenberg) living with her German single mother, Kerstin (Abbie Cornish), and her younger brother Koen (Tom Sweet). Though she loves Koen, born of a German father who is for some unknown reason absent from their lives, she feels especially protective of her olive-skinned daughter with her hair so obvious Negroid that the girl sometimes wears a scarf to conceal it. Leyna considers herself fully German, but by their stares most people who cross her path obviously consider her otherwise,

At the beginning of the film, set in a small town, Kerstin has hidden Leyna underneath the floorboards while the Gestapo search for her in vain. They are there to seize and force her to be sterilized as the law demands of such mixed race people.

Kerstin moves the family to Berlin in the hope that in the metropolis they will not stand out as much, but of course, this will prove to be in vain. The two work in a factory, but each time they arrive or leave there are police looking for Jews and others who might not have the proper papers. Kirsten visits her sister whose husband is in a position to obtain false papers declaring that Leyna has been sterilized. The man reluctantly complies with her wish but demands that she never contact them again. Leyna is regarded by relatives as “unclean” as was any leper leaving in New Testament times. The hostile stares of many who pass Leyna on the street concur.

Not so, however, in the case of a Hitler Youth boy named Lutz (George MacKay), who accidentally runs his bicycle into her one day as she and her mother are walking home. He is the son of a Nazi SS officer, Heinz (Christopher Eccleston), and thus thoroughly indoctrinated with Nazi racism—and yet something about the beautiful girl brushes all that aside. Over time he manages to meet up with her and learn her name. He keeps their slowly evolving relationship a secret from his father as long as possible. The two of them manage to sneak away for a swim, and in his family’s apartment after dancing to forbidden music, Lutz and Leyna’s passion leads to sex.

The circumstance leading up to the tryst is highlighted by a fact that makes both Lutz and his father Heinz a little more complicated than the stereotypical Nazi movie villain. The father has hidden away some jazz records, and Lutz, his ear to the floorboards, has been listening to them along with his father, though not with the father’s knowledge or consent. During one of their secret meetings Lutz tells Leyna that she looks like one of the beautiful women on an album cover. He even sings to Leyna a few lines from one of her songs, “Let’s Call a Heart a Heart.” At the apartment Lutz takes out the album, and we see that the woman on the cover is Billie Holliday. The couple are able to forget their harsh world for a moment as they embrace and dance to the song. But when Leyna asks how she might fare in America, Lutz says, “They hang people who look like you in America.” For pariah’s like Leyna there is no sanctuary anywhere, not even in a supposed democracy.

Lutz’s father, of course, is upset upon learning of his son’s interest in Leyna. Though apparently accepting most Nazi ideology, he is not so devoted to Hitler that he is eager to risk his life for him. Apparently something about the results of Nazi policy is difficult for him to accept, as he advises his even less satisfied son, “Wear the mask you need to survive the war.” (I couldn’t help but think of Paul Lawrence Dunbar’s famous poem about Black survival in oppressive white America, “We Wear the Mask” at this point!) His worry about the relationship with Leyna is set aside by Lutz’s being called up to serve in the army, something the boy had wanted so he could serve his country.

Although less a central figure, Kirsten’s plight is well dramatized, thanks to the skillful acting of Abbie Cornish. While she fiercely tries to protect her daughter, warning her of the dangers of loving the son of a Nazi, she is also deeply concerned about the poisonous ideology being poured into the young mind of her son Koen. Like all German boys, he is compelled to join the Hitler Youth. She talks with him as he is about to go to his first meeting, reminding him not to forget what his mother has been teaching him. This subtheme will become lost amidst subsequent events that include Kirsten’s being arrested and carted off, Leyna leaving Koen with relatives, and Leyna’s own arrest and incarceration in a slave labor camp.

The labor camp is adjacent to a Jewish death camp, from which Leyna can see black smoke rising from its tall smokestacks. The white flakes slowly floating earthward could be mistaken for snow, but when the girl catches one and opens her hand, it is readily apparent that it is ash. She forms a friendship with Hermine (Olivia Vinall)  a girl who badly needs food and new shoes. She also discovers that her tryst with Lutz has resulted in her being pregnant, so her new friend tightly wraps strips of burlap around her torso to keep her condition secret as long as possible. This crucial because according to her forged papers, Leyna has ben sterilized.

Conditions at the camp—of starvation, brutal beatings and sudden killings—are typical of Holocaust movies—and it is even revealed that Hermine is a Jew who thus far has been able to keep her heritage secret. Then in an unlikely coincidence both Lutz and Heinz are assigned to the same labor camp as Leyna. The boy is upset that he has not been sent to fight but to be a guard instead. Seeing the cruelty wreaked on the prisoners, he tells his father that this is not what a soldier does. He is to fight soldiers, not civilians. Like a true Nazi, Heinz replies that a soldier does what a soldier is ordered to do. Just how much the man believes this we will see later, much to our horror.

Lutz recognizing his lover, comes upon her just in time to save her from execution by a brutal guard who has caught her sneaking a potato from the kitchen where she works. What happens during their subsequent clandestine meetings and the deteriorating conditions on the now not so distant battlefield I will leave for your discovery.

The film has been criticized for romanticizing Nazis, but I find this hard to understand, especially in regard to Lutz. Although the film is mainly about Leyna’s coming of age as she desperately wrestles with her desire to belong—she is indeed a social leper needing a Christ willing to touch her, something that Lutz is very willing to do—it also suggests that a Nazi can overcome his ideology with the right motivation. In a way, this is a Romeo and Juliette story, with each of the characters a member of a group hating the other. One critic suggests that Lutz should have been depicted as a Jew, making their romance more acceptable. However, this would be to miss the point of the film, that love, even erotic love, different from and yet related to “agape love,” can bridge gaps. Bringing opposites together.

Ms. Asante earlier dealt with racial mixing in two excellent films, Belle and A United Kingdom, and now we have a third. Maybe not quite as good as those two, and yet certainly moving and causing us to think—about the “unthinkable” and the possibility of love existing in the midst of so much hatred. The bittersweet ending, I suspect, will stay with you for a long time. Best of all, the film will strengthen the resolve to expose and oppose those who, though in disguised form, persist in spouting the Nazi’s racist views.

An Afro-German girl in Nazi Germany facing scorn, yet loved by a Hitler Youth, is sent to a labor camp after protective her mother is arrested.
Editor Rating ★★★★★4 out of 5
More Details