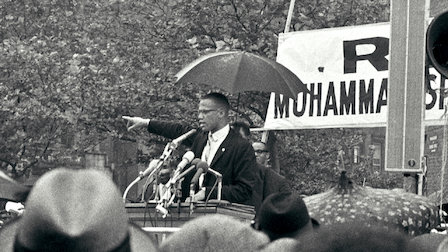 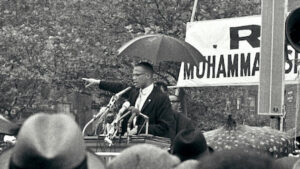 Documentarians Phil Bertelsen and Rachel Dretzin open their six-part mini-series with a montage highlighting racist practices in America during America’s post WW 2 period. The series then focuses upon the thirty-year search by historian/ activist Abdur-Rahman Muhammad for details about the real killers when Malcolm X was assassinated in Harlem’s  Audubon Ballroom. on February 21, 1965.  Here is the list of episodes with a link so that you can read a brief summary of each one:

In the sad case that you have not seen Denzel Washington’s great portrayal of the activist in Spike Lee’s 1992 film Malcolm X, you will learn much about how Malcolm Little was caught up like so many young black men in a life crime and then sent to prison, but it will not be as dramatic, so I urge you to see it as a companion piece. Even before that he suffered from racism, his father murdered by whites and a white teacher guiding him toward a trade when the boy said that he wanted to enter a profession. Lee’s film clearly shows how the man was always a work in transformation—a thief, a convict, a rabid believer in racial separation, a rebel when discovering the corruption of his leader, and an activist for human (and not just “Negro”) rights.

The new miniseries deals mostly with Abdur-Rahman Muhammad’s three-decade mission to uncover all the facts and the many flaws in the official theory related to Malcolm X’s assassination. This will involve the racist NYC p[olice as well as the FBI, with the latter well-known to have a vendetta against Black leaders. His quest will take him to a certain nation of Islam Mosque in Newark New jersey where a leader allegedly part of the assassination team roamed free for many years and rose to a prominent position in the community, while two of the three men convicted of the murder languished in prison—this despite the man who admittedly pulled the trigger testifying that they were innocent.

One of the falsely convicted has died, but the other has recently been set free. This film series helped arouse interest in the case again, thus making it truly a movie that matters.

No questions for this review. Those wanting to watch & discuss the issues raised in the series will find that many of the questions accompanying my review of Spike Lee’s  Malcolm X, can be used.

This documentary follows an activist intent on proving that 2 men imprisoned for killing Malcolm X are innocent & real killer was free living in Newark.
Editor Rating ★★★★★4.5 out of 5
More Details