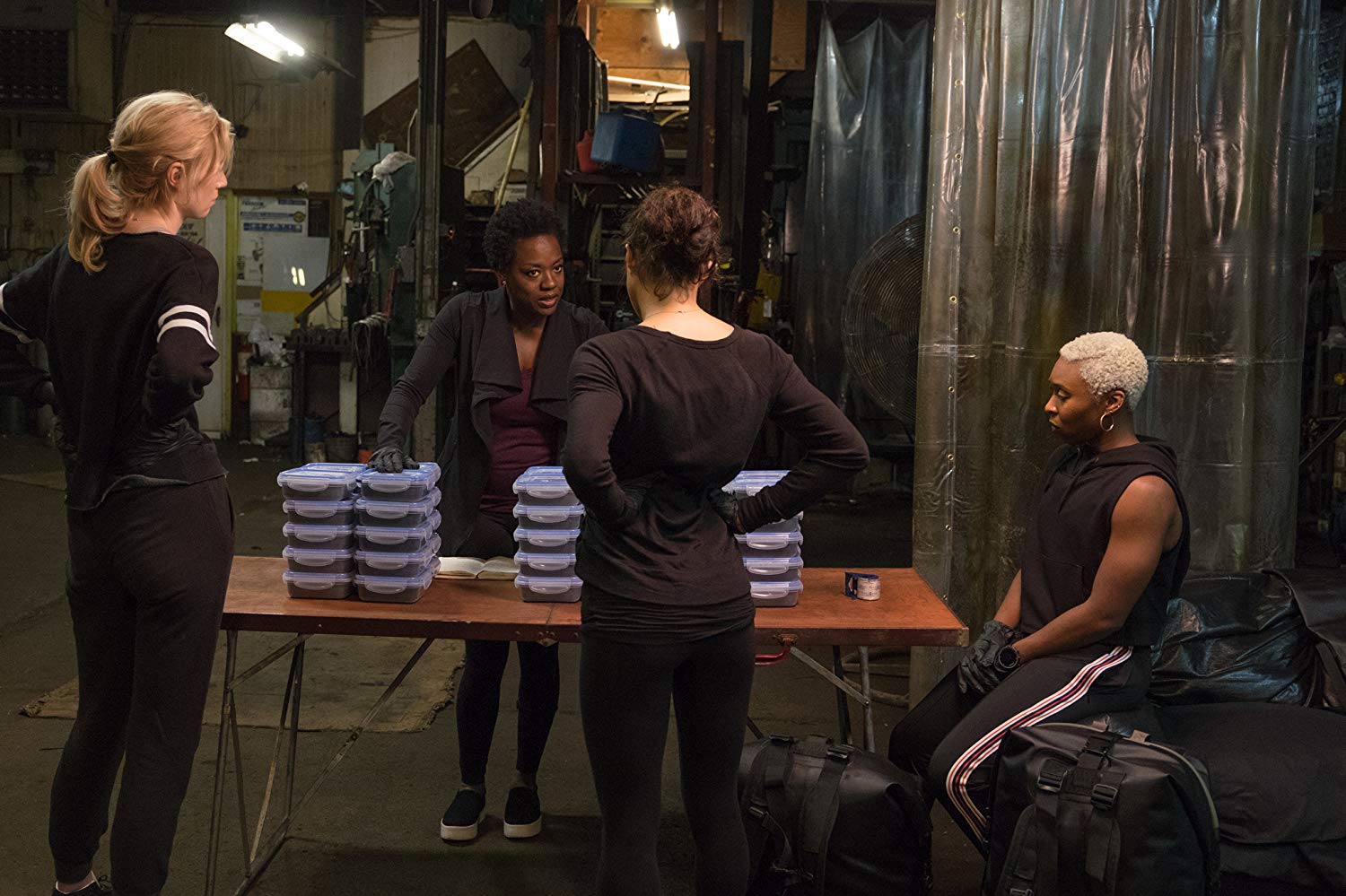 You shall not abuse any widow or orphan.  If you do abuse them, when they cry out to me, I will surely heed their cry

South Chicago thug and would-be politician Jamal Manning (Brian Tyree Henry) pays no heed to the concern for widows mandated in the Book of Exodus. Forcing his way into the newly widowed Veronica Rawling’s (Viola Davis) luxurious apartment, he informs her that she owes him $2 million. He menacingly picks up and holds her pet dog Olivia in his arms, stating that his money was stolen and then burned up in a failed robbery planned by her dead husband. He needs the money for his political campaign. He gives her a couple of weeks to come up with the it—or else. He dangles the little dog by its collar to show he means business.

How Veronica became a widow we see in the film’s quick-paced prologue of inter-cut scenes. Harry Rawlings (Liam Neeson) is in bed kissing Veronica. Jump to the recent past with Harry and fellow robbers fleeing the cops through Chicago’s streets and winding up in a garage. They hastily move the bags of money into a van. But when they open the doors to drive away the cops are waiting for them and promptly fire into the van. The driver is killed instantly. The van catches fire and explodes, killing the other robbers. Cut from the noisy death scene to a sorrowful Veronica quietly staring at Harry’s now empty side of their bed.

Also widowed by the exploding van are Linda (Michelle Rodriguez), married to Carlos Perelli (Manuel Garcia-Rulfo). They own a shop and have two children, but when she comes in to work, she finds that goons are taking away everything because her husband was behind in paying his debt. Alice Gunner (Elizabeth Debicki) had been abused by her husband Florek (Jon Bernthal), though afterward he was sweet to her again. Amanda (Carrie Coon) was married to Jimmy Nunn (Coburn Goss), who in another flashback kisses her goodbye as he sets forth to join the other robbers.

When she is given her husband’s notebook in which he had written the detailed plans of his heists, Veronica discovers the details for his next heist. It is to steal $5 million a mansion, address unknown. There is a clue, a name on the portion of s diagram of the site. She contacts the other widows and proposes that they use the plan to steal the money and split the $3 million that will be left over from her debt to Jamal. All join in, except for Amanda who does not show up at the initial meeting. One of the women is assigned to track down the address, and another to purchase guns. The women are total amateurs in such undertakings, resulting in considerable humor.

Jamal Manning is attempting to become the first African-American alderman for the 18th ward. His opponent is Tom Mulligan (Colin Farrell), whose corrupt father Jack (Robert Duvall) has been the alderman for many years, even though most of the population is black. For political purposes the Mulligans maintain a house in the ward as their alleged residence. We soon see that there are serious issues between father and son. Tom, a bit less racist than his old school father, is trying to curry favor with the black residents by sponsoring a funding program for women entrepreneurs.

How all these people are interconnected by the money burnt up in the van eventually becomes clear as the complicated plot unfolds. There are two more characters that are important–Jamal’s brother Jatemme (Daniel Kaluuya), a cold-blooded psychopath whom we see execute the two minions who had failed to prevent the money from being stolen; and Belle (Cynthia Erivo), an African American beautician who is recruited by the widows to be their driver when Amanda fails to join the band. Even the little dog Olivia plays an important part in a shocking revelation during Veronica’s visit to Amanda’s apartment.

The performances of the ensemble cast are excellent, making us believe the pulp fiction plot. Music and camera technique also contribute greatly. A great example of the latter is the sequence in which Tom Mulligan is talking with his chief aide as they are driven through the ward. The camera, instead of showing the two speakers inside the car, is mounted on the hood thus showing the highly reflective windshield. In it and around it we see the neighborhood change as the car moves from the slum’s dilapidated houses and buildings into the spacious homes of the neighboring white section where the Mulligans actually reside.

This is a heist film every bit as complicated as the Ocean films­, but with more social justice themes, thanks to the script co-written by Steve McQueen and Gillian Flynn. It is, based on British writer Lynda La Plante’s 2002 TV miniseries of the same name. Moving the setting from London to Chicago, the co-writers have cleverly worked in such American concerns as city ward politics, interracial marriage, white cops pulling over and shooting a black son, the struggle of the underclass to make ends meet, wife abuse, and female empowerment. Mr. McQueen thus appeals to two audiences, those who love action thrillers with their exciting shoot-outs and car chases and those who are drawn to films dealing with important issues and feature complex characters. The widows in this film are not the helpless women championed by the writers of the Hebrew Scriptures. Veronica and company do not look to Yahweh for help. They help themselves. Woe to the men who get in their way!

This review is in the December issue of VP along with a set of questions for reflection and/or discussion. If you have found reviews on this site helpful, please consider purchasing a subscription or individual issue in The Store.