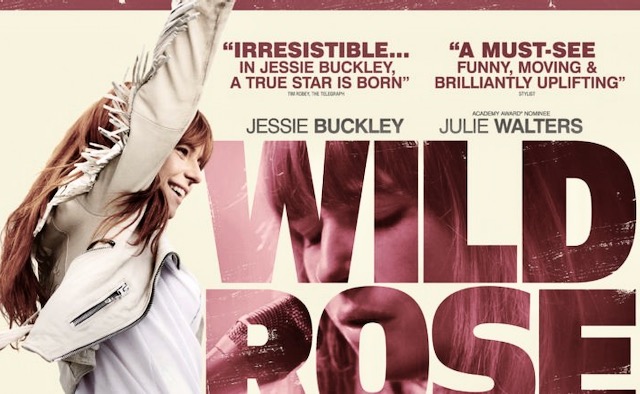 We music lovers have been blessed this year with so many good films filled with memorable music—witness this issue with reviews of Yesterday, Pavarotti, and Echo in the Canyon, and now British director Tom Harper and screenwriter’s Nicole Taylor’s Wild Rose with its toe-tapping country music. Also, what a revelation its star is, Irish actress Jessie Buckley, with a voice that actually could win her a spot at Nashville’s Grand Ole Opry!

Although Rose-Lynn is a Scot, she is from the same lower-class origin as Loretta Lynn in Coal Miner’s Daughter, and her struggle to rise above her class is akin to the American’s.

The story is set in Glasgow, Scotland, though Nashville is the city that 23-year-old Rose-Lynn Harlan (Buckley) has her heart set on. At one point she muses, “I should have been born in America.” Dressed in a fringed white leather jacket and matching cowboy boots, she had been rousing crowds in the city’s Country-themed bar until her arrest on a drug charge.

The film begins with her release from prison and the reissue of her signature clothing after serving out her one-year sentence. She is not entirely free because she must wear a tracking device beneath her gleaming white boots. Her two children are in the care of her mother Marion (Julie Walters), but Rose Lynn’s first stop is to visit her boyfriend Elliot (James Harkness) for a sexual tryst.

Rose-Lynn loves country music because it is “three chords and the truth.” She has Harlan Howard’s famous slogan tattooed on her arm, and even has named her daughter and son after two Nashville legendary performer– Wynonna (Daisy Littlefield) and Lyle (Adam Mitchell). However, she has so neglected them that when she returns neither the 8-year-old daughter nor the 5-year-old son welcome her back. Nor does she know how to relate to them, locked into the bubble of her selfish dream is she. Thus, the film is not only about an underdog’s dream for musical success, but also about a woman’s long journey to maturity and loving relationships.

Rose-Lynn soon finds herself on the other side of Glasgow, employed by the wealthy Susannah (Sophie Okonedo) as house cleaner and helper with her two children. A scene in which Rose-Lynn, encased in her country music bubble by singing and dancing across the floor while vacuuming, her ears covered by earphones, is a delight. We even see her musical fantasy enhanced by the camera showing various country band members in various rooms pumping out the accompanying music.

Susannah takes on the role of fairy godmother in this Cinderella story when she overhears Rose-Lynn’s singing and becomes an instant fan. She tells her she will help fulfill her Nashville dream by hosting her friends at her upcoming birthday party and asking them to donate to her trip in lieu of a birthday present. It is a generous offer but has been made with the giver unaware of Rose-Lynn’s criminal past. However, her suspicious husband has done some research on his wife’s new friend, and…but then the plot takes a very unexpected twist, lifting the film above the usual breaking into show biz tale.

The last third of the film continues to undercut the expected outcome, even though Rose-Lynn makes it to Nashville, sending the film into far more subtle and deeper territory than the usual trope. Though Jessie Buckley dominates the film, veteran actress Julie Walters is vital in their scenes together, her disapproval of her daughter’s dream due to her concern that it has caused her to neglect the children being more important than her skepticism as to its viability.

What Rose-Lynn does eventually makes her story a wonderful example of Joseph Campbell’s The Hero’s Journey. Hers is not just an outward one of the almost 4000 miles from Glasgow to the Music Capitol of Country Music, but the more important inward one of the heart, or as the author(s) of Proverbs might have put it, from foolishness to wisdom. Rose-Lynn learns, in a non-religious sense, the truth of the Galilean’s teaching about losing and winning. The Rose-Lynn at the end of the film has come a long way, as her mother acknowledges when she tells her, “I wanted you to learn responsibility. I didn’t want to take away your hope.” If you are looking for a feel-good movie, look no further!

Scots Rose-Lynn wants so much to sing in Nashville that she neglects her two children in the care of her mother.
Editor Rating ★★★★★5 out of 5
More Details