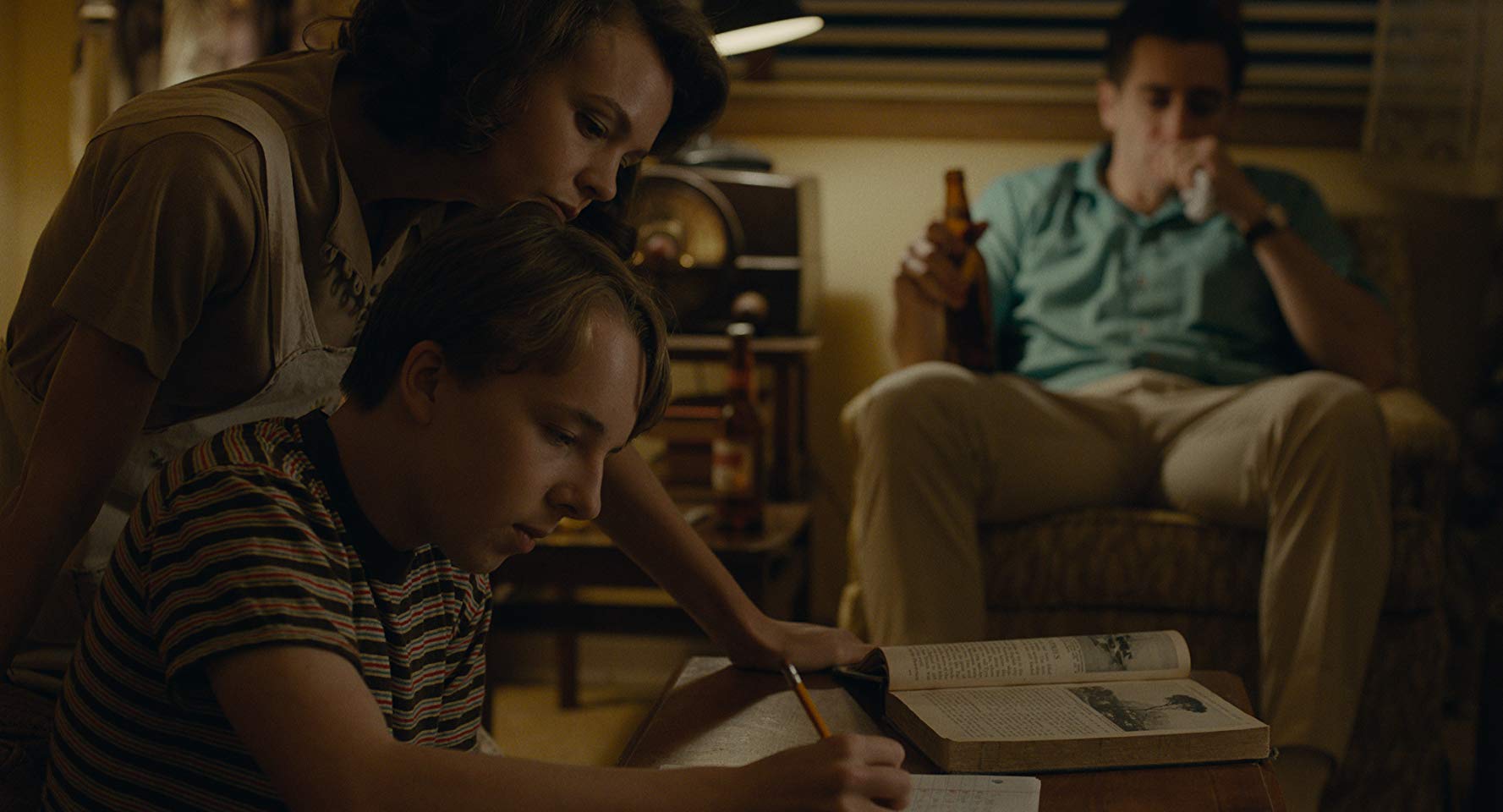 A good wife who can find?

She is far more precious than jewels.

Paul Dano’s first film as director is a sad but interesting study of the disintegration of the marriage of Jerry and Jeantette—and also could also be viewed as a case study in how not to be a parent. Carey Mulligan’s Jeanette Brinson is a wife and mother for whom I want both to root for and to shake until she comes to her senses. Set in the suburb of Greet falls, Montana in 1960, the film is an adaptation of Richard Ford’s novel by Dano and co-writer Zoe Kazan.

The faltering marriage of Jeanette and her husband Jerry (Jake Gyllenhaal) is seen through the eyes of their 14-year-old son, Joe (Ed Oxenbould) following the loss of his father’s job as the pro at a country club golf course. Although popular with the club’s clientele, Jerry’s boss thinks he is too forward with the members, and so lets him go. This apparently is one of a series of job losses, because, Jerry claims, he is “too personable.” The boss, apparently discovering Jerry’s popularity, calls to let him know he can have the job back. Jerry is too proud to return, declaring, “I won’t work for people like that.” He is also too proud to take any other local job, such as bagging groceries. He mopes around the house for a few weeks, drinking beer and staring off into the distance. Jeanette, anxious, as she might well be after he has uprooted them so many times, changes from supportive housewife mode to accusative mode. At last he decides to answer an ad for a low-paying job fighting a large fire in the distant mountains. Early in the film we had seen smoke from this, and the kids at Joe’s high school had spoken of it. Jerry’s departure precipitates the family crisis to which Joe becomes the unfortunate witness. He begins to understand and sympathize with his neglected mother as, both feeling abandoned, she begins to move out of her husband’s shadow.

Jeanette is shocked and then upset by Jerry’s arbitrary decision to go off for what promises to be a long separation. “What kind of man leaves his wife and child in such a lonely place?” Jeanette angrily asks. They have just moved into town, this one threatening to become one move too many. She tells Joe, “I feel like I need to wake up, but I don’t know what from… or to.” With Jerry unemployed she had taken work part-time at the local Y teaching adults how to swim. Now she must seek a better paying situation. Joe himself finds after school employment as an assistant in a portrait photographer’s studio.

Warren Miller (Bill Camp) is the new swimming pupil who is soon drawn to her. The owner of an auto dealership, he offers to hire her, or so Joe is told when his mother brings him home for dinner. A little later Warren invites both mother and son to his impressive home for dinner. Neither adult tries to hide their mutual attraction in the presence of the largely mute son. Jeanette literally lets her hair down, drinking too much and dancing seductively. When Warren joins her, Joe sees the flirtatious, sexual side of his mother that probably drew his father to her long ago. (At some point, she had told Joe that she had been a school teacher with a social life, telling him, “Your parents were not always your parents.”

Mother and son, after some weeks of Jerry’s absence do make the long drive to the site of the fire. They see lots of firemen and raging flames close by, but do not go looking for jerry himself. As they talk about his work and talk about why he became a firefighter, she asks Joe if he understands why. He says No, and she says, “I’m sorry we both can’t sympathize with him.”

By the time Jerry returns home he finds there a fire more deadly than what he had faced in the mountains. Jeanette’s relationship with Warren has moved from flirtatious to adulterous. Jerry reacts with a rage akin to his wife’s earlier one following his abrupt departure. Based on what he impulsively does, it looks as if the plot is heading toward even more violence and vengeance, but the story takes another turn. One less melodramatic but just as heart-breaking.

By the end of the film Joe is well on his journey toward mature adulthood, symbolized by the kindly portrait photographer allowing his now adept assistant to set up and take his first family portrait. The young man will henceforth have a totally different relationship with his mother and father due to the fracturing of his family. However, as with all of us children of divorce, I am certain that his coming of age will enable him to cope.

I probably was moved by the film because my own parents went through an angry divorce, though I was in grade school and not high school at the time.

The pace of the film is slow, allowing us to catch nuances of facial expressions and nods of the head. Each character is explored in depth, though we might wish to see more of Jake Gyllenhaal, who is off screen most of the time fighting the forest fire. Cary Mulligan and Ed Oxenbould are outstanding, the Oscar talk about Ms. Mulligan being deserved.

Director Dano does not judge the characters, even middle-aged Warren being depicted as kind to and interested in Joe. His story told to Joe about his flying experience when he turned off his engine so he could fly silently with a flock of geese reveals he is more than a letch. We can sympathize with all of the characters, especially Jeanette who embodies a woman emerging from the domesticity of the 50s and early 60s and heading toward the feminist storm of the 70s. We might not applaud some of her acts—certainly the man who wrote Proverbs 31:10 would not do so. But then he also should have written “A good husband, who can find?” A group of young marrieds could have a great time discussing this fine film in the light of these two questions.

This review will be in the December issue of VP along with a set of questions for reflection and/or discussion. If you have found reviews on this site helpful, please consider purchasing a subscription or individual issue in The Store

Jerry loses his job, abruptly goes to fight a forest fire, wife Jeanette reacts angrily by having a fling while son Joe helplessly looks on.
Editor Rating ★★★★★4.5 out of 5
More Details