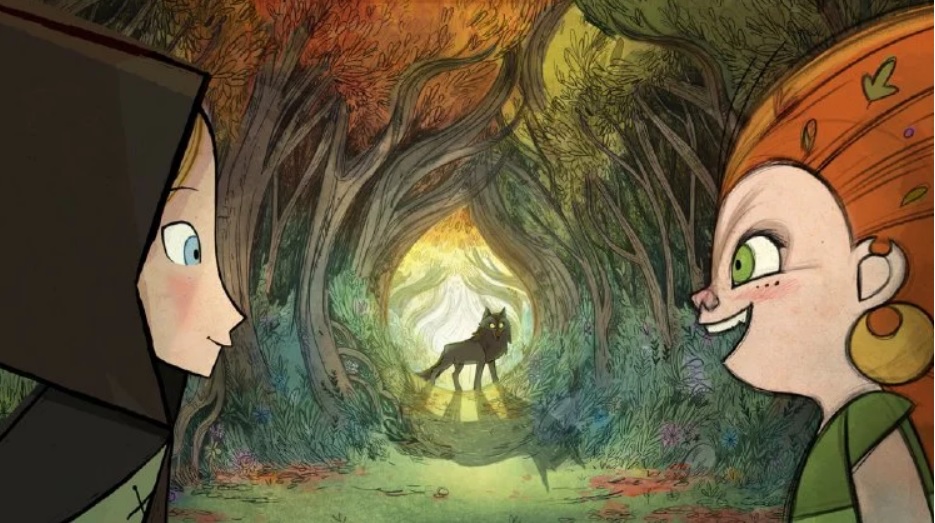 Irish filmmaker Tomm Moore rounds out his colorful mythical trilogy of animated films by reversing the negative image of wolves in “Little Red Riding Hood.” And what a glowing film this is, rising to the level of his magical The Secret of Kells (2009) and Song of the Sea (2014). Adults will love the film for its intricate animation, its attack on fanatic prejudice and cruel colonialism; and children will thrill to its exciting story headlined by a spunky young daughter—feminism without any preaching.

Set in the troubled Ireland of 1650 when England has invaded and defeated Irish rebels, the script by Will Collins  includes a revised history of the English conqueror Oliver Cromwell, designated in the film as The Lord Protector (Simon McBurney). This is history as it ought to have been, similar to the way in which Quinten Tarentino recast World War Two in Inglorious Basterds. The three central characters are the English hunter, Bill Goodfellowe (Sean Bean) and his daughter Robyn (Honor Kneafsey), and the Irish Mebh (rhymes with “Babe,” voiced by Eva Whittaker). Bill is tasked by the Lord Protector with hunting and killing the wolves that threaten the people of Kilkenny, preventing them from cutting down the surrounding forest so they can enlarge their tillable fields. Robyn is supposed to stay home and take care of their house, but instead she dresses in huntsman clothes and, armed with a crossbow, insists on sneaking out and following her father into the woods. Mebh, on the other hand is a forest-dwelling wolfwalker, half human and wolf, who is searching for her lost mother Moll whose sleeping body lies motionless deep in the forest. During the day Mebh is human, a small girl with wild hair, but when she sleeps, she becomes a wolf, running with the pack.

Robyn, even though she is ordered to stay home, keeps trying to follow her father into the forest, accompanied only by her faithful falcon Merlyn. During one of these forbidden excursions beyond the walls of the city, she meets Mebh. The two are hostile at first, but eventually bond, especially after a bite by Mebh transforms Robyn, so that at night she too turns into a wolf. Robyn loves her father, even when he continually sends her to do domestic work, eventually in the communal scullery, but once the girl tries to help her friend find the missing mother, she is faced with the painful choice of going against her father. She pleads with him as he sets forth to carry out the Lord Protectors to exterminate the wolves that there is another way, but the uncomprehending father becomes even more upset with what he sees is a rebellious daughter. What happens when Robyn finds that the mother in wolf form is imprisoned in the Lord Protector’s personal quarters forms the climax of this intriguing story.

The Lord Protector, like his real life counterpart Cromwell, has strong religious beliefs. He sees himself as reforming the semi-pagan Irish by his campaign of exterminating the wolves. The film makes no mention of Cromwell’s horrible massacre of the citizens of the besieged city of Drogheda a year before, but the way he is portrayed, both in the drawings and acting, he seems capable of such cruelty. He often invokes the name of God, following in the bloody footsteps of so many leaders who call out the name of God but are blind to the Deity’s teachings of love. In the town itself we see little evidence of the immense revulsion of Irish Catholics for the usurpers from England, perhaps because this would add confusion to an already complicated story. (Also, perhaps, because the filmmakers want to avoid inflaming the ancient anti-British passions laid aside by 1998’s Belfast Agreement.) The climax of harmony between the two families—Bill and Robyn’s and Moll and Mebh’s—reminded me of the famous Isaiah passage promising peace between wolves and lambs. And the fate of Cromwell seems commensurate with that of those who allow their religion to fuel their intolerance and rage, even though history records that the Lord Protector returned to England and lived almost another decade.

The animation, like that of its two predecessors, is breath-takingly beautiful at times. I love the way mandala-like circles are worked into so many scenes. Although computers were used, the perspective distorting scenes of the town and rooms give the impression of hand-drawn images. Adult viewers also will appreciate that though the natives’ Catholic faith is never mentioned, many of the shots of Mebh and Moll are similar to the thousands of “Madonna and Child” paintings adorning Catholic homes.

Mention should also be made of the gorgeous musical score by composer Bruno Coulais, so appropriate for such a folktale-based story. Deserving of the Oscar for which it has been nominated, this feminist-themed tale of friendship, understanding and reconciliation is not to be missed. Ireland’s Cartoon Saloon proves that it can produce screen magic every bit as enthralling as anything from Pixar!

This review will be in the May issue of VP along with a set of questions for reflection and/or discussion. If you have found reviews on this site helpful, please consider purchasing a subscription or individual issue in The Store

In an Irish forest Robyn befriends Mebh & helps her search for her mother, even tho Robyn is English & Mebh a feared wolfwalker.
Editor Rating ★★★★★5 out of 5
More Details