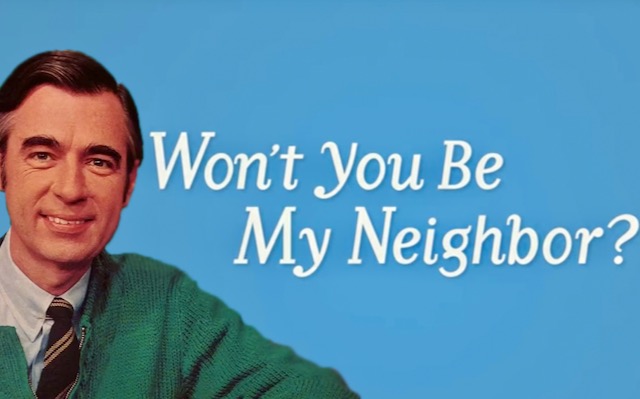 Fred Rogers was the most famous Presbyterian minister in North America before his death in 2003, beloved by millions of children and parents, most of whom did not know that he was a minister. As fellow pastor Rev. George Wirth explains in Oscar-winning director Morgan Neville’s new documentary, Rogers managed to preach Christian values without using the doctrinal language of a sermon. Better than most ministers, and undoubtedly than any other children’s program host, he shared Jesus’ love of and concern for children and understood their needs.

Mr. Neville has lined up a studio-full of interviewees who were close to the man, including his wife of almost 51 years, Joanne Rogers, herself a talented pianist; their two sons Jim and John, and Fred’s sister Elaine Crozier. There is Producer Margy Whitmer; Hedda Sharapan, child development advisor; Joe Negri, “Handyman Negri;” David Newell, “Mr. McFeely” and Publicity Director (he is the one I first met when I visited the studio for an interview with Fred); Francois Clemmons, the black singer cast as “Officer Clemmons;” biographer Max King; journalist Tom Junold, former guest Yo-Yo Ma, and several others. Fred himself speaks through numerous archival clips.

The film opens with Fred at the piano explaining his ministry with children by playing chord modulations, a couple of which he demonstrates–an easy one, and a second more difficult. Referring to the latter, he says that he wants to help children “through some difficult modulations in life.” Influential childhood experts like Dr. Benjamin Spock and psychiatrist Erik Erikson influenced Fred, as well as millions of parents, to be alert to the feelings of children, to take them seriously and not dismiss them lightly. Child psychologist Hedda Sharapan  became a member of his staff—in fact she sought her Masters degree at his advice when she first came to WQED seeking a job right after her college graduation. Thus, Fred combined scientific knowledge of child behavior with his instincts, dealing with their feelings like no one else on TV. These were feelings felt by virtually all children—need for security and of self-worth, fears of going to the doctor or dentist, even of loss and death.

A gifted music student in college, he felt a call to the ministry, but put this on hold after watching the newly arrived TV set at his parents’ home. As he states, TV can be a good method of education, especially for young viewers, but he was appalled at the way it was being used—the director cues shots of people shoving pies in faces and hitting one another and talking down to children. Rogers deplored that this powerful mediumt was being employed primarily to sell products to children—we see two boys watching a war film when suddenly, to their wide-eyed delight, a hand emerges from the set giving the delighted boys the same kind of guns used by the soldiers.

In 1951 Rogers worked at NBC in NYC as a member of the production crew for such programs as Your Hit Parade, The Kate Smith Hour, and The Voice of Firestone. Unmentioned is his role in bringing Gian Carlo Menotti’s opera Amahl and the Night Visitors to the network. As I learned during my first visit with him, this was something of which he was very proud.

He began his work in children’s TV at WQED in Pittsburgh in 1954, the program being The Children’s Corner. With host Josie Carie, he worked behind the camera as producer and puppeteer. During this period, he earned his ministry degree at what became Pittsburgh Theological Seminary and was ordained in 1963, with the mandate to minister to children through television.

He moved right afterward to Toronto to develop the children’s show that became Misterogers. There he was coaxed to come out in front of the camera because of his natural speaking talent. (The film skips over these Canadian years.) In 1966 Rogers gained from CBC the rights to his program and moved back to WQED where he developed what became his 30-minute series we now know as Mr. Roger’s Neighborhood.

Always concerned with the development of children and their feelings, Rogers, who wrote all the scripts and songs, divided his Neighborhood into two sections– the Neighborhood of Make Believe with its puppet characters and his house into which he enters at the beginning of each show and changes into his sweater and sneakers. He did not want to confuse his young viewers, so he separated fantasy from reality by never appearing in the Make-Believe segments. His famous Trolley, traveling back and forth between the two, provided the connection with King Friday and his subjects. He ended his shows by assuring his viewers

Rogers took on seemingly frivolous (to adults) topics, as seen in his song based on a child’s early fear of falling into the toilet and being flushed down the drain, and such serious ones raised by the timid Daniel Tiger’s question following the murder of senator Robert Kennedy, “What is assassination?” Decades later he also dealt with fears in the wake of the destruction of the Twin Towers. In his answers he drew on words his mother had once said to him, “Look for the helpers. You will always find people who are helping.”

Fred’s enormous influence through his dedicated and sincere service to children is beautifully shown in the archival clip from his 1969 testimony before a Congressional committee whose chairman Senator John Pastore supported President Nixon’s intent to cut the $20 million allotted to PBS in the Federal budget. Fred’s testimony was just six minutes long, but so strong that the Senator ended it by telling the witness that he has his $20 million. (Rogers never mentioned this accomplishment to me during the several times that I interviewed him, even though others have lionized him for the achievement.)

The film also deals with the lampoons of his mild manner, he good naturedly accepting them when served up in good will. There is even a clip in which an interviewer gingerly enquires of Roger’s gender, the host replying that he is straight. This is a topic covered by African American singer Francois Clemmons, who was the friendly Officer Clemmons on the show. In a segment in which he and Fred took off their shoes to bathe their feet together in a small pool was deliberately staged at the time when whites were demonstrating against the integration of swimming pools in the South. Neither mentioned the turmoil over interracial swimming, but the camera’s close-ups of their white and brown feet immersed in the water beside each other preached volumes to young viewers.

What Rogers refused to deal with on his program, Clemmons states, was homosexuality. The African American was a closeted gay man back then. When word reached Rogers that he had been seen in a Pittsburgh gay bar, Rogers told him that if he were to go there again, he would be dropped from the show. There is no bitterness in the gay man’s telling of this. He goes on to say that he understood Roger’s concern that the show would lose sponsors and audience were Clemmons’ secret to reach the public. Indeed, he goes on to report that Fred told him at one point that he loved him. Not even my father said that to me, he says, so from that point on he loved Fred Rogers as a true friend who accepted him as he was.

There is so much in this film that religious leaders could have a great time gathering an adult group together to discuss it. I would focus the discussion upon children and our ministry with them (in keeping with Fred Rogers’ approach, I use “with” rather than “to”), using the film as presenting us with a good model for this. I strongly recommend that you read and use Michael G. Long’s fine spiritual biography, PEACEFUL NEIGHBOR: Discovering the Countercultural Mister Rogers. Director Morgan Neville takes a mainly secular approach to his subject, whereas the book, published by our own WJK Press, is written by and for believers who are really into social justice, the author pointing out how, though he was not out-front marching with C-R and anti-War protestors, Fred Roger’ programs and songs subtly dealt with basic issues of justice and love.

Any discussion of this film risks becoming a nostalgic session, with parents and grandparents fondly recalling the time when they and their children almost religiously watched the show. (One of the interesting things I learned from my interviews with Fred Rogers was that their research showed that Mister Rogers’ Neighborhood was very popular on college campuses. Thousands of college students, missing their secure home environment, tuned in to their TV friend who reassured them that they were persons of value.)

You will appreciate Mr. Rogers even more after seeing the film—and I suspect will look forward with anticipation to seeing TriStar’s dramatic film about him scheduled to go into production this fall. It reportedly is based on journalist Tom Junold’s chronicle of his friendship with Rogers during the last 5 years of the Rogers’ life. (This is the journalistic who appears throughout the documentary.) I suspected Fred Rogers would blush, but be pleased, with the news that Tom Hanks has been signed to play the best friend that children ever invited into their homes.  In the meantime, there is this documentary, scheduled for release on June 8.

This review with a set of 14 discussion questions is in the June issue of Visual Parables.

Note: To see an account of my four personal encounters with Fred Rogers go to: