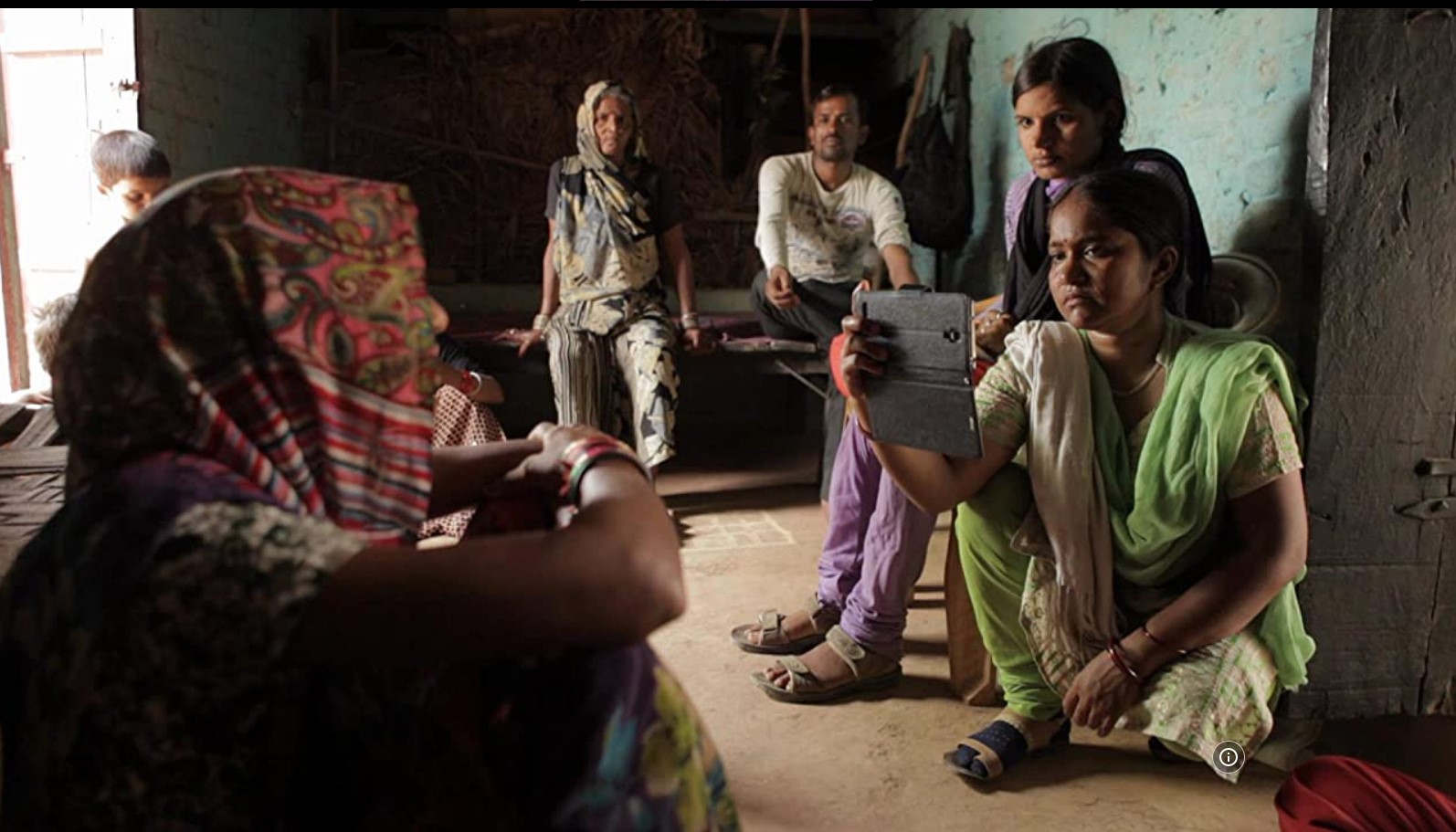 Speak out, judge righteously,
defend the rights of the poor and needy.


learn to do good; seek justice, rescue the oppressed, defend the orphan, plead for the widow.

This Oscar-nominated documentary’s title must have been derived from the white hot passion of journalist Meera Devi and her colleagues at their newspaper located in northern India. Khabar Lahariya, which means in English “Waves of News,” is staffed by Dalit women. We owe a great debt to directors Rintu Thomas and Sushmit Ghosh for their willingness to follow these women on their rounds of reporting for five years in order to bring us their story.

As we quickly learn, despite caste restrictions being outlawed in the Indian Constitution, the caste system established some 1500 years BC, persists. People are divided into four ruling casts—Brahmin (priests & teachers); Kshatriya (rulers and warriors); Vaishya (farmers and artisans); Shudra (tenant farmers and servants); and Untouchables, who took up the name of Dalit. The latter have been relegated to do society’s “unclean” work, such as sweeping streets, tanning hides and dealing with dead animals, and killing pests. The word Dalit means broken, crushed, or downtrodden. Despite Gandhi’s popularity, his long campaign to raise them up, that included calling them “Children of God,” was not successful. In this documentary it is from this group that the main character, Meera Devi, has arisen. As this film begins the 32-year-old journalist has been working for the newspaper for over a decade. Being a senior reporter she has been assigned to train a fresh batch of journalists as the paper transitions over to digital reporting. Along the way two other reporters come to our attention, cub reporter Shyamkali and 20-year-old Suneeta.

The group of women Meera addresses are apprehensive because none of them have ever used a cellphone before. When the packet of phones arrives, we see how happy Meera is as she unpacks and distributes them, and then proceeds to show them how to use them. This begins with her pointing to a TV monitor and explaining that because of the shape of TVs, they must shoot their videos in horizontal mode.

Khabar Lahariya has been effective as a print medium at speaking out “for those who cannot speak,” and this effectiveness grows as, from its YouTube platform, it reaches a growing number of people. The women face opposition, as we see when one of them faces a crowd of skeptical men who order her to leave. She explains that she is a reporter with the job of telling their story. As we witness their hostility it becomes apparent that without the presence of the documentarians and their camera, she might have been in great danger. She bravely refuses to back down, handling the situation with amazing tact and skill. Later on a reporter covering a story is scolded by the male journalists, telling her she must praise such an interviewee, but she steadfastly refuses, replying that they have offered enough praise.

Uttar Pradesh, located in northern India, is currently ruled by the Hindu party of PM Modi, so with that party’s intense anti-woman philosophy, it is a dangerous place for rep for those who cannot speakers who question their power and actions—and even more so for low-caste female journalists. But, as Meera Devi says several times, the role of journalists is to bring out all the facts, because only them can a democracy flourish. Thus, unknowingly she has allied herself with the author of Proverbs and of the Hebrew prophets in their concern for the welfare of the afflicted and oppressed. We see reporters daring to confront a police official when his colleague had refused to accept a complaint of a raped woman. In another scene as Shyamkali interviews the father of a raped daughter, the old man covers his eyes as he weeps.

The women are clever, as well as dedicated and courageous. Not all of them have access to electricity, and so when three meet before covering a difficult interview, one of them points out that she has very little power left in her phone because of lack of electricity in her home. The leader tells them that they will all use their phones during the interview and afterwards she will edit them into a coherent whole.

Despite the attempts of the authorities to ignore them or to push back, the women manage to bring small increments of change to their region. A remote village connects to the electrical grid; an ignored community receives badly needed medicine; an important muddy road is finally paved; and a canal is constructed for dry farmland — all after stories about them ran in the digitalized Khabar Lahariya.

The women develop into quite a sisterhood, as we see when they go on retreat high up in the mountains of Kashmir where they receive more training and also frolic in the snow. Later on Meera is saddened to report that one of her best journalists, Suneena, is dropping out. The young woman herself explains her situation, of how it is impossible for a woman to remain single in her society. She has decided to give in to family pressure because of the shame her holding out would bring them in their neighborhood. This will turn out better, however, than expected.

Perhaps the most disturbing aspects of life in Uttar Pradesh is seen in the interviews with candidates of the Bharatiya Janita Party (BJP), the nationalist Hindu party headed by PM Narendra Modi. An older candidate obviously does not respect the female reporter as she tries to get past the generalities of his statement. In another interview with a youth leader the man brandishing a sword is downright chilling. The leader’s program centers on the protection of cows, and when the reporter tries to get him to explain how that will benefit the people, his reply is less than satisfactory. Given the ascendancy of the BJP in Uttar Pradesh and elsewhere in India, we see how important this newspaper and its intrepid journalists is advocating the rights of all people, men and women.

Spread out over a period of five years, this fruit of the labors of directors Rintu Thomas and Sushmit Ghosh is both inspiring and also a reminder of the importance of a free and courageous press. Virtually everywhere in the present day world oppressive forces have arisen, and thus must be resisted if democracy is to survive. Among the resisters, journalists like Meera Devi are in the forefront, challenging the powerful to ” learn to do good; seek justice, rescue the oppressed, defend the orphan, plead for the widow.” And in India especially, to add “the raped” to the oppressed, the orphan, and the widow.” At risk to their own well being Meera, Shyamkali, Suneeta, and their colleagues carry on the struggle. They will never win a Pulitzer or Nobel Prize for their courageous work, but let us hope that millions will see and be inspired by their bearing witness to the plight of the needy in their country.

Watch this Independent Lens Film on PBS on March 28, and for the following 30 days on its website.

Dalit female journalists staffing a newspaper in northern India are often the only ones brave enough to advocate the rights of raped women & seek improved conditions for villagers.
Editor Rating ★★★★★5 out of 5
More Details