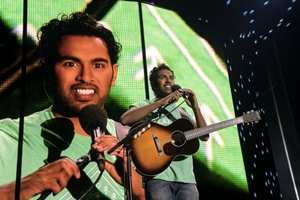 For I know my transgressions,    and my sin is always before me.

The way of the guilty is devious,    but the conduct of the innocent is upright.

John Lennon invited us to imagine a world without war and other downers. Director Danny Boyle and scriptwriter Richard Curtis invite us to imagine a world without the Beatles. A real stretch! But that is what happens when hapless would-be rock musician Jack Malik (Himesh Patel) suffers a traffic accident at the same moment that some kind of a cosmic force disrupts the world’s power grids briefly. Besides good music, the film deals with a man’s struggle with his conscience, making this a good film for groups to explore. Of course, there is also a story of unrequited love to heighten our interest.

Jack has been supporting himself by working in a warehouse, but his first love has been music. He is good enough accompanying himself on his guitar to have attracted the lovely Ellie (Lily James) who serves as his manager, roadie and cheerleader, but that is all, except for a few friends. When she gets him included in a music festival, he draws just a tiny audience of a few children and his loyal friends. By the night of the strange event Jack has decided to give up his attempt at a music career. From Ellie’s reaction we can see that her interest in him is more than professional—and true to the genre, Jack is blind to this. Ever since their school days when he sang in a teen band, she has carried a torch for him.

When Jack wakes up in the hospital, Ellie is there helping him to eat. He jokingly asks her “Will you still feed me when I’m 64?” and she doesn’t understand what he is referencing. “Why 64?” she asks, to his surprise. He is astounded later when, sitting with his friends, he sings some lines from “Yesterday” and they fail to recognize it. “When did you write that?” Ellie asks. They all think it is a good song but claim to know nothing of the Beatles. Jack Googles “Beatles,” and up pops numerous pictures and articles about the insects. He searches through his large record collection, and his favorite albums in the B section are missing.

After he makes recordings of several of the Fab Four’s songs and they are played on the radio he picks up a following. Real life singer Ed Sheeran, playing himself visits Jack to invite him to join his tour as the opening act. Before long Jack has beaten him in a song writing contest, Sheeran declaring, “I was always told someone would come along and be better than me. You’re Mozart and I’m Salieri.”

Thanks to TV and the Internet, Jack draws attention from America in the person of Debra (Kate McKinnon), the head of a major record L.A. company. Jack is now playing to huge audiences of adoring fans, but now in L.A. is in danger of accepting Debra’s money-centered values. The record exec is well aware that she and her stable have sold their souls, telling Jack that she offers “the poisoned chalice” of fame. In addition to losing his soul, Jack is in danger of losing Ellie. Plus, he is bothered that his success is based on a lie. What to do?

In addition to the amusing reactions from his friends who do not recognize the songs is the scene in which Jack is trying to play “Let It Be” for his parents (Sanjeev Bhaskar and Meera Syal), who have never understood his passion for music. He barely gets out the first haunting line when his father is distracted. Jack tries again and again, with his uncle’s joining the three being the final disruption. All three are oblivious to the beauty of the music. Funny, but sad. The other funny scene you probably have seen on the trailer is when a studio engineer insists, despite Jack’s objections. that John Lennon’s song be “Hey, Dude.” Also, as part of the script’s lampooning the record industry, an exec rejects the album title “Sgt. Pepper’s Lonely-Hearts Club Band” because it has “too many words” and also “The White Album” because it has “serious diversity issues.”

Several reviewers have pointed out that the film dodges the wide effect that the Beatles had on so many other performers and yet the depiction of the entertainment industry in the film glosses over this. Having seen the documentary In Echo Canyon, which shows how Americans such as Bob Dylan, the Byrds, and a host of others were impacted by the Beatles, and vice versa, I can understand this. However, Boyle and Curtis probably would have said that would have required more screen time and complexity than they wanted to go into. They are producing entertainment and not a philosophical exploration of the ramification of a Beatleless world.

The section in which Jack’s wrestles with his conscience probably should have been extended, but nonetheless it is still resolved in a satisfying way. Like Fred Rogers he is surrounded by children, his true calling apparently being teaching music. Jack not only discovers love (at last), but also that a life impacting child is far more fulfilling than one of world-wide fame. I think Mister Rogers would have liked the last scenes of the film. And so, should all those who love to hear, even in a new pared-down form, the exquisite songs from the

Jack Malik is the only one who remembers the Beatles, so by singing their songs he becomes famous, though in danger of losing his soul due to his deception.
Editor Rating ★★★★★4.5 out of 5
More Details