The one who begets a fool gets trouble;
the parent of a fool has no joy.
Proverbs 17:21
When I was a child, I spoke like a child, I thought like a child, I reasoned like a child;
when I became an adult, I put an end to childish ways.
1 Cor. 13:11 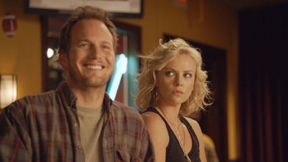 Charlize Theron’s Mavis Gary is neither young nor adult in this character study of a pushing-forty divorcee whose life is as messy as her Minneapolis apartment. Since leaving her hometown of Mercury, Minnesota she has become a juvenile fiction writer though the books have not provided her the high profile fame she would like. She is the ghostwriter of a series created by another author, and it becomes clear when we see the books on a “remaindered table” that no one is buying them any more. The book she is struggling to finish probably will be her last in the series. With dismal prospects of searching for a new job plus her failed marriage causing her to live alone, Mavis turns too often to alcohol for escape.

When she learns that her former high school boyfriend Buddy (Patrick Wilson) has become a new father, she decides to return to Mercury to see him again. However, we soon understand that it is not just to renew old acquaintances. She intends to steal him away from his wife Beth (Elizabeth Reaser). She is so self assured and glamorous looking that she is certain that it will be no contest between the two of them in capturing Buddy’s heart. Is she ever in for a surprise!

Charlize Theron’s task is a difficult one–to win our interest, if not our sympathy, as she plays a unlikable character. Mavis is selfish and petulant, used to having her own way all of her life, hence my choice of the above Proverbs passage. And yet there are moments when we see how vulnerable and in need of love she is.
Fortunately there is a character close at hand with whom she spends far more time than Buddy. This is Matt (Patton Oswalt), an overweight nerd whom she at first cannot remember, even though he had the locker right next to hers. Of course, she was the beauty queen, and he was a nobody. They meet in the bar where Mavis has come to drink alone. Matt reminds her that she used to call him “the theater fag,“ even though the gossip about his being gay was not true. Some of the jocks had ganged up on him during his a junior year, their hate crime injuring him so severely that he can get about only with the aid of a cane, and worse, he is sexually impaired. Buddy is so involved with his family that he can spend very little time with her, so Mavis looks upon Matt as her drinking partner. Soon he becomes her confidant.

There is a beautiful moment when Mavis comes to Matt’s home completely crushed and he embraces her. They fall into bed, and for once sex is not a matter of lust or exploitation, but of mutual grace, each giving and receiving what they need at the moment. Of course, this scene might make it a hard sell for a church group to watch and discuss. So too might be the revelation of what Mavis went through when she and Buddy were dating, creating a situation of sorrow and grief, the impact of which explains part of the reason for her stunted growth.

As a study of a woman who has never caught onto what the Apostle Paul wrote to the Corinthians, Young Adult is an excellent film, which should not be surprising in that its director Jason Reitman and screenplay writer Diablo Cody are the pair that brought us the insightful teen drama/comedy Juno. Their Mavis is typical of so many in our culture that thinks beauty is a matter of physical appearance rather than of the heart. Mavis has to learn the hard way that real beauty is not a matter of changing one’s face by applying new make-up, but rather a matter of changing the heart from self-concern to other concern. At Buddy and Beth’s baby naming party we see that the ordinary-looking Beth is the beautiful person. After what happens there to Mavis we can only hope that she eventually she will also discover this. Though billed as a comedy, there is a serious and dark side to the proceedings.

A version of this review with discussion questions will soon be available at visualparables.net.