This week, Americans are remembering an inspiring moment that happened 75 years ago in New York City, when a man stricken with a disorder that eventually would kill him declared himself, “The Luckiest Man on the Face of the Earth.” As I am publishing this column, fresh news stories about this anniversary are popping up in newspapers nationwide—from the Wall Street Journal to Newsday. Once rivals, on July 4, 1939, Babe Ruth enthusiastically hugged Lou Gehrig, who had announced he was dying and at the same time declared himself “The Luckiest Man.”

The man who made that declaration was Lou Gehrig, “The Iron Horse”—first baseman for the Yankees in the 1920s and 1930s, when baseball was by far the most popular sport in America. He earned his nickname for the strength and endurance he showed throughout his career. Gehrig played 2,130 games in a row from 1925 to 1939. He had a .340 career batting average with 493 home runs. He drove in more than 100 runs in 13 consecutive seasons.

In 1939, at age 36, everything changed for Lou Gehrig. In the spring he lacked energy, looked thinner and less confident at first base and in the batter’s box. His performance was so poor that he removed himself from the Yankee lineup. He went to the Mayo Clinic in Minnesota where he was diagnosed with amyotropic lateral sclerosis, or ALS, the rare, debilitating disease that attacks the body’s nervous system. It was eventually called Lou Gehrig’s disease. So Gehrig, one of our country’s most revered sportsmen, knew he would become more and more helpless.

That summer, Gehrig agreed to go public with his diagnosis. His fans clamored for a way to show their love for him. That groundswell led to the July 4, 1939, Lou Gehrig Appreciation Day and a special program between the first and second games of a double header. Gehrig was surrounded by his Yankee teammates, including his former rival Babe Ruth. They were joined by their friends once known as “Murderers’ Row”—for the ruthless power that Yankees lineup showed in the 1927 World Series. The festivities included the retirement of Gehrig’s Number 4.

When Gehrig himself stood before the microphones, he began:

“Fans, for the past two weeks you have been reading about the bad break I got. Yet today I consider myself the luckiest man on the face of the earth. I have been in ballparks for seventeen years and have never received anything but kindness and encouragement from you fans.”

Gehrig turned to thank his many friends in baseball, concluding: “Look at these grand men. Which of you wouldn’t consider it the highlight of his career just to associate with them for even one day? Sure, I’m lucky.”

But then Gehrig did something unusual. He talked about his family—the people who would become his circle of caregivers. He started by poking fun at his wife and mother-in-law: “When you have a wonderful mother-in-law who takes sides with you in squabbles with her own daughter—that’s something. When you have a father and a mother who work all their lives so that you can have an education and build your body—it’s a blessing. When you have a wife who has been a tower of strength and shown more courage than you dreamed existed—that’s the finest I know.”

He ended his brief talk this way: “I might have been given a bad break, but I’ve got an awful lot to live for. Thank you.”

The crowd applauded for two minutes!

Many friends rushed to offer Gehrig new roles that this great star might fill in his waning years. The only one Gehrig accepted was an appointment by New York Mayor Fiorello LaGuardia to serve in a special post granting parole to some of the city’s more deserving prisoners. Gehrig refused to allow any media coverage of his work, in this role, but he did pay many visits to correctional facilities to help prisoners who might deserve paroles.

He never complained. “Don’t think I am depressed or pessimistic about my condition,” he said at one point.

Then, just shy of two years after his Appreciation Day, on June 2, 1941, Gehrig was gone.

WHAT CAN WE LEARN FROM ‘THE LUCKIEST MAN’? 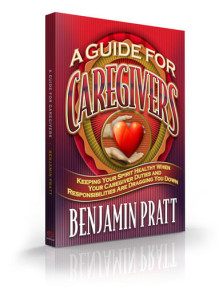 No, none of us is Lou Gehrig. No one could be. But consider this …

When I was interviewing for my book, Guide For Caregivers, I constantly heard from caregivers about the remarkable people they were serving—and about the sense of purpose and courage they shared in facing tough odds. Many caregivers across our nation understand the kind of attitude Lou Gehrig expressed 75 years ago.

One of the most moving statements I heard, in my research, was from the father of his disabled son, who came home wounded from his military service. Here are just a few of that father’s words to me:

“Since my son got wounded I have often thought how I wish we could get our life back—you know, as it was—comfortable, simple, and familiar. And, I often felt angry or jealous, as well as guilty, for thinking I wanted my life back. …

“But, the unexpected just happens to us and we are coping. We are on the front line—in the trenches—all day—every day. This is our life … and our lives have to be lived as best we can. Our son was doing his job when that damn bomb went off. None of us will ever get back to the life we had.

“One thing feels pretty strange to me now—I’ve never felt more like I have a reason to stay alive than I do now.”

No, this proud father never called himself the world’s “luckiest man.” But I do know that he is deeply grateful and his life is full of purpose.