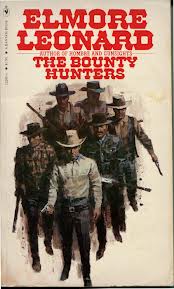 Elmore Leonard lived around the corner.

Every so often I would see him out and about, at Kroger, driving through the neighborhood in his little green car, a years-old Jetta or some other unassuming non-flashy model. One time, before HIPAA, I signed my name beneath his at our corner drug store, attesting that yes, I had been informed of blah blah blah. His was the autograph; mine, the signature. I never waved when our paths crossed. In the way veteran Manhattanites channel nonchalance when spotting a celebrity at Zabar’s or hailing a cab, I too, tried to give our hometown star his own space. I thought of him sometimes, writing in the house nearby. Were his characters behaving? Taking him down unanticipated alleyways? Did he ever get frustrated, want to forget all about this writing thing?

When he died, the neighborhood was a little dimmer, a little sadder. Did the walls of his upstairs study miss the sound of his pen scratching against the lines of a legal pad? The clatter of the typewriter that followed those initial handwritten drafts? The house went up for sale and my husband and I ogled the real estate sheets.  The grounds looked beautiful, the rooms elegant, bookshelves abounded.

Last week there was an estate sale. The streets, already narrowed by mountains of snow, grew narrower as cars lined the curb, their drivers walking eagerly toward the house. Of course my husband and I walked over. We have neither room nor use for additional furniture; but who could pass up the chance to peek inside Elmore Leonard’s home?

His son Bill was at the door greeting all comers with a cheery smile and a gentle request to put shoe-covers over our snow-packed boots. He graciously accepted accolades, traded stories with more than a few folks.  While the purpose of the gathering was a sale of his father’s belongings, it also had the feel of a wake or a shiva house as voices rang with laughter at shared memories and oft-told stories were retold just once more. 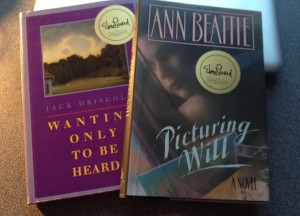 I ambled toward a sitting room/library.  Floor to ceiling bookshelves flanked a generous doorway. His hands had pulled these novels from the shelves; returned them. What had he thought of the Didion? There was one by Bill Vlasic, another local writer whose byline runs in the NYTimes. They likely had commiserated over the turns taken by the auto industry. Drawn by its title, I reached for a short story collection: Wanting Only to be Heard. I sometimes think that’s why I became a writer.  What had Leonard thought of Ann Beattie’s Picturing Will?  I nabbed that, too. 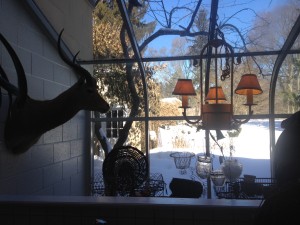 The rooms were comfortable but not overly grand. The furnishings, beautiful.  A glass sunroom had been added to the kitchen, overlooking an acre of backyard. Had Leonard moseyed down for a cup of coffee when the writing wasn’t going well? What did he think as he looked out over the lawn, steaming cup warming his aging yet still-nimble fingers? People looked over dinner plates and Val St. Lambert crystal candlesticks. They debated buying packets of everyday silverware taped into neat bundles of 12. What would it be like to eat with Elmore’s fork? A fork’s just a fork. For all his fame he was still just a person — ate like the rest of us. His food, post digestion, didn’t go anywhere more special than yours or mine, either.

It was a strange few moments in the home of this great author. I thought as I so often do, of what we leave behind. We spend a lifetime collecting, sealing memories into the stuff we lovingly place around us, arrange on skirted tables and on shelves that gather dust in the creases of our mementoes. We leave behind letters, conversations, loving gestures and way too often careless comments and pain. A piece of him could be had for a few dollars or several hundred. Or for nothing, just by heading over to the local library’s fiction section. And then there was the part of him that even a king’s ransom couldn’t buy — the talent that was his alone. The determination to craft one perfect sentence after another, characters so vibrant they reached from the page and slapped you silly, dialogue so spot-on that no one could touch him.

“The good stuff is going to DuMouchelles,” I heard someone say, referring to Detriot’s fine arts auction house. No, I thought, the good stuff can’t be sold. Ever. Famous or not, your good stuff is the stuff no one can buy, the stuff you can share only by giving it away: love, kindness, laughter; dedication, honesty, hugs; compassion, patience. If you’re conscientious and careful, the good stuff you leave behind will be so plentiful that even a mile of bookshelves won’t be able to hold it all.

Books in hand, I walked down Elmore’s driveway for the first and last time. Sooner or later new owners will be moving in. I sure hope they’re creative, another writer perhaps or an artist or a musician. Be a pity to waste all that great energy still flowing through the rooms of the house that belonged to one of the greatest of the greats.