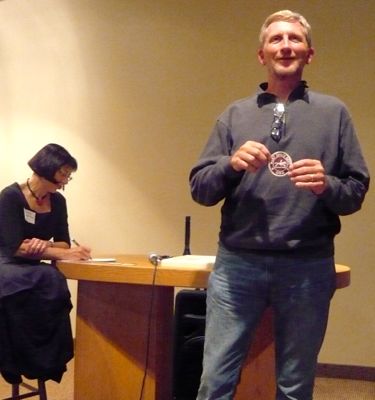 BOB CRAIK, a proud son, shows his father’s official patch from the Post Office as I take notes on the stories we are hearing at Northville.

A week or so ago I had the pleasure of participating in a program at the Northville First United Methodist Church sponsored by the Read The Spirit team. As regular readers of this site know, David Crumm is my publisher and one of the creators of Read The Spirit online magazine, which is devoted to all matters of faith, religion, spirit and soulful kiruv (pronounced kee-roov, it is one of those untranslatable Hebrew words that means the act of bringing folks together.)

The evening was the last in a four-part study group the topic of which was shared American values. The book anchoring the group’s study is Dr. Wayne Baker’s United America, which will be released nationally on January 1. The somewhat cumbersome but totally descriptive subtitle—The Surprising Truth About American Values, American Identity, and the 10 Beliefs That a Large Majority of Americans Hold Dear—gives you a context for the weekly discussions.

The overall goal, through Wayne Baker’s ongoing work and his new book, is to engage in civil dialogue and exploration of the many shared values and perspectives that remain between and among us.

That’s true. Still. Despite the media’s color-war distillation of our citizens into red or blue camps. Despite Congress’ appalling lack of cohesive efforts for the greater good. Despite the myriad of issues that we allow to set us apart instead of acknowledging what unites us. As Wayne’s research at the University of Michigan has shown, we still have core values that vast majorities of us hold.

As part of the United America pre-publication roll out, the Northville group was involved in four evenings of workshop experiences that might accompany a “group read” of the new book. The evening that I visited the Northville series was given over to the kind of heartfelt sharing I haven’t experienced since I was in kindergarten.

Participants had been asked to bring a memento from home that reflected a value they held dear. One man brought in the patch that had been sewed to his father’s work uniform. His father was a postal worker, “at a time when being a postal worker was a true profession.” Holding the patch aloft, he recalled a man who never missed a day of work, who never complained, who embarked upon his 92-mile route in rural Minnesota through snow, blizzards and all the rest. He was a bit shy in his sharing this palm-sized embroidered badge, but I know I wasn’t alone in my admiration for this man, long-gone, but whose example to his son remains as shiny as the brass buttons on his gray wool uniform.

Someone else brought in coins from the 1850’s, and through them gave us a history lesson. There were no presidents on coins at the time, but instead images of Lady Liberty, the American bald eagle, a shield, laurel branches. There were no mottoes on coins until 1865, when the Civil War was winding down. The country was reeling from the self-inflicted devastation, and this is when the phrase In God We Trust made its first appearance—on a two-cent coin. “There is a shield on the coin’s flip side,” Mark said. “The North wanted to make a statement—that we trust in Providence. Not Presidents. Not other humans. It was a statement that Americans were united by a force outside of human representation.” 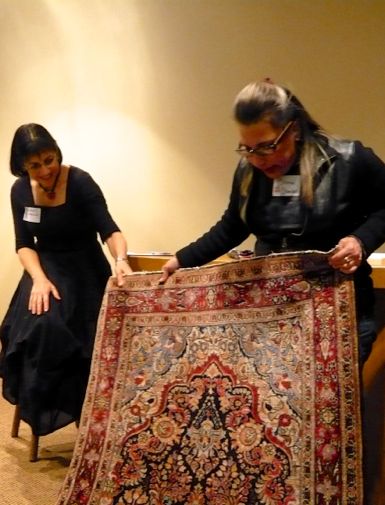 CHRISTINE CHAMBERS and I look at her beautiful Persian rug as we hear her moving family story about its legacy.

Others who stood before the group shared beloved items, including wartime love letters—and a beautiful prayer rug from Persia (today’s Iran). That rug, and others, had been been brought to America by the family patriarch, a Methodist missionary who got his young family out of harm’s way at a time when local Muslims were bent on cleaning house of all the country’s Christians. “This rug reminds me of love and respect,” said his great granddaughter. “And the courage to take action in the face of danger.”

One woman brought a 5-inch-thick binder containing the genealogical record of her Norwegian forebears dating all the way back to—are you ready? 1250. Her pride was tempered with a bit of anxiety over whom would one day receive this precious legacy.

Because that’s the whole point of it all—the sharing and the passing down of what we value. We may pass along the heirlooms and mementos that are dear but more importantly, we pass down what we hold dear: honor, perseverance, duty, love, kindness, concern for those less fortunate. The passing along of our values may be the most important show and tell of all—showing our loved ones, through our actions, precisely what we value. And telling them—with patches, rugs, letters and coins—where they came from and what we pray they take with them as they go forward.

And here’s a great essay about a grandfather’s transistor radio and the prominence it played during Hurricane Sandy last year.

Care to read more about Wayne’s work with values? Check out his department within Read The Spirit, called Our Values.

2 thoughts on “Show and Tell is for Grownups, Too!”