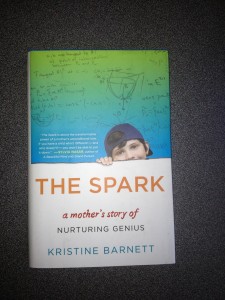 Don’t know what made me pick up Kristin Barnett’s memoir The Spark: a mother’s story of nurturing genius. Maybe it was her son’s cute face peeping over the title a la the old Kilroy-way-here grafitti.  Or maybe it was just the first few sentences of the blurb describing Jacob’s IQ — higher than Einstein’s, his photographic memory and the tidbit that he taught himself calculus in two weeks.

But none of that is really it. The Spark is the story of an ordinary/extraordinary mom whose son was diagnosed with autism and who was determined bring her kid out of its grip.  She bucked the entire educational system, took matters into her own hands and worked like crazy to open the door back to her beloved child.  Along the way she discovered, holy moly, that the boy who teachers said would never read was in fact a genius who very well receive a Nobel Prize one day for his discoveries in astrophysics.

This is a mom on a mission. A woman who left the Amish community of her childhood to marry the man who was her soulmate.  A woman who ran a daycare center on a shoestring and a boot-ful of ingenuity.  A woman who cut ties with the experts, created her own curriculum that honored her son’s interests — string, clouds, stars — instead of focussing hours on end upon his deficits. She’s a woman who saw the sparks emanating from her silent child and fanned them with love, determination and faith.

Along the way, Kristine Barnett created a class, and ultimately and entire youth program, for kids like Jacob whose parents were also seeking an alternative to therapies that focussed on deficits instead of building on strengths.  She never gave up.  Not through economic disaster, the birth of a second son whose physical challenges would have leveled any one of us, nor health crises of her own.

Chapter by chapter you can’t help but root for this young boy whose math skills are off the charts, and whose Ted talk, “Forget What You Know” is marvelous.  The Spark is an uplifting read about a powerhouse of woman whose message resonates for parents of children of any age: trust your gut, buck the system if you have to, call in experts you trust, and always remember to take time out to play.