And not because I like pumpkin pie. And definitely not because fall is waning and we begin the unavoidable trek into winter. No. The eleventh month is high on my list because November is Jewish Book Month, celebrated with a book lover’s equivalent to a ninth inning grand slam — Jewish Book Fairs.

You don’t have to be Jewish to love and attend Jewish Book Fairs. You just have to love books. Like them even. Each November, Jewish Community Centers across the country host authors galore who come to speak about their latest books. There are luncheons, Q&A’s with the authors, there are books to peruse and book lovers to chat up. There are books to buy (natch) and have autographed. What makes it Jewish? Author or subject matter. Or both. What makes it wonderful? All those books. All that energy. All those people who thrill at the written word and the authors eager to share their latest work.

Book history fact: Detroit is the birthplace of the auto industry, Vernor’s, Saunder’s fudge and my two beloved children. It’s also the birthplace of the very first Jewish Book Fair. Begun right here more than fifty years ago by Irwin Shaw, of blessed memory, Jewish Book Fairs are one reason publishers are willing to take a chance on so many books of Jewish interest. They know there is a readership and built-in promotional structure.

Now organized nationwide by Carolyn Hessel and her great folks at the  Jewish Book Council, every major and not-so-major US city has a Jewish Book Fair (or Festival) in November. Check it out. Call your local JCC. Bring a friend or two. Or three or four.

So wherever you live, and whatever you love to read, attend your local community’s Jewish Book Fair. November will never be the same. 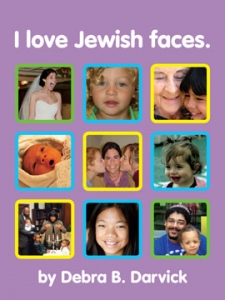 After six years, three editors, rewrites, more hours of photo research than I ever dreamed possible, and a hefty yet worthy debate over the implications of using the word Shabbos, Shabbat or Sabbath, my children’s book — I Love Jewish Faces — has been published!  Two slim copies arrived via plain old USPS but it felt as if they’d been delivered by six white horses drawing a glass carriage.

Holding one’s book for the first time is akin to holding one’s newborn, minus the crazy breathing and the episiotomy. Nothing matches those first few minutes when you savor the text, reading words pulled eons ago from your brain, heart and gut, alive now on the pages — pages beautifully illustrated by someone who understood how to take your vision and make it real.

You are grateful beyond belief — grateful for that moment of inspiration, grateful for the friends and family who listened to you go on and on and still encouraged you, grateful for the editor who believed in you and your story and said when he met you that he couldn’t wait to read your book to his son.

And what is the story of I Love Jewish Faces? What are these ninety-four words and thirty photos about?  Two words — Jewish diversity. The Jewish faces in this book are peach and white; they are light brown and dark brown; they come from places as near as New York and as far away as Tunisia. They are brunette and blonde, old and young, brown-eyed, blue-eyed and almond eyed.

I cannot say I set out to write this book out of a burning desire to broadcast a message of Jewish diversity.  I can say that when the idea of it nudged me, I knew its message had to get out there — kids adopted from other countries need to see themselves and their families in their Jewish books.  The Jewish community needs reminding, too, that Jews come from all “races and places.”

I will be speaking at the Detroit Jewish Book Fair on November 8, in Ann Arbor and at the New Haven Jewish Center in Woodbridge, CT on Nov. 3. Bring your children and grandchildren. Or borrow one for the afternoon. You can read an excerpt from the book by clicking here. Enjoy!

To hear the women tell it, Joseph Licht, the protagonist in Evan Fallenberg’s first novel, Light Fell, is neither sympathetic nor likable. In fact, during the Q&A one of last night’s attendees put it pretty bluntly, “I didn’t like any of the characters in this book.”

Fallenberg, who is not only likable and sympathetic but was a terrific and engaging speaker (not to mention cute as all hell), stepped back from the podium, took a swig of water and laughed.

“Wow. People have told me they don’t like Joseph. But no one’s ever said they don’t like anybody in my book. Let me think about this for a moment.” Earlier in the evening I’d answered a friend who had the same reaction to Joseph. Perhaps Fallenberg wanted the challenge of humanizing an unlikable character. Or perhaps he wanted to try on being an SOB.

Acknowledging the reader’s antipathy, the author said he set out to take people and put them in an impossible position. “I wanted to create a situation… you may not like him but can you sympathize with his predicament?” The predicament? Israeli scholar Joseph Licht leaves behind his entire life — wife, five young children, the religious farming community where he grew up — when he falls in love and has an affair with a man, a famous rabbi no less. Now that’s a predicament. Which, inadvertantly or not, extends to some of Fallenberg’s readers who found themselves enjoying his novel while disliking the driving character.

Opening the folds of his writer’s cape, Fallenberg discussed the ins and outs of writing his first novel. A translator by profession, he was so overwhelmed by the idea of creating a novel that when he sat down each morning (4:30 – 6:00) he would tell himself, “Just write a scene Evan, just a scene.” Once the morning’s scene was done, he’d jot down a sentence or two of what came next, a lifeline of sorts. When 4:30 am rolled around again, he had something to grasp as he made his way.

Fallenberg discussed character development, which included giving one the birthday of February 22, 1922. He then visited an astrologer to learn what a person with a birthday of 2/22/22 would be like. “It was as if the [astrologer] knew my character.” He wrote them letters, talked to them until they became fully formed individuals, completely independent of the author. “I spent so much time with them,” he recalled, “that I could trust myself to run with them when they surprised me.” How often does a writer get that nuts and boltsy with an audience? One more reason why I live for Jewish Book Month.

I mentioned translating above, the work that puts pita and hummus on Fallenberg’s dinner table. He’s the man behind the exquisite translation of Meir Shalev’s

A Pigeon and Boy for which he received a PEN Translation Prize for 2007. It’s a prize well deserved. I never could have tackled it in the original and the book is pure magic.

So that’s about it for Evan Fallenberg. Look for more on Sunday. Until then…Happy Reading.