I had no idea what I would write about Tisha B’Av (the ninth of the Hebrew month of Av) when my publisher suggested that I write a column as we near the annual observance. He planned to excerpt on the Read the Spirit website the Tisha B’Av story from my book This Jewish Life, and wanted to refer RTS readers to a personal reflection from yours truly, the book’s author.

Tisha B’Av, a Jewish day of mourning that falls during the summer, marks the destruction of both the First and Second Temples in Jerusalem. This year it begins Monday evening, July 15, and concludes sunset on Tuesday, July 16. I have attended services sporadically, more out of a sense of responsibility than any feeling of true mourning. How do I mourn something absent from Jewish experience for nearly two millennia? The Book of Lamentations, the text read during Tisha B’Av services, is difficult for me to access. I cannot summon the suffering demanded by the text, by the day itself, by the loss of the Holy Temples where early Jews, through their sacrifices, drew close to God. Not much there for a column. 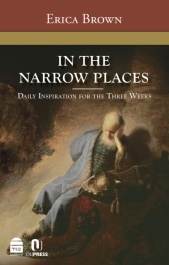 But God has a wonderful sense of humor, not to mention perfect timing. First thing I saw when I walked into Shabbat afternoon services was a small book by educator Erica Brown, In the Narrow Places: Daily Inspiration for the Three Weeks

In the Narrow Places offers a richly accessible perspective on Tisha B’Av, and the entire three-week period leading up to it. Brown addressed my struggle directly when she wrote, “We do not know what it is like to have the Temple as our spiritual focus. We have lost the connection to God, to the altar of forgiveness and thanksgiving that was achievable only within its walls.” About Jewish history she wrote: “[It] is a story of the impossible. Carried within each of us is the touchstone of the impossible when we face despair. We can overcome. We have overcome. When we review our past we reject despair because we can sum it up in one word: Hope.”

The three weeks preceding Tisha B’Av begin on the 17th of Tammuz, the day of the breaching of the walls of Jerusalem in 70 CE (Common Era). It is a day of personal significance because our son’s bris was on the 18th of Tammuz. This year, reading Brown’s words, I imagined myself a new mother at the time of the Roman invasion of Jerusalem. Chaos was pervasive; terror, too; uncertainly, dread, panic. All of it. There I might have been, newly delivered of a beautiful baby boy, besotted with love, beside myself with horror of what lay ahead.

For this mother, the Temple was a reality. She would have brought to the Temple priests sacrificial offerings. Living in the time of the Temple, she shared with fellow Jews a communal experience of God’s presence. Hours after the walls were breached, this ancestor would enter her infant son into the Covenant with Abraham (likely in secret and frantically so). Soldiers would have begun their march on the Temple, intent on its destruction and thus the destruction of all human connection to the God of that Covenant. Would she have been able to reject despair? Holding her son close, how could she not have summoned hope? Hope for him to live. Hope for him to survive the impossible. This ancient woman, and others like her down through the generations, surviving expulsion from England on Tisha B’Av in 1290 CE and from Spain in 1492, again on Tisha B’Av embody the touchstone of the impossible that Brown referred to.

Come next Monday night I will remember Brown’s insight that Jewish history is the story of the impossible. I will mourn the women and their severing from God, the severing from all that was familiar. I will remember that through them I carry that touchstone of the impossible and therefore, after lamenting the destruction of the Temple and recalling generation upon generation of Jewish suffering, I will nevertheless reject despair for hope.

For this observance in 2013, Read the Spirit is publishing online the short chapter from my own book about Tisha B’Av.

And, please, share this column with friends. Use the blue-“f” Facebook icons to “Like” this column or use the envelope-shaped icons to email to a friend.

4 thoughts on “Tisha B’Av: The story of the impossible”