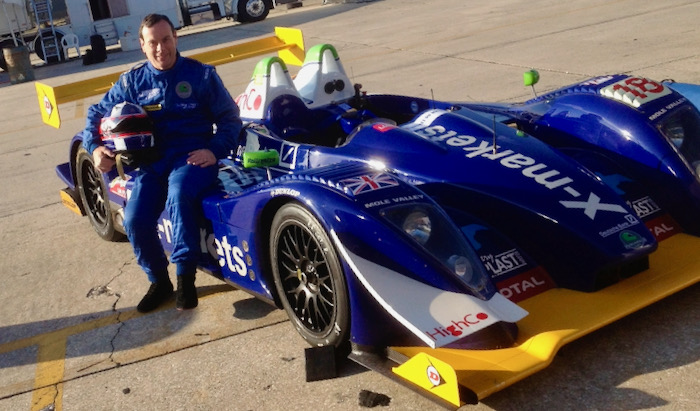 If you’re born in Detroit, you’re born with a reverence for cars.  As the grandniece of Albert Kahn, who designed all the factories for all the car companies in the early 20th C., I have extra reverence.  But I’ve had zero exposure to the world of car racing.

Race car driver David Porter is a new neighbor, fresh from winning classic car races out of more than 250 cars at Daytona and Sebring.  Of course I had to meet him.

David was born in 1955 in Berwick on Tweed, a town that’s been part of Scotland and England over time.  When he was 6, his dad and dad’s friend took him to Charterhall, a racing track on the Scottish border (formerly a Royal Air Force airfield, significant in WWI and II).

“That day I saw my first Formula 3 car,” David says.  “In my mind, I still see it.  It made an indelible impression.”

As David grew older, he and his mom fought over his future.  She was “determined” he’d become a teacher.  David wanted to be a banker like his dad.  Instead of going to college, he joined the British Linen Bank.  In those days, he says, Scottish banks wouldn’t take college grads because they weren’t willing to do the grunt work.  David was.  He served as a clerk and a teller and enjoyed dealing with customers.  But in that pre-computer era, every transaction had to be posted manually in a ledger.  “Staggeringly tedious,” he says.

His boss moved to the Chase Manhattan Bank in 1976.  His boss was “a clean desk guy who managed to be so with people like me doing the work.”  One of the bank’s biggest customers was Glencore, founded by Marc Rich.

Sound familiar?  Marc Rich was an international commodities trader indicted for tax evasion and making deals with Iran during the hostage crisis.  Rich fled to Switzerland and was pardoned by U.S. President Bill Clinton in 2001 on Clinton’s last day in office.

A month after his boss left to join Glencore, with papers piling up on his desk, David’s ex-boss  called.  ‘Three days later, David was working for Glencore as an expert on letters of credit.  In 1989 the company moved to the US.  David and his then wife came, too.  The company grew from a staff of about 20 to 250 in two years.  David rose to become head of finance.  He retired in 2012.

As for racing, in his late 20s David “took the plunge.”  His Lotus road car was stolen.  The insurance company gave him “a very nice check.”  He asked himself, “If not now, when?”

A week later, David bought a Formula Ford.  (A single seat, open wheel race car like the one featured in Rush, the biographical sports film about the Hunt-Lauda rivalry between two Formula One drivers.)  Two weeks later, David entered his first race.  He finished 21st out of 104.   He entered three more races that season, finishing 8th in one of them.  “I realized if I worked at it, I could have some success.”

That would prove an understatement.

During the next few years, while married with two kids and a demanding job, David also did his own work on his cars.  Looking back, he says, “I’m not sure when I slept.”  At 19, he’d built his own car from scratch.  To teach himself, he dismantled and cleaned another car and put it back together.  Racing cars at that level are simpler than road cars, he says.  Among other things, there are no heaters, lights or indicators.

In 1983, David scored his first win at Brands Hatch, a beloved British track in Kent, UK, where the British Grand Prix used to be held.  “I still have a vivid memory of crossing the finish line a few tenths ahead of the pack and the great satisfaction I felt.”

Once he’d tasted victory, David racked up many more wins.  In 1987, he won a national championship in the BRSCC (British Racing and Sports Car Club).  The organization holds events for cars built before 1974.

In 1987, there was a “season long fight” of 18 races between 4 drivers.  Heading into the last race, David’s main opponent was Paul Wallace whose brother had won the Le Mans in France, who had “lots of help,” and who was “slightly quicker than me.”  In the last race, David was two points behind.  To prevail he had to not only win the race but also score the fastest lap.  The twosome passed and repassed each other.  On the last corner, David overtook Wallace.  He won by 1/10th of a second and set a class record that lasted about 20 years.

“I’ll never forget that moment,” he says.  The trophy was filled with beer and passed around among drivers and spectators, all of whom took a sip.  (Ah, for the carefree pre-COVID days of sharing and slurping.)  In the process, the trophy received a dent.  David still has that dented trophy and prizes it.

That success spurred a 1988 call from a London oil broker who was starting a team of Formula 3 drivers. Formula 3 cars have about 50% more horsepower, better grip and brakes, plus wings and slick tires.   All expenses would be paid.  “It was a logical next step,” David says.  But Fate intervened.  The oil market dropped.  The team owner pulled out.

The Porter family moved to Stamford, CN, though he admits, “There was a notion in England that American drivers were wussies.”  David soon learned otherwise.  Accustomed to qualifying first or second in a race, he qualified ninth.  But he “got to know” American tracks and won often in ‘90-‘93.

With two kids in college and a divorce in the works, David had neither time nor money to devote to racing.  He quit for 11 years.  About 2005, then married to Patricia, who’d also worked at Glencore, “The bug started to bite again.”  He and Patricia spectated at a historic car race at Mont-Tremblant in Quebec.

After, he made a deal with Patricia.  He’d sell his motorcycle and buy a historic racing car.  Since then, he’s won hundreds of times.  “I’ve lost count,” he admits. “It’s tremendous fun.”   Historic car races don’t allow sponsorships.  “It’s supposed to be about gentlemen having fun with friends.”  In 2012, he bought a Le Mans prototype and started racing on tracks around the eastern US.  A five-man crew now works on his cars.

David bought a Pescarolo, named for French racing driver Henri Pescarolo.  The car has “always been my passion.”  He raced it, 2012-2018, setting an outright lap record at Watkins Glen.  (The fastest lap by anyone, ever, in any type of car, at that track.)  He came in first in a classic twelve-hour race at Sebring in 2017 and in a 24-hour race at Daytona in 2018.

Say what? I asked.  You drove around and around for 24 hours?  No, he explained.  He drove for an hour, four times in 24 hours.

How does David overcome fear of driving at dangerous speeds?  “My desire to race is so strong that I essentially compartmentalize fear.  Steve McQueen said, ‘Racing is life; everything else is just waiting.’  Not sure I’d go that far, but through racing you experience the highs of elation when things go right and the depths of disappointment when they don’t.”

Congratulations, David.  Thanks for sharing the memories.  Laurel Oak abounds with interesting people.  We welcome our new track star. 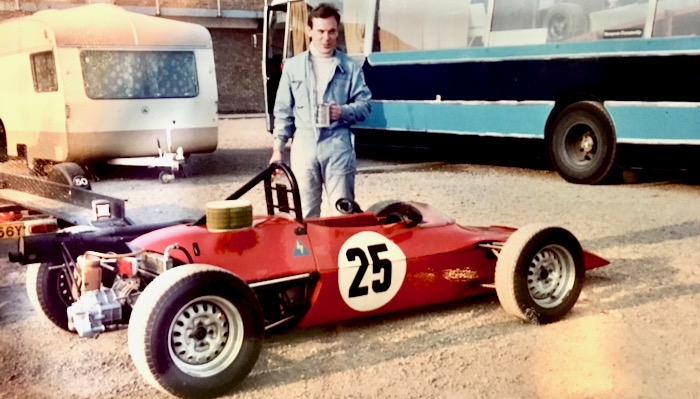