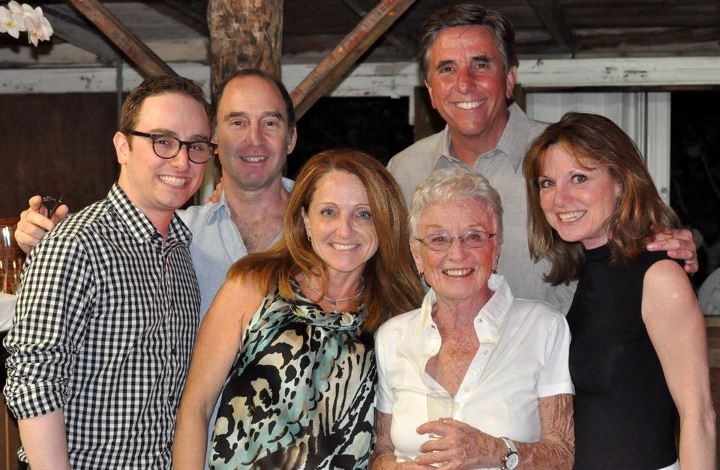 Elen Schwartz’s family. Donna and her husband Bernie are at right in this photo.

Last week we met the irrepressible Elen Schwartz in the first part of this story.

Now, in this second column about her remarkable family, you will get to know her equally irrepressible daughter, Donna Rockwell…

Producer for Emmy-award-winning TV journalist Daniel Schorr, Donna was with him as the Iran hostages returned to the US and on the White House South Lawn the next day as newly elected President Ronald Reagan welcomed them home. She accompanied Schorr on Reagan’s trip to Checkpoint Charlie at the Berlin Wall and to summits in Bonn and at Versailles Palace.  She  then became CNN’s Capitol Hill producer. At CNN, 23-year olds Donna and Katie Couric became good friends and remain so today.

Donna covered the House and Senate for three years. She was then hired by NBC station WRC-TV as Executive Producer for anchorwoman, Susan King.

Donna met Bernie Smilovitz when he was a young sportscaster in DC. They fell in love (he could speak Yiddish to her grandmother!) and married in 1985. Three months later Bernie was offered his dream job, Sports Director for WDIV-TV in Detroit. The couple moved to a Tudor home in Huntington Woods and started a family.

Donna adored Michigan. For the Huntington Woods 4th of July parade, she recalls, she “stood on the sidewalk watching and weeping—it was so quintessentially American.”

Donna became an executive producer at Detroit’s WJBK-TV,headed by Marla Drutz—one of the few women running a TV station at the time. Donna oversaw For Kids Sake, a station-wide public service campaign.

Donna also dove into raising sons, Zach and Jake.  “I went from producing TV news to producing the lives of two boys.”

An “urge for more” inspired Donna to pursue a doctorate in Clinical Psychology at the Center for Humanistic Studies (now the Michigan School of Psychology).  She wrote her dissertation on the psychology of fame and celebrity.  As a result, Donna often appears as a fame expert on TV shows, radio and social media.  She says obsession with fame, linked to the rise of Instagram and social media, has caused depression, anxiety and suicidal thinking to jump over 30%. with girls as young as 9 attempting suicide.

Hoping to diminish that influence, Donna founded Already Famous with Dr. Donna.  The online wellness community for women and girls focuses on building self-confidence and inner worth.  Donna wants women of all ages “to see that they’re enough, perfect just the way they are, and already famous in the ways that really matter.”

Donna says, “My mother may not have danced for Balanchine, but she knew, on the inside, that she was the star of her show.”

Rather than crave external validation, Already Famous helps women and girls discover their internal compass and find “the lust for life, confidence and resilience” her mother had.  As Donna learned from Elen and hopes to pass on to others, “True joy is an inside job.  The only real happiness is to find joy within.  Then we’re able to share that joy with the world.  Of course, mixed with a little hot sauce and sparkle.”

In just over 300!!! columns I’ve written for RTS, this is my first mother/daughter story.  Thanks, Donna.  And Elen—wherever you are.  Sparkle on!