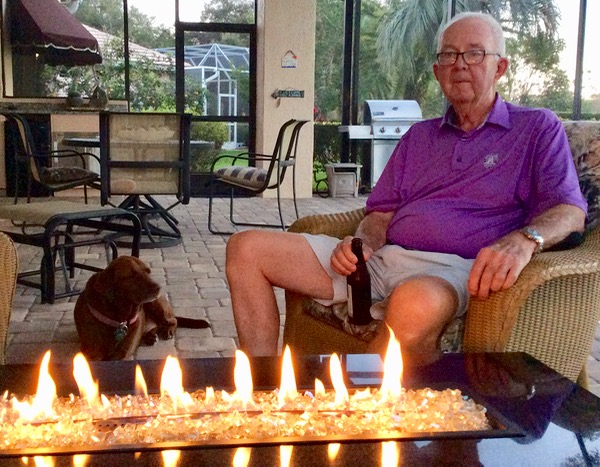 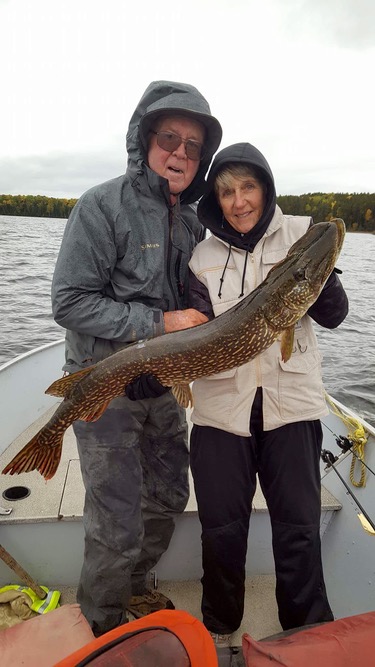 Conrad and Linda Freeman show off a whopping pike caught in northern Ontario.

One of my heroes in Florida is a man nicknamed Connie, a master of challenges on the golf course.  Now 80, he’s shot his age or better 75 times.  In light of how he’s handling his latest challenges, he’s an even bigger hero.

Having played golf for most of my adult life, I can confirm how hard it is.  Unlike tennis, where an orb blasts toward you or just pops over a net, requiring you to run and dart and lunge, the golf ball just sits there.  Granted wind, water and sand add trouble, but the golf ball waits patiently.   Nonetheless,  striking that 1.66” round missile is beyond confounding.  I was consoled to hear Conrad admit, “Golf’s the hardest game in the world.”

For most of his life, Conrad has managed to romance a golf ball the way Richard Gere romanced Julia Roberts in Pretty Woman.  Conrad first shot his age at 66. (The youngest golfer ever to accomplish this was 59; the oldest, 103.)  In April, 2004, Conrad scored nine birdies in one round for a 65!  (7 below par)  Conrad was club champion at Laurel Oak Country Club in Sarasota “8 or 10 times.”  (I can give you chapter and verse of the one time my team won the ladies draft.)  Conrad won an international tournament on the torturous Tom Lehman-designed “Teeth of the Dog” in the Dominican Republic three times.  (He and wife Linda also won a couples tournament there.)

Oversized drivers are the norm these days. Some come with threatening names like Epic and Rogue. Conrad claims he owned the first oversized driver. At 18, he and  friend Tom Eidsvold, 15, played in a week-long tournament at Alexandria Golf Club in MN.  They slept in their car and cleaned up by diving into a lake.  Conrad stored his driver in the trunk.  One night it rained.  The club got wet and swelled up.  It was the only driver he had.  He used it to finish the tournament.  (But no W.)   He and Tom grew up and joined Alexandria and still play there together as they do at Laurel Oak CC in Florida.

Conrad’s sons and grandsons all love golf.  Grandson Will, 17, plays in tournaments around the US and  hopes for a college golf scholarship.

Conrad’s dad introduced him to golf, age 10, at Alexandria GC near his home in Morris, MN, a town of 4000.  Conrad was hooked.  He played for his high school golf team at Pomme de Terre, a public course—and the only course in town.  He won “many” small tournaments around the state, a lucky thing since, as he recalls, “I needed the money.”  He earned around $100 per tournament—“pretty good money back then.”  He also loved basketball.  At 17, he became an All-Conference basketball player in MN.

Conrad’s grandfather, an immigrant from Iceland, was a farmer.  He lost his land in the Great Depression and got a job auditing banks. Along with his grandfather, father and brothers, Conrad purchased a small bank in 1945. Ten years later Conrad bought the family out. He continued to run the bank along with Linda and his 3 sons, commuting 50 miles a day. Linda planted flowers and opened accounts and  became a securities broker. They sold the bank in 1995. 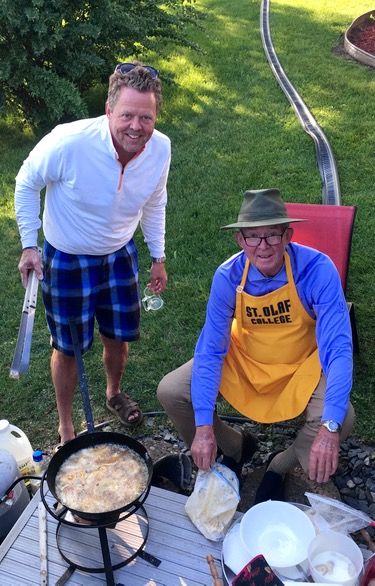 Conrad and Linda have been married for 30 years.  It’s a 2nd marriage for both.  When they first wed, Linda, who loves to fish, promised to learn golf if Conrad would take her on 2 fishing trips a year. They’ve enjoyed each others’ passions ever since.

About 10 years ago, Conrad could no longer execute the chips and putts at which he once shone.  He began having trouble with balance. The couple saw several specialists, but it was about 5 years before a true diagnosis was made. Conrad has Parkinson’s disease. He still loves and plays golf but has eased up on his personal expectations. Though he doesn’t have the typical tremor, he has trouble walking and sometimes stumbles. (Being tall, he has farther to fall.)

Conrad and Linda have faced this challenge together. He says, “I couldn’t do this without Linda.”  They have joined Parkinson Place in Sarasota, a multidisciplinary care center started and run by Marilyn Tait, whose late husband had Parkinson’s. The center offers 80 free programs a week in exercise, nutrition, voice, care giving, etc. Conrad attends regularly.

Parkinson’s patients tend to lose their ability to project their voices. Conrad’s  Loud Voice classes paid off last fall. He and Linda had driven 500 miles to Red Lake in northern Ontario to catch lake trout that spawn in the shallows in fall. It was so cold and rainy that for 3 days they couldn’t fly to Sandy Beach Lodge on an island where they always stay. They consoled themselves in the nearby mainland town’s only pub.

One night in the pub, a young man Linda describes as “in high spirits” noticed Conrad’s t-shirt.  It bore the phrase UM YA YA, the official cheer for St. Olaf College in Northfield, MN, which Conrad attended and still supports.  The young man, wearing what Linda calls a “ratty” t-shirt, said to Conrad, “Man, I love your t-shirt.  I really love your t-shirt.”  He repeated his compliment several more times, then suggested to Conrad that they trade.   By that point, Linda recounts, everyone around them was listening.

Conrad, who wore a second t-shirt underneath, stood up, took off his shirt and handed it to the young man.  He said, “If you’re going to wear the shirt, you’ve got to know the fight song.”  Using the loud voice he’d practiced at Parkinson Place, Conrad belted out the entire song.  “A huge cheer erupted at the end,” Linda says.  “Somebody sent over beers.  People clapped Conrad on the back, saying, ‘Good job, man!’”

I know firsthand how tough Parkinson’s can be.  My sister Anne and I watched our mother decline from its complications, afflicted by tremors, mood swings and confined to a wheelchair.  But Conrad and Linda are doing their best to understand, deal with and rise above the symptoms.

Linda says, “My nursing skills have kicked up a notch.  But the disease has brought us closer together.  We’re really a team.  Conrad’s disease is a lesson in life.  We never know what the future holds.  Up north, some of Conrad’s golf buddies don’t play with him anymore.  Others do.   They realize it’s about being together, not about winning a dollar.

“I’m so proud of Conrad.  He keeps on plugging, moving forward.  He gets frustrated sometimes, but we can talk it through.  We find something to laugh at every day.  We take pleasure in little things, like sitting at the fire table on the lanai with a drink or at the fire pit at the lake with the family.”

Now Conrad has bigger fish to fry in the health department.  But Linda says, “Conrad doesn’t let his disease define him or defeat him.”

I should say not!  A couple of weeks ago, Conrad played in the Laurel Oak Cup golf tournament for Special Olympics. He teamed up with son Stefan, grandson Will and BFF Dave Battey.  Daughter-in-law Michele was their scorekeeper.  The team won 2nd low gross.

Keep swingin, Conrad.  You have a Connie’s Army of fans cheering you on. 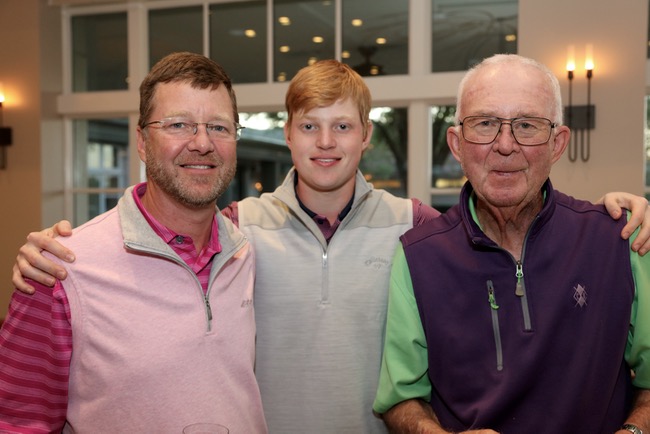 27 thoughts on “After shooting his age many times, Conrad Freeman’s latest par is Parkinsons”