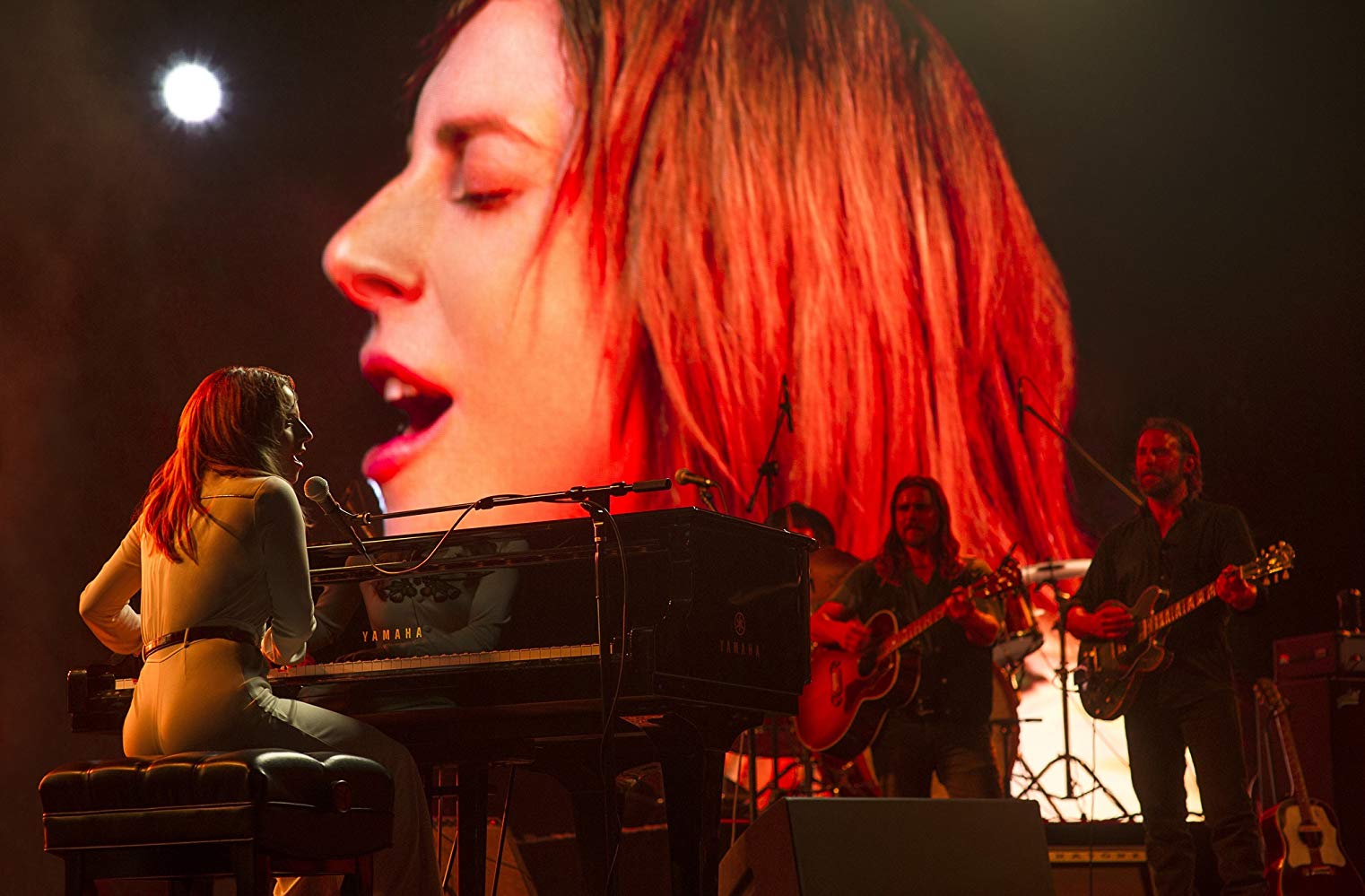 Films based on this time-honored story have consistently broken the rule that a remake is inferior to the original, such as what happened to 1951’s The Day the Earth Stood Still when it was remade in 2008. However, the 1937 film A Star Is Born, boasting a stable of talented scriptwriters headed by the tart-tongued Dorothy Parker, and starring Janet Gaynor and Frederick March, was better than the 1932 movie to which it is similar, the well-received What Price Hollywood? To many director George Cukor’s 1954 A Star Is Born was even better because of Judy Garland’s rich and powerful singing voice. In 1976 the setting was moved from Hollywood movie studios to the rock concert stage, with Barbra Streisand and Kris Kristofferson playing the lovers.

And now we have an updated version of the 1976 film directed and co-written by Bradley Cooper, who plays opposite music icon Lady Gaga. And what an engrossing film it is, the opening segment of Cooper’s Jackson Maine stage performance shot in the style of a rock concert documentary—hand-held camera shooting close-ups, quick cuts from the singer’s face to his finger’s striking the guitar, then to the band and to the audience. The short sequence bursts with such high energy that you never think to look away at your popcorn. Jump to a tipsy Jack in his van sipping from his gin bottle. With his bottle empty, he wants more drink, so he directs the driver to stop at the closest bar.

The dive is filled with patrons enjoying the regular Friday night drag queen karaoke performances. However, the current singer on stage is the lively Ally (Lady Gaga) singing in French “La Vie En Rose” with such fervor that even in his alcoholic haze Jack is bowled over. She moves through the crowd and mounts the bar as she sings, then lying down right by Maine, she and Maine lock eyes.

Ally’s, friend recognizing Jack, takes the star backstage to meet her. She agrees to go with him, and while he waits for her to change, he gives in to the owner’s plea to sing one of his songs. Ally comes out during his performance, and they again lock eyes. They stop at another place for a drink, and during their conversation he learns that she can write as well as sing a song. She reveals her insecurities, and he tries to assure her that she ought to pursue her dream of a musical career.

Jack is so enthralled that he invites her to his next gig in another city, but she turns him down because her demanding boss has scheduled her to work at his restaurant. Back home Ally’s Sinatra-loving father Lorenzo (Andrew Dice Clay) urges her to accept the invitation. Jack’s driver is waiting outside to whisk her away to a waiting private jet, but she still refuses. Both father and driver persist. She gives in and is soon in the air winging her way toward Jack.

On stage when she arrives, Jack is pleased. Finishing his song, he says that he has arranged the song that Ally has written and wants her to join him at the mike. Totally embarrassed, she tries to resist, but is soon beside her mentor, the two belting out her song to an enthusiastic crowd. Leaving her waitressing job, Ally joins Jack on his concert circuit, becoming an overnight hit with the public.

All is not bliss in Ally’s new life due to her lover’s long-standing problems. His growing deafness is complicated by tinnitus, which periodically trigger anxiety attacks and temper tantrums. His older brother, Bobby(Sam Elliott) has been serving as manager, one of his major duties being to clean up the messes created by Jackson’s alcoholism. We also see that he is into snorting cocaine as well, marking the downward arc of his career. During one dispute he enraged Bobby leaves.

Ally continues to love Jackson, even agreeing to his impulsive proposal to get married. Neither Bobby nor her father are at the impromptu ceremony. He tries to straighten out, as we see by his attachment to their new dog Charlie and his attending an AA meeting where he admits to his alcoholism. Then Ally is approached by British talent manager Rez (Rafi Gavron), who envision a bright future for her as a pop music star.

Jack’s initial unease about this grows as Ally learns to add dancing to her singing and belts out what he considers are shallow songs. She becomes such a huge success that she is nominated for three Grammy Awards. Upset by what he regards as his wife’s selling out, he infuses jealousy into his criticisms of her. It is evident that he resents losing control of her career. During their heated argument he strikes at her vulnerability by calling her ugly. She is hurt and stunned.

Jack’s decline races now to the bottom. He has become regarded as so unreliable that he is bumped as the opening act at the Grammy Awards in favor of a rising young singer. His relegation to performing backup music for the singer adds to his humiliation. What he does when his wife goes on stage to receive her first award seals his fate of his failing career. He realizes that he is now a drag on her success, so he makes one last, sacrificial contribution to her career. Ally’s response will probably remain forever in your memory. Fans of the films might debate whether this conclusion is more heart-wrenching than that of the 1954 remake, but all will agree that it leaves a lump in the throat. It is not a put-down to call both films real weepers.

Everything about this film is first rate, including the use of the backing group Lukas Nelson & Promise of the Real, long associated with Neil Young. Lady Gaga shows that her acting ability is equal to her singing, and Bradley Cooper that he is equally talented as a singer and director as well as an actor. Few stars have shown such chemistry together in scene after scene!  Sam Elliott  again is impressive in his supporting role, his incisive lines beautifully capturing the essence of a good song: “Music is essentially 12 notes between any octave – 12 notes and the octave repeats. It’s the same story told over and over, forever. All any artist can offer this world is how they see those 12 notes. That’s it.” Given the rise of the #MeToo movement, discerning viewers, listen to Jack sing “Maybe it’s time to let the old ways die” will see that the way Jack reacts to Ally’s moving from his shadow adds to the film’s relevancy. This is a love and a career story for the ages.

This review is in the October issue of VP along with a set of questions for reflection and/or discussion. If you have found reviews on this site helpful, please consider purchasing a subscription or individual issue in The Store. Past issues of VP are available back to 2012, all of which are accessible to annual subscribers

After rock star Jackson Maine discovers Ally (and falls in love with her), her career skyrockets while his disintegrates in a haze of alcohol and drugs.
Editor Rating ★★★★★5 out of 5
More Details