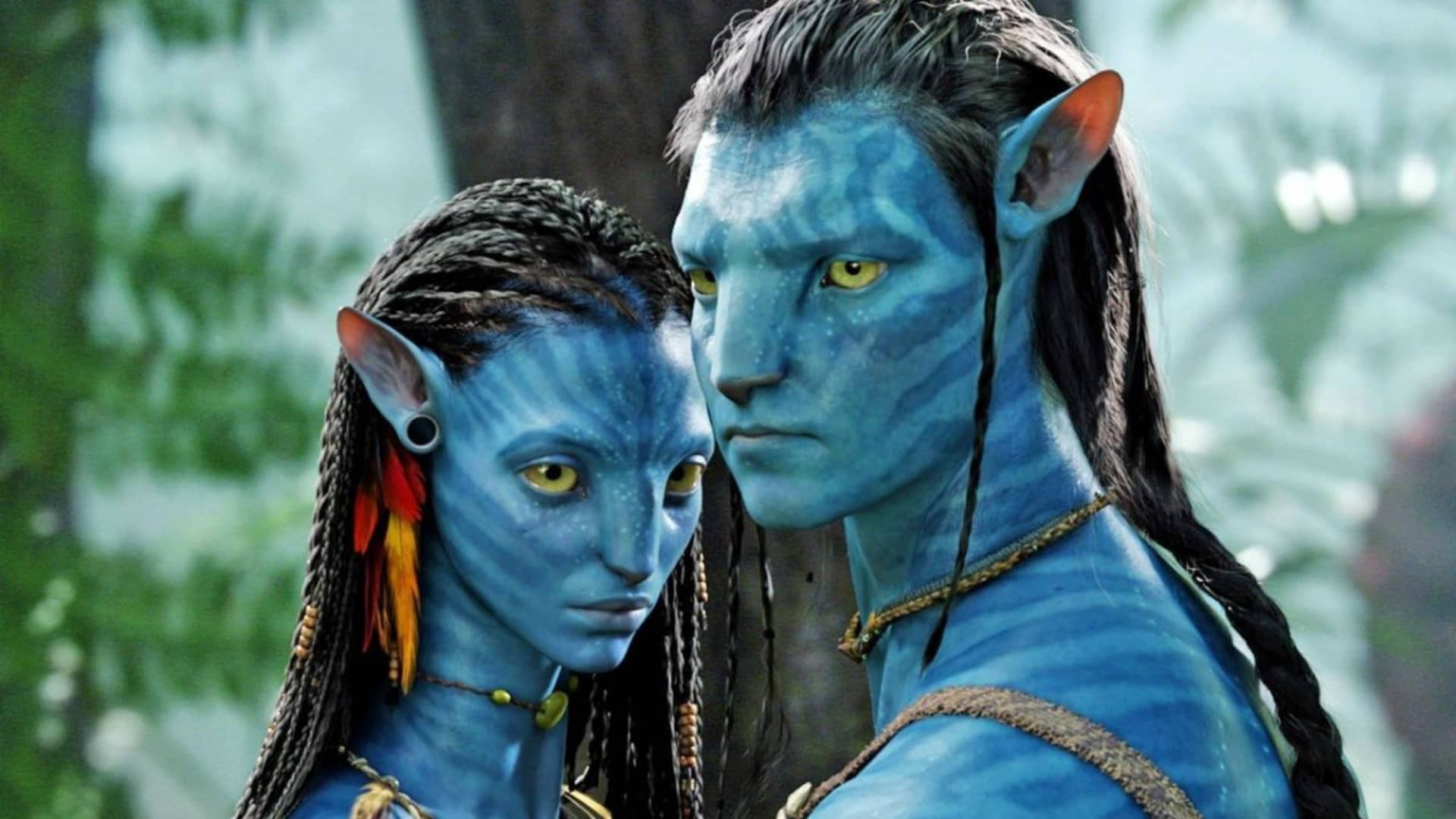 Redeem me from human oppression,
that I may keep your precepts.

James Cameron’s sequel to Avatar is violent but so beautiful that it is well worth the long wait. And to think, it is the first of four sequels! Cameron even shot the third one simultaneously with this one, so that in 2024 we will be able to see it, followed by the other sequels in 2026 and 2028. Cameron retains the original’s anti-colonial and pro-environmental themes, plus the timely one of hospitality or acceptance of refugees. This film is BIG, not just in length of time but in terms of its scope as well. I love also that inter-species communication becomes so important in the latter half of the film.

Returning to their roles are Zoe Saldana and Sam Worthington as the married Na’vi Neytiri and Jake Sully; also Sigourney Weaver. The latter is surprising in that her character Dr. Grace was killed in the first Avatar. This time she plays a new character, a teenager at that, Kiri, the biological daughter of Dr. Grace and now the adopted daughter of Neytiri and Sully.

Also returning are Giovanni Ribisi playing such bad guys as Parker Selfridge, a high ranking executive for RDA, the soulless corporation that wants to exploit Pandora and get rid of the Na’vi, and Stephen Lang returning as Colonel Miles Quaritch. But, you might say, didn’t he also die in the first adventure? Yes, but RDA (Resources Development Administration ) scientists have been able to embed his DNA and his consciousness into one of the ten-foot tall Na’vi so that he can now navigate through Pandora’s forest as freely as Jake—and is he ever determined to wreak vengeance!

For a number of years Jake and Neytiri enjoy wedded bliss with the Omaticaya tribe. Jake has long mastered the clan’s ways, including riding the mountain banshees or ikran that serve as aerial horses. With his neural whip or queue encased in his tail he can connect with other creatures for communication, and with Neytiri for sexual reasons. The two now have three of their own children plus the adopted Kiri and one other adoptee, a human baby left behind called Spider (Jack Champion). Neytiri has difficulty accepting a human, so the boy feels like an outsider in the Na’vi family. He is often left to wander through the forest on his own.

The Na’vi’s idyllic life is shattered when a fleet of giant space ships return loaded with “sky people,” as the Na’vi call humans, and a variety of death belching weapons. The rare mineral, gravity-defying unobtanium, is too vital to give up. RDA’s goal this time is not just to exploit Pandora but to settle it with human colonizers, which means removing the threat of the Na’vi, by any means necessary. Along with Quaritch are other new avatars, uploaded with the memories and skills of brutal Marines. Led by General Ardmore (Edie Falco), their first mission is to locate and kill Sully and his family.

The Na’vi barely survive an attack, so Sully and Neytiri reluctantly flee with their children, eventually reaching the Metkayina clan who have adapted to “the way of the sea.” Their chief is Tonowari (Cliff Curtis), and he and his wife Ronal (Kate Winslet) are about as welcoming as some current day Americans are to the Latin American refugees flocking to our southern border. Appealing to his better nature, Jake and his family are granted shelter. Slowly they learn how to navigate the waters and relate to the creatures in it, though they will always lag behind the sea clan. The latter over the centuries have evolved so that they are able to live under water when necessary and navigate its depths with ease—they have thicker tails and can change their hands into something like fins for swift swimming.

Words fail me in describing the beauty and thrills of this section of the film. We see by the special CGI underwater effects that Jams Cameron has not been idle during the 13 years that have passed since Avatar. He has shown his love and fascination for the sea depths by his search and documentary about the wreck of the Titanic, which he has visited numerous times. All his underwater work has contributed to the making of this film. The over-used word “Awesome” does not begin to evoke the feelings generated by the scenes of flora and fauna plants, many of them in glorious, glowing colors. And so far I have seen the film just in 2D; for the first time in my career I plan to return and shell out the blood money the studio demands for its 3D version because so many critics have raved over their experience of watching it in this format.

Of course, Cameron the script writer believes in the old adage, “You can run, but you cannot hide.” Quaritch and his heavily armed killer crew will show up, and there will be exciting battles—parents should think twice about exposing their preschool child to such brutality (though it is not as brutal as most medieval epics, the film rated PG-13, and not R). The hosts of the land Na’vi will suffer much collateral damage, and because we know that there are three more films to come, it is no spoiler to write that most of, though not all, the good guys survive. Cameron wants us to buckle up and prepare for a long, exhilarating ride.

I referred above to interspecies communication—this is shown in the episode centering on Lo’ak, one of Jake and Neytiri’s sons who comes to the aid of the wounded Payakan, a whale-like creature called a tulkun. Intelligent sea creatures who have had a long relationship with the  Metkayina people, the tulkun have a code of nonviolence which Payakan violated by killing the RDA hunters who had killed his mother, a fight in which several of his companions also died. (Humans hunt tulkun for the yellow liquid secreted by a gland at the base of their skulls that stops human aging, making it far more valuable even than unobtanium.)

Exiled from his kind, Payakan was thus vulnerable to attack with no one to watch his back. When Lo-ak asks about his past, the creature replies, “It’s too painful.” His friendship with Lo’ak will prove very important in the climactic battle with Quaritch and his crew, one of the most spectacular conflicts to be seen on film, thanks to all of the innovations fostered by Cameron and his huge film and special effects crew. (Think of the great scene from Moby Dick of the encounter with the great white whale, but magnified a hundred times in magnitude!)

But the delights of this film are not all CGI-generated. It will be interesting to watch the development of Kiri in succeeding films, as the mantle for protecting Pandora passes on to a new generation of Na’vi. Some critics  have seen her as a potential Messianic figure, desiring more pacific ways of resistance than her parents. Maybe she will be more attuned to what is called the “Tulun Way,” mentioned above, in which violence is renounced.

With so-called advance countries taking advantage of weaker African nations that abound in mineral wealth, as well as such nations as Haiti still suffering from the ruinous effect of the excessive slave reparations forced on it by France for some two hundred years, Cameron’s anti-colonialist film could not be more relevant. RDA, having profited from the despoilation of Earth, and now intent on strip mining Pandora regardless of costs to its environment, is a good stand-in for our international fossil fuel corporations that have fought long and hard against those warning us of global warming and other environmental dangers. Of course, most viewers will not buy an expensive ticket because of such concerns, but they will nonetheless absorb the messages embedded in the film while being thoroughly entertained. I hope this film matches and then overtakes the enormous box office success of the original film. It will not be just James Cameron who is enriched by such success—we all, including our planet, will be richer for it.

The Na'vi family has to flee to a distant land of water & learn new ways when the humans return to Pandora's moon to rape it for minerals.
Editor Rating ★★★★★5 out of 5
More Details