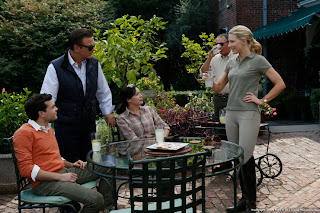 Jasmine with husband and son (far left) lived a lavish life
style in the Hamptons before fall into the impoverished class.
(c) 2013 Sony Pictures Classics
‘But woe to you who are rich,
for you have received your consolation.
‘Woe to you who are full now,
for you will be hungry.
‘Woe to you who are laughing now,
for you will mourn and weep.
Luke 6:24-25
We hear much in op eds and political debates about America’s class warfare, about how the 1% of Americans who allegedly control as much wealth as the bottom 90% are imbued with a sense of entitlement and superiority. I can think of no better illustration of this than Woody Allen’s new film Blue Jasmine, in which Cate Blanchett’s portrayal of a once wealthy wife is bound to earn her a Best Actress nomination.
Flower lovers will know that the title does not refer to the plant, the flower of which is usually white or blue, but to the mood of the character named after it. Jasmine (Cate Blanchett) and Ginger (Sally Hawkins) were raised together as adopted children from different sets of biological parents. Their parents showered more attention on beautiful Jasmine over the plain Ginger, so the latter left home as soon as she could to make her own way. She married working class Augie (Andrew Dice Clay), the two of them producing two boys, both of whom are destined to have weight problems. Then comes the day that they hit the California Lottery big time, winning $200,000. Intending to start his own business, Augie sees this as their way out of their life of living from paycheck to paycheck.
Meanwhile Jasmine has dropped out of college to marry the handsome and wealthy Hal (Alec Baldwin), a rich Wall Street schemer who is always using other people’s money to fund dubious new ventures. As evidence of her upward mobility drive she has changed her name from Janette to the more upscale name of the flower. They have one grown son Danny. Jasmine’s life of conspicuous consumption in the Hamptons is filled with Manhattan shopping sprees, lunches at elegant restaurants, and hosting parties and lavish charity events. They feel put upon when Ginger and Augie pay them a visit during their trip to New York City, but when they learn that the pair have just won a big sum of money, smooth-talking Hal seduces Augie into investing it in what turns out to be a Ponzi scheme. Ginger, who was not enthusiastic about this, becomes even more worried when she spies Hal lunching with and kissing a woman who is not her sister.
All the above is told in a series in intermittent flashbacks as Jasmine, now popping pills and taking frequent sips of vodka from her flask or glass, tries to cope with her new distasteful circumstances. Not only has she finally caught her philandering husband in one of his numerous affairs, but also she precipitates the series of events that leads to Hal’s arrest, conviction, and imprisonment. Unable to cope he has committed suicide. Jasmine’s survival plan involves her flying cross country and moving in with her sister, whose marriage had ended with divorce after they had lost their money. None of this may seem funny, but Allen’s wit is scattered throughout the film.
As has been pointed out by several reviewers, the plot is very much like that of A Streetcar Named Desire, with Ginger’s fiancé Chili (Bobby Cannavale), a lowly (to Jasmine) garage mechanic, quickly developing a passionate hatred for the one he calls “A phony!” Chili is upset that his plans to move in with Ginger have to be put on hold now that Jasmine is there. Ginger feels caught in the middle, her sister loyalty strong despite the way Jasmine has always looked down upon her.
Jasmine wants to start life anew by finishing college and taking a computer course so she can obtain an interior decorator’s license, but has to find work to fund this, reluctantly following Chili’s tip to obtain a receptionist’s job at a dental office. However, this soon ends when Dr. Flicker (Michael Stuhlbarg) tries to follow through on his lust for her. Then she meets the man who could restore her to the status she feels she deserves, the well-heeled wealthy diplomat Dwight (Peter Sarsgaard). He has long range plans to enter politics and needs a trophy wife like Jasmine. But will her less than wholesome past marriage and tendency to dodge reality and deceive herself and others get in the way?
Every member of the ensemble cast performs well, but Cate Blanchett’s portrayal of the once wealthy Jasmine is unforgettable, perhaps the only other portrayal of a Narcissistic neurotic     woman that compares being that of Vivian Leigh’s Scarlett O’Hara (she also played Blanche!). Her character is so fully defined—nervous tics, almost incessant drinking, tendency to talk out loud inappropriately in public places, disdainful expressions, and elegant dress—that she emerges as a real person. And even though we see what a despicable person she is, we are still drawn to her and, if not root for her, wish that she might achieve a measure of self-understanding. This is a fascinating, detailed study of a woman whose worst enemy is herself. Her fate seems to bear out what Dr. Martin Luther King, Jr. said in a far different situation, but which applies to Jasmine’s fate, “The Arc of the Moral Universe Is Long, but It Bends Toward Justice” Although not intended as a social justice film, Mr. Allen’s revelation of the hollow lifestyle of “the rich and famous” as seen in Jasmine could be a midrash of Jesus’ denunciation of the uncaring rich, or of the equally harsh denunciation of the wealthy by the prophet Amos. One of Mr. Allen’s best films in years, this must not to be missed!

Spoilers near the end.

1. Compare Jasmine to Blanche DuBois in A Streetcar Named Desire. Or to Scarlett O’Hara. What does the opening sequence of Jasmine talking to a fellow plane passenger reveal about her?
2. How is Chili a good stand in for Stanley Kowalski? What insight does he have into Jasmine that her sister lacks?
3. Despite her many flaws, what did you find attractive about Jasmine? Was this mainly physical characteristics? From what you see of her relationship to her husband and to Dr. Flicker, how do you think that she is a victim of life’s circumstances?
4. What do you think of her efforts to develop the one skill she seems to possess—her sense of style and décor? Do you think that she could become successful as an interior decorator? What might get in the way of such success?
5. What fatal error does she make when she meets Dwight? Which of her many flaws do you think lead her to commit this mistake?
6, Although their story is secondary, how does Ginger and Chili’s story compare to that of their sister-in-law’s? How is his love close to agape love?
7. Why does her son Danny act toward her the way he does when Jasmine hunts him down? Do you think that the ending bears out the insight of Dr. King’s quotation?