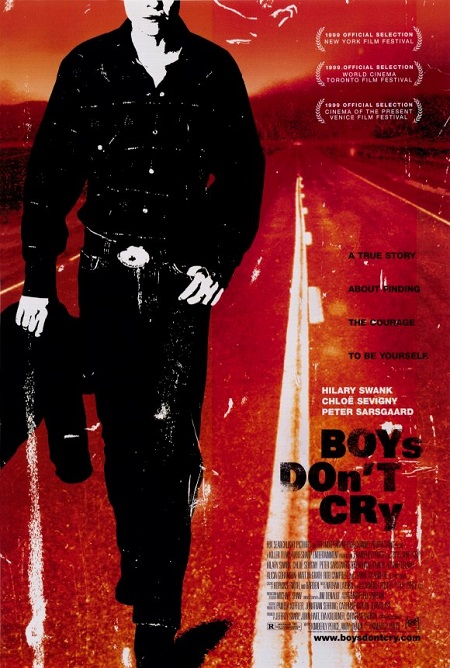 Because this 1999 film is a good companion film for the Oscar-winning A Fantastic Woman, we reach back into our archives for this similar-themed film.

Who can search out our crimes?

We have thought out a cunningly conceived plot.”

For the human heart and mind are deep. 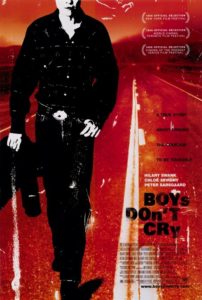 The human heart is indeed deep, as we see in this true-crime drama, which brought a Best Actress Academy Award to star Hilary Swank. The film is the result of five years of research by director and co-writer Kimberly Pierce. What at first seemed like a double murder of passion turned out to be a hate crime when investigators were surprised to learn that the main victim Brandon Teena was in reality a girl. Brandon had been a newcomer to Falls City, Nebraska, but “he” quickly became the heart throb of young women at the bar where young adults hung out looking for companionship and excitement in the small town. They thought of Brandon as cute, and adorable, the tender kind of guy who knew what women wanted in a man. They did not know, even Lana (Chloe Sevigny), the beauty who enters into a passionate love affair with him, that Brandon Teena grew up just seventy-five miles away as Teena Brandon. Often in trouble with social services, Teena felt that she was a male locked into a female’s body. Being from the penniless lower cast, she could not afford a sex-change operation, but she left home determined to dress and act like a young man.

Lana and her child-hood friend John (Peter Sarsgaard) accept Brandon as the attractive boy he appears to be–as do their other friends and Lana’s mother. But John’s feelings become ambivalent the more he gets to know Brandon. Something does not seem to be right. As his suspicions mount, so does the tension. We know the tragic outcome of the story, but nonetheless the suspense is well maintained. It would be easy to dismiss Brandon/Teena as a pervert deserving of his/her fate. After all, a life built upon deception is bound to unravel sooner or later, causing those who have been deceived to feel betrayed and misused. But the script and acting are so good that Brandon/Teena comes across as a disturbed human being striving to find an identity and the unconditional love and acceptance which “he” so desperately needs.

John, who murders Brandon out of a sense of rage at being betrayed, is also portrayed with understanding, rather than depicted as a loutish brute. John stands in for a good many American males insecure or confused in their understanding of their own sexual nature. Such men are eager to prove their masculinity by attacking anyone whom they believe threatens it.

This is not the kind of film you probably will choose to show to a church group, but it is a film that challenges us to look into the mysterious heart of some disturbed folk whom Christ might have been able to reach out to in love and acceptance. To some such a film is a mark of progress in that the Motion Picture Academy selected to honor the subject of the film by making the “Best Actress” Award to one of its two stars, whereas others, mostly in the church, will see this as another sign of Hollywood decadence.

Set in Nebraska, a troubled girl posing as a boy is murdered when the long-time friend of the lover discovers the truth. about the girl/boy's sex.
Editor Rating ★★★★★5 out of 5
More Details