Skip to content
Today there were the usual eulogies of Dr. Martin Luther King, Jr. that we expect to hear and see on TV, cable, and radio. If you are an older adult, you might know much of the “I Have a Dream” speech by heart, having heard it so man hundreds of times since this Holiday was established. Well and good, but for those really familiar with the life and writings of this great American, the question arises, “Are most of the effusive tributes being made to a very sanitized Dr. King, a Dr. King the American who no longer poses a threat to the status quo? Dr. King made his famous speech in 1963, which is mainly what we heard today… 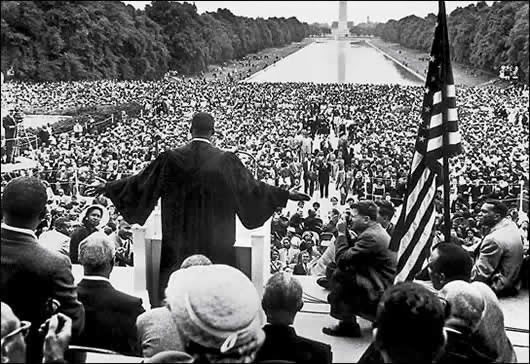 But on April 4, 1967 he made a very different one that was not praised but condemned, even by some of his own staff. To them he went “off message” by condemning the Vietnam War, rathering than speaking just of civil rights. This cost him the support of President Johnson as well as many white liberals, and even most of the established black Civil Rights leaders. It confirmed to FBI head J.Edgar Hoover and many white racists that this radical was indeed a Communist in league with Russia.
Thus  I was glad tonight (Jan. 20) that Lawrence O’Donnell on his MSNBC program brought this speech up. A better student of history than most cable and network commentators, Mr. O’Donnell brought up the fact that Dr. King  not only saw the connection between the growing expense of the Vietnam War (in lives, black lives especially, and money) and the dwindling resources for the War on Poverty, but was willing to speak out on it at New York’s Riverside Church on April 4, 1967. One of the reasons I like the old TV miniseries KING is that it includes this important sequence in Dr. King’s life, showing that he was indeed a great prophet willing to walk in the footsteps of such prophets as Jeremiah, who was roundly despised by his fellow Jews for calling his countrymen to task for disobeyting the Covenant laws of mercy and justice. (You can see my review of the film at https://readthespirit.com/visual-parables/category/movie-reviews/) The film has some historical flaws, but all in all, it presents in a dramatic way the major events in his life.
So, as we honor the man whose eloquence virtually everyone now admires, let us also honor the prophet who, exactly a year after he made his costly prophetic speech in New York City, was struck down in Memphis because his mission was to help those who were victims of economic as well as racial oppression–who indeed pointed out that the two were intertwined.