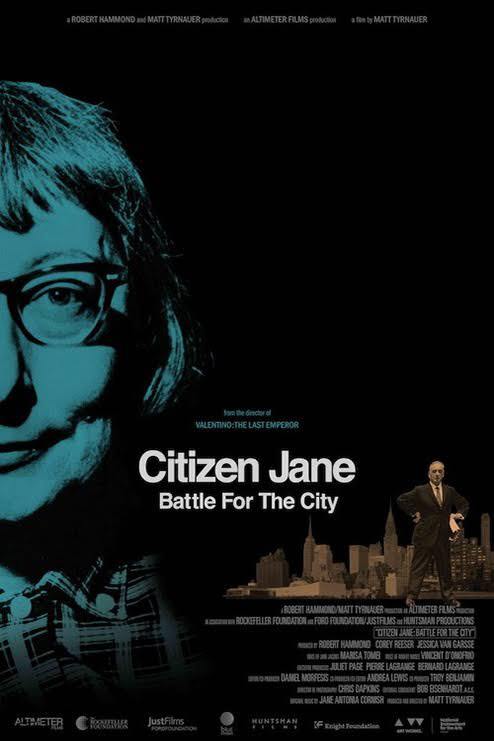 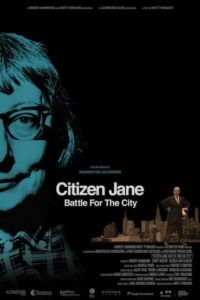 When I still lived in Indianapolis I remember first reading about Robert Moses back in the late 50s in an article about the man in a popular magazine, the writer glowingly describing him as a powerful visionary changing New York City for the better by wiping out its slums. I was especially interested in him because my home town was following his example by destroying whole blocks of buildings to eliminate the old and make way for the new. For many years the “new” consisted of a number of parking lots and large vacant spaces filled with weeds and trash.

Matt Tyrnauer’s fascinating documentary presents an alternate vision of the city espoused by writer-activist Jane Jacobs that is as different from his as day from night. Although the clash between the two took place almost 60 years ago, the impact and ramifications are with us yet, not only in the teeming cities of the USA but all around the world where much larger megacities are arising.

Robert Moses was a wheeler dealer eager to tear down the old buildings packed with people and move them to clean, high-rise projects where he thought they would be safer and more content. Allied with big business and City Hall, he was impressed by the Swiss-French architect and urban planner Le Corbusier. Believing in the automobile as key to modern mobility, he backed super expressways as the best means for moving large numbers of people across the city, disregarding the impact of such massive roadways on the thousands of people they would displace.

Jane Jacobs believed that the people living in older low-rise apartments were happier observing and interacting with neighbors in the streets. Moses saw chaos in the streets, whereas she saw people enjoying each other’s company as they chatted, bought and sold, and played together. Moses viewed the city from the top down, she from the bottom up. With so many people walking, playing, visiting, selling and buying there she thought that the streets would be far safer than in neighborhoods where the people lived in huge hi-rise complexes—as she has subsequently been proven right, the film showing many of the once praised low income, but now abandoned buildings, because they had become crime-ridden, being dynamited.

The two clashed when Moses proposed that the city extend Fifth Avenue further south, which would mean destroying Washington Square Park, its then current southern terminus. Had Moses prevailed, gone would be the dozens of chess players, street musicians, children frolicking, and neighbors chatting in the large plaza dominated by the great arch. (In the late 1960s when I led youth groups on trips to the city, where we lodged at the Washington Square United Methodist church, all of us were delighted by the diversity of activities and of people enjoying themselves there.)

Jane was at first belittled for being “just a housewife.” How could she possibly know more than the most powerful man, other than the mayor, in New York City? But she proved to be an effective organizer, and in 1961 her book The Death and Life of Great American Cities clearly and powerfully argued her views of a city as best served by low rise apartments with lively street life. Later on, New Yorkers would be in her debt when she successfully fought against a huge, costly plan to bisect lower Manhattan with an expressway similar to one in the Bronx that proved a disaster for the urbanites of that borough. Urban renewal planners valued the automobile more than mass transit, automobiles owned largely by suburban dwellers wanting to get in and out of the city fast and in their private capsules.

The film provides a fine history of the war of ideas about what a city should be, as well as a good introduction to Jacobs as an effective activist who proved that one person can make a difference in the world. The film also presents the challenge of leaders today facing global urbanization. The huge towers for poor people abandoned in North America are being built today in cities like Paris and Peiping. The academic Saskia Sassen is quoted as saying, “China today is Moses on steroids.” However, what alternatives do governments have when millions of people flood into cities in search of lives better than the rural semi-starvation existence they are fleeing from? Do the polluted barrios of San Paolo or Johannesburg offer the kind of warm human interaction championed by Jane Jacobs in Manhattan? The film does stops at this point, leaving it to the viewers to deal with such questions.

In this doc. Jane Jacobs stands up against City Hall & titan Robert Moses to save Washington Square & other neighborhoods in Manhattan.
More Details