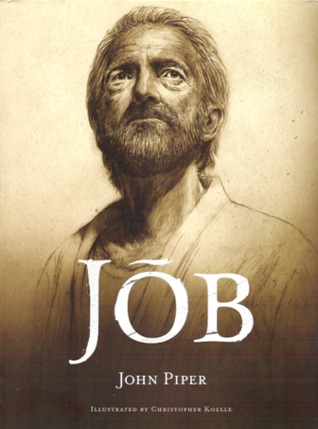 Because the O.T. lessons in the Common Lectionary during the month of October are from the book of Job, we bring you this review of a second version of a film based on Job. Be sure to see the review of The Prophet Job as well.

For I know that my Redeemer lives,
and that at the last he[b] will stand upon the earth;
and after my skin has been thus destroyed,
then in my flesh I shall see God, 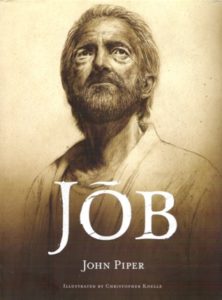 Far shorter than The Prophet Job, the Australian film that uses the texts of Job as its script, preacher/poet John Piper’s film captures the essence of the Biblical book in his poem that features some delightful rhymes. He transforms the original into a Christian book by dividing it into four parts, each of which ends with a long stanza centered on Jesus Christ. He published it originally in 2008 as a 128-page book with vivid illustrations by Chris Koelle. Out of print, the poem is now offered in this new format at a price everyone can afford. The author himself reads the text, and Koelle’s beautiful pictures are brought to life in simple animated form by Danny McKnight. Aaron Greene’s lovely music adds greatly to the drama of the story.

The age-old themes of innocent suffering and the sovereignty and compassion of God are at the heart of the story, with the poet altering the original in various ways. The account of Satan and the heavenly council is dropped, and Job’s wife is given a name—Dinah. Repulsed by the sores that cover his face and body, she does leave him with the admonition to “curse God and die.” However, she returns to him for a reconciling hug, and even massages his boil-covered back later on.

The three friends come and commiserate with Job for several days before they each attempt to get him to confess his secret sins. It is Bildad who demands, “Uncover what is hidden friend/And you will have a happy end.” Job refuses their charge that he is being punished for his sins, the section ending with his faith statement that he knows his Redeemer lives, plus the stanza that consists of a prayer to the “risen Christ” containing a warning against his tormentors’ false theology, “Beware of claims that stand too tall/” The upright stand and wicked fall.” In another place the poet calls this claim a “half-truth,” but when presented as the truth, it becomes a falsehood.

In the fourth section a cured Job talks with the first of his new children, young Jemima. In answer to the little girl’s questions he tells her of his suffering and how God had spoken to him, assuring her of the love of God despite suffering, indeed, that it was through the suffering that he came to such a faith.

Despite its deviations from the Scriptural version, this well-produced video could be used by a religious study group in a series that could also use all or parts of the Australian video of Job. This would take considerable preparation by the leader over a period of six weeks or more. Or, Piper’s video being divided into four parts, just this video could be used. The titles of the four sections are very fitting: Part I: O God, Have Mercy On My; Seed; Part II: That I Should Bear This Pain, Not You; Part III: O Spare Me Now, My Friends, Your Packages of God; and Part IV: Unkindly Has He Kindly Shown Me. Each section is about 10 to 11 minutes long, and so would easily fit into the typical 50 minutes of class time.

For more information on the DVD form go to: http://www.jobthefilm.com/. The film also is available in a down-loadable form at: https://gumroad.com/l/JOBtheFilm/. They even let you name your price! Be generous. I think you’ll agree that this is a valuable addition to Scripture study for exploring the mystery of suffering and God’s grace.

The Biblical story is retold in condensed form by poet John Piper, who connects Job's suffering with that of Christ on the cross.
Editor Rating ★★★★★5 out of 5