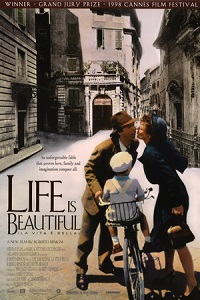 
Reprinted from the December 1998 issue if VP. 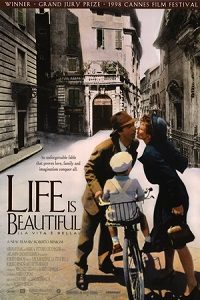 Italian comedian Roberto Benigni has pulled off the seemingly impossible by creating a comic film on the Holocaust that is not offensive. Wherever it has been shown the film has received accolades from Jew and Gentile viewers. The story is told in what amounts to two acts, the first dealing with Guido (Robert Benigni), a Jew, courting the lovely school teacher Dora (Nicoletta Braschi, who in real life is married to Benigni), a Gentile. This is told in Chaplinesque style, with the naive Guido having to contend against a Fascist suitor of Dora’s. We see Mussolini’s visage on wall posters, but life goes on in their village with little intrusion from the government. Guido is successful, in his quest for the hand of Dora and for a license to operate a book store. Jump to five or six years later, with Guido and their little son Giosue’ walking down the street, and we see German soldiers passing by. The child is able to read a shop sign: “No dogs or Jews allowed.” When Giosue’ asks the meaning of the prohibition, Guido replies that it merely expresses the strong dislikes of the shop owner. He asks what animal Giosue’ dislikes the most. “Spiders!” the boy replies. Guido declares that he doesn’t like Visigoths, therefore they will put a sign in his bookshop window “No spiders or Visigoths allowed.” As we will see, this is the pattern the father takes to shield his innocent son from the poisonous reality of anti-Semitism.

The Nazis are soon rounding up the Jews of the village, Guido and Giosue’ among them. When Dora finds out, the distraught woman insists that she be included, although she is not allowed in the same cattle car. Guido tells his frightened son that they have been chosen to go to a special resort for a long vacation, and that all trains are so crowded that people have to stand up to travel. At the work camp he pretends to admire the crowded quarters, and when a Nazi officer comes in, he volunteers to “translate” the rules for the prisoners, even though he does not understand German (luckily for him the German understands no Italian). This is for the benefit, indeed the survival of his little son. The camp rules are, “Don’t ask for snacks;” “Don’t cry;” and “Don’t ask for Mama.” He then explains that points will be given for proper behavior, and taken away for violating the rules. The grand prize, the father declares, is a new tank. As the days pass Guido manages to hide his son in their top bunk while he is marched off to work. He gives the boy most of his food and entertains him with stories and fantasies of their supposed good life.

The film takes a certain amount of suspension of belief, but all in all it is a wonderful parable of the power of imagination and love confronting unspeakable evil. Little of the horror of the prison camp is graphically shown, except for one brief scene in which Guido comes upon an immense pile of skeletal bodies, reminding him of the purpose of the buildings with the tall smokestacks. The ending of the film, with its costly sacrifice, will tear at the heart, and the wonderful way in which Guido’s promise that he who wins the “resort” contest will be awarded a tank comes true for the boy is a joy to behold.

A wonderful film based on the premise that true love will involve sacrifice and that it’s power, joined with imagination and humor, can uplift and empower the human spirit to endure almost anything.         1

After wooing Dora & siring a son with her, Guido goes all out to protect the little boy from reality when all are sent to a Nazi camp.
Editor Rating ★★★★★5 out of 5
More Details