Whoever does not take up the cross and follow me is not worthy of me.

Those who find their life will lose it, and those who lose their life for my sake will find it.

“From now on, therefore, we regard no one from a human point of view…

So if anyone is in Christ, there is a new creation..”

This film, with two major stars, was not promoted much by a studio that apparently could not get a “handle” on it. It is such a quiet gentle film, until the climax — no horror or steamy sex scenes, no car chases or shoot-outs or exploding special effects. Just two women facing an important decision and the impact it has on their lives and those of their families. Whoopi Goldberg, as the “colored” maid Odessa working for a white Southern family, gives a performance equal to her excellent work in THE COLOR PURPLE or SARAFINA. And Sissy Spacek as the obedient housewife Miriam, whose better instincts lead her to sympathize with and then throw in her lot with her maid during the  Montgomery Bus Boycott, provides a fine, restrained performance that never threatens to undercut Ms. Goldberg’s.

When Thurgood Marshall and the NAACP won their Supreme Court case that outlawed school segregation in 1954, the winds of change began to blow through the United States, especially the Southern states where racism was built into the law as well as being a part of social custom (as in the North). They became a virtual hurricane in Montgomery, Alabama, when a tired Rosa Parks refused to give up her seat in the mid-section of a bus and was arrested. The black community, led by its ministers, decided that they had had enough. They elected to walk with dignity rather than to ride in shame. Odessa and her husband have to make that decision, also. When they do, Odessa finds that it will have a deep impact on their children and even on her employer.

This film, then, is about facing decisions and shouldering their consequences, consequences that we cannot even think of when we first make the choice. It is also about the freedom, the liberation that comes from accepting and living with a decision that is based on a concern for dignity and respect. 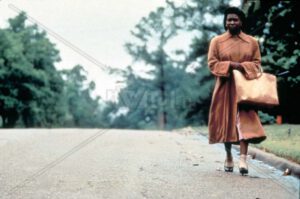 For Reflection and Discussion

1. Describe your favorite or most memorable scene in the film. What elements contributed to this: the acting; the script writing; the music or sound; special camera work or lighting; the directing?

2. Recall the times of the Montgomery Bus Boycott:

– Who was the President of the U.S. then? Head of the Soviet Union?

– What Supreme Court decision was causing such controversy?

-What were the popular songs and movies then?

-What was the “proper place” for women then?

3. What are the two families — the Carters and the Thompsons — like? Compare Herbert Carter with Norman Thompson; Odessa with Miriam.

4. What signs of the American caste system do you see in the film? How is this reflected in the park incident with the policeman? Why do you think that Herbert is not very impressed when Odessa tells him of Miriam’s reaction to the incident?

4. How did you feel about the Thompson family’s Christmas table dinner conversation? (Several southern blacks once told me how such white families expressed openly their racist views and exploits, as if the servants were but pieces of furniture.)

5. What does Miriam’s story of the swimming pool incident in Oregon reveal about her? At what point in her relationship with Odessa does the white woman begin to look at her as a human being and not a tool or appliance to make her life more comfortable?

6. Describe the three important forces that are shown in the film: the family; the church; the local social mores. How do these affect the various characters in different ways? How do they support each other? Conflict?

7. Especially important for the Carters is the role of the church. How did the black church differ from the white church (and still does?)? (A re-reading of Martin Luther King, Jr.’s “A Letter From a Birmingham Jail” might be in order here.)

8. We never see Dr. King, but we hear parts of his sermons. What influence does he have on the characters, especially on the boy Theodore Carter? Note the close-up of his hands in the scene in which he is accosted by the white toughs: what keeps him from fighting back? What was Dr. King’s teaching on non-violence? Was it a tactic, as with many C-R leaders, or a way of life? Check out Matthew 5:38-48 and Romans 12 for the source of this belief.

9, Odessa tells Miriam in the car, after having driven by the parking lot where drivers pick up and discharge boycotters, that if she crosses over the line, she can never return. How is this borne out in the story? How is what happens the cross that Jesus talked about in Matt. 10:38?

10. What signs of “the beloved community” do you see in the film? What forces oppose its coming? Are the latter much different from those that opposed Jesus’ proclamation of the coming of the kingdom?

11. Was racism a part of your conditioning when you were a child? What made you question it? Do you still find it lurking in the recesses of your mind? For some it was a conversion to Christ or a slow, growing awareness of the implications of his teachings that rescued us from racism. Look again at Paul’s words in 2 Cor. 5:16, as he describes his own transformation from a “human point of view” (racism which makes humans that are different into things) to a “new creation in Christ.”

12. The story takes place almost fifty years ago. Have relations between the races changed much in that time? What has been gained; lost? What efforts to overcome racism do you see in your community? In your church?

The impact of the Montgomery Bus Boycott is depicted through the experience of Odessa, a maid who works across town for a white family. Her influence on the wife upends her employers' family.
Editor Rating ★★★★★5 out of 5
More Details