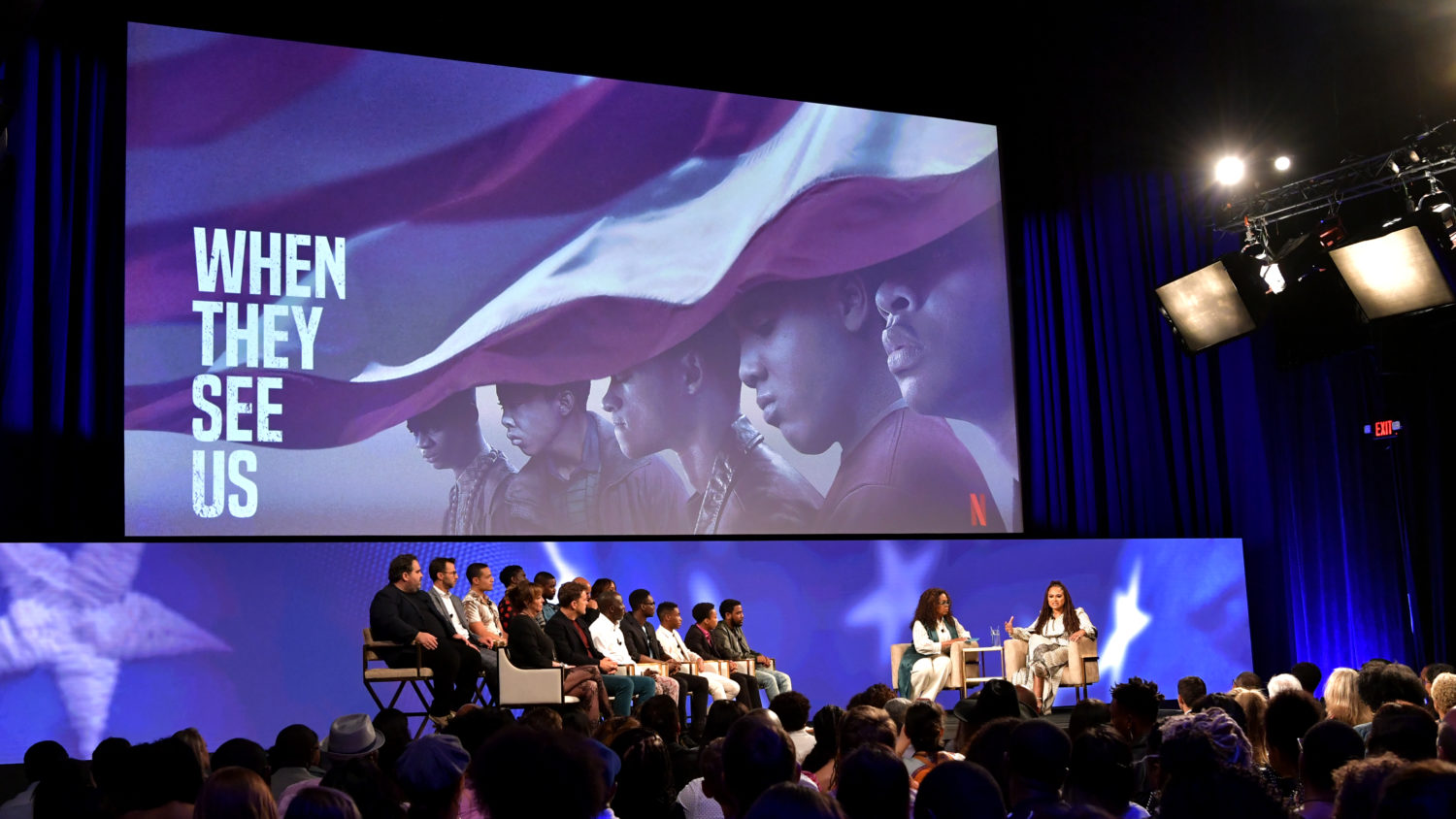 The link to this program popped up at the end of Episode 4 of the Netflix mini-series When They See Us Now. Having been mesmerized by Ava DuVerny’s film and wanting to know more about it, I had to see this. It was taped before a large audience on June 9 and aired on Opra’s network OWN on Wednesday, June 12. I’m grateful that Netflix is making it available to an even larger audience.

The first part of the program is devoted to director/writer Ava DuVernay and the major members of her talented cast who played the real life characters. The director reveals that she insisted that the original title of The Central Park Five be changed because she wanted to show that they were not the anonymous numbers tarred by the police and media as animals, but humans. The way in which they are looked upon is important, hence the new title. Each of the actors describe how getting to talk with their real life counterparts was crucial in depicting their pain and suffering. This personal contact, the actors say, helped them find “the voice” of the character.

As moving as the first part is, the high point is Opra’s interview with what Ms. DuVernay, wanting to erase the more negative label of “The Central Park Five,” calls “The Exonerated Five”– Yusef Salaam, Antron McCray, Raymond Santana, Kevin Richardson, and Korey Wise. We see that they still make up a fellowship of suffering, even though they have moved on with their lives. All but one have left New York City—to Georgia and New Jersey—and the four who were sentenced as juveniles agree that Korey, tried and sentenced as an adult despite being 16 at the time, suffered the most. Thus they had insisted that the film makers should take more time to tell his story, which she did, his ordeal in several state prisons dominating Part 4 of the mini-series.

Four of the five have moved on more successfully—all five have married and sired children—than Antron McCray. Many times as he tells his story that includes not only the police but his father urging him to sign the false confession, his suffering emerges amidst his tears. Unlike in the film wherein father and son are reconciled at the broken man’s deathbed, Antron says he still has not forgiven. “I hate him,” he confesses through his tears.

Although they do not label it hate, they still have strong feelings toward their persecutors, Raymond Santana singling out lead prosecutor Linda Fairstein, whose publishing deal (she has penned several detective novels) has been canceled. “She had the power in her hand to really do the right thing, and she fumbled it,” he declares. In addition to her refusal to admit any wrong doing during their long interrogation, mention is made of the NY Times $85,000 full page ad taken out by then businessman Donald Trump demanding that the death penalty be reinstated so that the rapists would meet their just punishment. He has not retracted it, siding with Ms. Fairstein by denying the DNA evidence that proved the young men were innocent.

Except for the man deeply hurt by his father, “The Exonerated Five” seem to be getting on well with the lives. For those wanting more of “how are they doing” than providing by the end titles of the end titles, this upbeat hour is a satisfying bonus.

Just as I was getting ready to post this on a Saturday morning I read Dorian Lynskey’s relevant story on my BBC app , aptly entitled “Fight the Power: The Most Provocative Song Ever.” Because I had neglected to comment on the soundtrack in my review of the mini-series, I want to bring this to your attention now. Ms. DuVernay’s film opens with this song playing as the boys enter Central Park on that fateful night. The song was originally written by Chuck D of Public Enemy after Spike Lee asked him in 1988 to write an anthem for his film Do the Right Thing. According to Mr. Lynskey, Lee wanted the writer to update James Weldon John’s “Lift Every Voice and Sing,” a song that since its inception in 1921 has been sung by millions of African American church goers who regarded it as “The Negro National Anthem.”

Chuck asked the film maker to listen to the streets, telling him that that was not the kind of music blacks were playing on their radios. Lee, true to the title of his film, then let the writer pen his hip hop anthem that, along with the film, became popular not only in this country, but all over the world.

For a graphically exciting version of this song see Tony Wilson’s version on YouTube. The wonderfully edited collection of graphics that accompany the song, including memes decrying racism and urging love (a black man whose shirt read “Free Hugs” embraces a cop!), shows dozens of mass demonstrations and marches that illustrate “the power of the people.” To see the full power of the lyrics go to the Genius website: the song’s 3rd verse being especially powerful.

For discussion questions go to my review of When They See Us .

Opra Winfrey interviews the cast and the 5 falsely accused 'Central Park Five' in this cable documentary about the miniseries When They See Us.
More Details