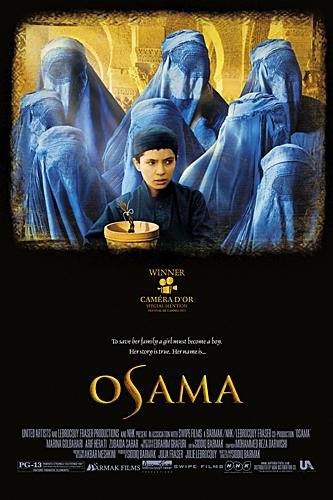 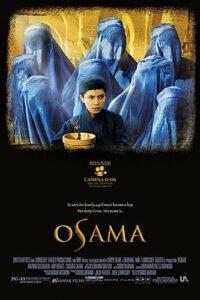 Siddiq Barmak is one of those Middle astern filmmakers who hold up the horor of fanaticism, often at great risk to themselves (some have been imprisoned). His film transports us back to the five-year period when the Taliban misruled Afghanistan, throwing its citizens, especially the women, back to the age of barbarism. We never learn Osama’s (Marina Golbahari) real name, nor that of her Mother (Zubaida Sahar) and Grandmother (Hamida Refah), possibly a deliberate device of the writer to remind us that they are Everywoman. During that period it was the law that women were not permitted to hold jobs or to go out into the streets unless a man accompanied them. This was no light matter: a woman who violated it could be sentenced to death by stoning.

The men in Osama’s family have perished in war, so the women can starve, risk death, or depend on relatives to bring them food. No one does the latter, so Mother, apparently a doctor, secures a male relative of a patient at the clinic where she works to go with her to treat the old man. Unfortunately, he dies, and the relative will no longer go with her to treat other patients. In despair she laments that she wish she had given birth to a son. This is not a put-down of her daughter, just a statement of their desperate plight. Then it is that Grandmother tells her granddaughter that she is a person of worth and dignity, and suggests a plan. Disguise the child as a boy and send her out to work. Osama objects, scared to death because of the risk, but as Mother cuts her hair, Grandmother tells her the story of a boy who had wished to be a girl, apparently to bolster her spirit.

This is not a story of courage. Osama repeatedly objects to and cries over her plight. She would rather skip rope, but goes dutifully to work, after her mother persuades a kindly shopkeeper, a comrade in arms of her dead husband, to take her on at his shop. Espandi (Arif Herati), a beggar boy, sees through her disguise and tries to shake her down for a payment. However, when she fails to offer anything, he becomes an ally, coaching her in how to act as a boy. When the two are rounded up by the Taliban to go to a school for indoctrination and eventual enrollment in the army, Espandi continues to champion her when the other boys, recognizing that Osama is “different,” cruelly taunting and abusing her. Of course, it is only a matter of time before the girl is found out, and we soon see what amounts to justice in a Taliban open-air court.

Siddiq Barmak’s film is one of those that transport us to an alien land and culture and makes us feel the horrible indignities inflicted upon women. The film opens with a scene of women in blue burkhas marching in Kabul to ask for changes in the laws so that they can work and go out freely. Soon the Taliban soldiers are training huge streams of water on them, knocking them down— calling to  mind Bull Connor’s harsh treatment of the blacks in Birmingham during the difficult days of the Civil Rights Movement. Only here the water is quickly followed by bullets. Later, a wedding celebration by a group of women is quickly transformed into a funeral lament when a spotter calls to them that a Taliban is patrolling their area.

We should be grateful that United Artists took on the distribution of this fine film. It is a reminder, along with films such as A Handmaiden’s Tale (cruel fanaticism knows no creedal boundary!), that the price of fanaticism is too high to ignore it. I can remember the time many years ago when my wife struck against the prevalent patriarchalism of our culture by removing from our middle daughter’s hands a toy nurses kit and replacing it with one intended for boys, a doctor’s kit, telling her that she had the ability to assume a man’s role if she wanted to—how tame this now seems in comparison to what Osama and her millions of sisters endure. The cry of the Psalmist over unjust treatment might well be that of Osama and her mother!

During the Taliban's rule thee women in Afghanistan facing starvation with their men dead, disguise one as a man so she can work outside the home.
More Details