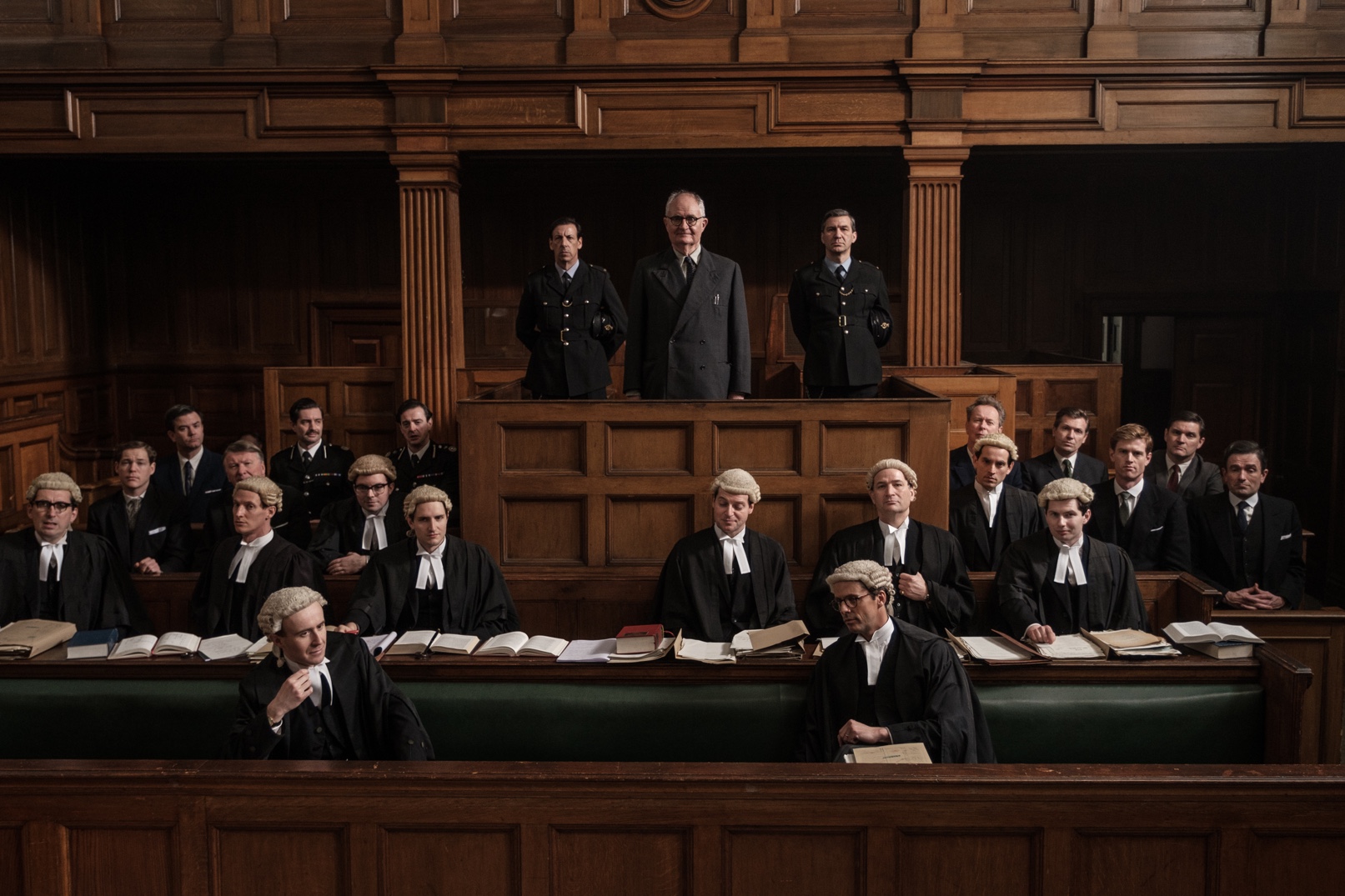 Speak out for those who cannot speak,
for the rights of all the destitute

The late British veteran director Roger Michell makes the most of the script by Richard Bean and Clive Coleman, “based on a true story” that took place in 1961. This film, part heist, part family relationship, coping with sorrow, and concluding as a courtroom drama, is about a feisty social justice advocate who leads a feckless campaign against the British government over the television license fee that every Brit had to pay to watch TV. But before we learn this, the film actually opens with Kempton Bunton in court pleading “Not Guilty” to charges of stealing Goya’s valuable “Portrait of the Duke of Wellington” from London‘s National Gallery. Then, before depicting the trial itself, the film flashes back to six months earlier.

Jim Broadbent’s sixty-year-old self-educated Kempton Bunton is one of those sign-caring protestors often seen in public parks and such. He lives in New Castle and has been a one-man campaign against the government’s scheme to finance the BBC, the television tax that everyone watching television must pay. The government agents constantly patrolling neighborhoods with a device that detects unlicensed TVs have been knocking on his door—and, indeed, he has served thirteen days in jail when caught. He himself can afford to pay, but his beef is that pensioners living on tiny incomes are not exempted from the fee, which he thinks is unfair. His concern for the impoverished also cost him his job as a taxi driver—he had given a free ride to an impoverished World War One veteran. Kempton also writes plays and scripts that no one wants to produce.

Kempton’s relationship with his wife Dorothy (Helen Mirren) is strained—partly due to his eccentric campaign and fruitless attempts at writing, but as we learn near the beginning of the film, also due to the death of their daughter Marion. At the age of 18 she was riding a bicycle when a car struck and killed her. Apparently neither parent has gotten over their sorrow, especially Dorothy, unwilling even to talk about their loss. She is quite upset when one of his scripts is centered on the death of the girl. The couple do have two sons, Jackie (Fionn Whitehead), who dreams of designing boats, and Kennie (Jack Bandeira ), the latter living in Leeds and who is in and out of trouble with the law.

Whereas most heist films go into detail on the careful planning and the execution of the theft, this film jumps over the planning and in just a couple of minutes shows the robbery but does not show the face of the thief. He easily climbs through the Gallery’s bathroom window which he earlier had left unlatched, this during the short time when the elaborate security apparatus is shut down so that the cleaning staff can do their work. Kempton had come to London to try to bring his campaign to the attention of Parliament and to interest the BBC in his scripts.

Back in Newcastle, he and Jackie hide the painting in the back of a wardrobe. He sends the government ransom notes demanding that £140,000 be set aside for the aid of retired people. However, Scotland Yard believes that only a professional art thief could have obtained the painting, so the detectives at first ignore the notes. What follows, especially the part about the return of the portrait, the identity of the thief, and the widely publicized trial, would seem like a farce, were it not all true. (For a good background of the story with details supplied by the grandson of Kempton see this article in  The Los Angeles Times.)

This is a delightful story of a little man standing up for those “who cannot speak” (pensioners). Jim Broadbent beautifully slips into the character of a quirky character unafraid to speak out. Helen Mirren’s part is not as large because, as the Los Angeles Time’s article points out, little is known about her, but the gifted actress makes the most of the role of a wife who is both exasperated by and in love with a husband she will never understand. Ms. Mirren is the one, as quoted by the Times, who sums up well the point of the film:

“The myth of David and Goliath is an eternal myth and one that we all identify with. The man standing in front of the tank in Tiananmen Square or [Volodymyr] Zelensky right now in the Ukraine. That man or woman who stands up against a power. I think we all feel like that in a way — we all feel that we’re a small person fighting against forces that we can’t control.”

At a time when most films are aimed at a sixth-grade level audience we should be thankful for this film about a mature couple involved in a scarcely believable story of concern for others. The filmmakers even show the now reconciled couple sitting contentedly together in a movie theater watching the 1962 James Bond movie Dr. No. They, and we, laugh at the scene in which the famous portrait is displayed in Dr. No’s den as if he had stolen the work. And the courtroom sequence is greatly enhanced by Matthew Goode playing the clever lawyer Jeremy Hutchinson whose artful examination of Kempton finds a loophole in the law that is convincing to the jury. Don’t miss this intriguing true tale of a modern day Robin Hood who is far more interesting than the original denizen of Sherwood Forest.

A feisty working class Brit opposed to the TV license fee stands trial for the theft of Goya's "Portrait of the Duke of Wellington."
Editor Rating ★★★★★4.5 out of 5
More Details