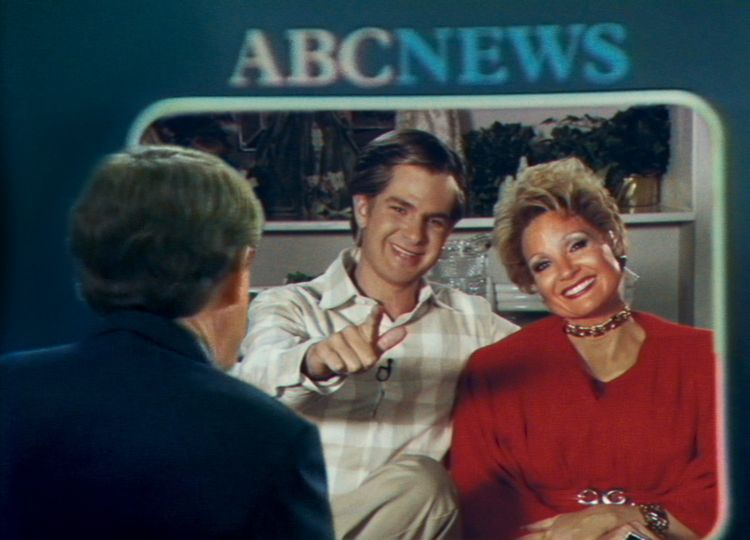 You shall not take vengeance or bear any grudge against the sons of your own people, but you shall love your neighbor as yourself: I am the Lord.

Director Michael Showalter and writer Abe Sylvia’s biographical film about the singing televangelist might surprise some viewers. It certainly did me, to learn that such an iconic evangelist espoused the cause of members of the LGBTQ community, even standing up against such rabid haters as Jerry Falwell.

Serving as a prologue, shots of various newscasters reporting on the Bakkers’ scandals are heard as the front credits roll, and then the camera switches to an extreme close-up of Tammy Faye Bakker’s (Jessica Chastain) extremely made-up eyes. Commenting on her prominent eyelashes, she says, “They are my trademark.”

Jump back a few decades to young Tammy’s childhood (played by Chandler Head) in International Falls Minnesota by her ultra-conservative mother Rachel LaValley (Cherry Jones). The pious woman felt her daughter was too impure to attend her church, so we see the little girl peering through the window at the congregants singing inside. Showing the strong will that she will display throughout her life, the girl one day enters the church and walks to the front where the pastor is fervently preaching his gospel of repentance. The girl accepts Christ as her savior, and then, before her mother can intervene, Tammy collapses in a paroxysm of speaking in tongues.

Years later, in 1960, Tammy is enrolled in a Bible college where she is taken with the young Jim Bakker (Andrew Garfield) who is giving a student sermon in homiletics class. The young man asserts that Jesus does not just promise us rewards in heaven, but that he wants us to be prosperous now. When the professor criticizes the student, Tammy stands up and defends him. Turning to her, the professor puts her down by condemning her make-up, even obliquely calling her a harlot. Jim, obviously taken by his admirer, quotes from The Song of Solomon. The pair become an item on campus, soon showing up at her home to inform her disapproving mother that they are married.

The story moves on to their early days as traveling evangelists, Jim doing the preaching of his version of the prosperity gospel and Tammy drawing in the children with her puppet presentations. During a stay in a Virginia motel Tammy takes note of a young evangelist preaching via TV. This is followed by the shock that their car is gone, repossessed by the finance company. However, they are rescued by a man who had been impressed by their preaching. He invites them to the TV station where he works to meet the evangelist she had seen on their motel TV set, Pat Robertson (Gabriel Olds). They become a part of his show, and then launch together “The PTL Club,” this leading to their skyrocketing success with its attendant luxurious lifestyle. They might claim to be as devoted to Jesus as anyone, but neither of them is a Francis of Assisi. No simplicity for these lovers of lavish clothes, big mansions, and glitzy show business style of programming.

It is at Pat Robert’s palatial home in 1971 that the Bakkers meet Jerry Falwell (Vincent D’Onofrio). He enters the grounds like a king, attended by his minions. He condescendingly calls them “the puppet people.”  Tammy is holding her infant daughter as she circulates among the crowd. Jim joins Falwell, Robertson and other male advisers at a table to discuss plans for their ministry. When Tammy walks up to the table, the demeanor of the men should have signaled to her that she, a mere woman, had no place there. She ignores this and pulls up a chair to join them.

Falwell is not pleased at her bold move, so when she calls him “Jerry,” he corrects her by insisting that she address him as “Reverend Falwell!” He rants about defending the nation against evil forces, singling out homosexuals. Tammy responds with “I don’t think of them as homosexuals. I just think of them as human beings that I love. You know, they’re made out of the same dirt, and God didn’t make any junk.”

Tammy will preach this love of God trumping human hatred throughout her career. On her show she will interview HIV/AIDS activist Steve Pieters (Randy Havens), giving him a platform to share his experience that went against the evangelical teaching that homosexuality was a matter of choice and thus a sin. Good ole Jerry Falwell is backstage during the interview and is very upset that she would so break ranks and align herself with such a person. Earlier in the film, in an exchange with her intolerant mother, Tammy Faye had spoken against her claim that “God’s love is limited.” Clearly Tammy Faye, throughout her life was more influenced by the love passages in the Scriptures than the judgmental ones preferred by her mother and Jerry Falwell.

But, as the film shows in its latter half, Tammy Faye was no stained-glass saint. Apparently dissatisfied with Jim’s consummation in career and his show, she momentarily turns to the winsome producer Gary Paxton (Mark Wystrach),  for comfort and support. This brief affair provides Jim with justification for his own sordid affair with his secretary Jessica Hahn, which in turn led to charges of sexual misconduct necessitating his resigning from the network the two had parlayed into an empire, including the theme park Heritage Village. Added to this were charges against Jim of misusing the huge funds they had raised (faithful viewers were contributing up to $1 million a week). Jim was convicted and spent time in a federal prison. The film is very sketchy on the scandals as well as Tammy Faye’s resorting to drugs to cope with the chaos of their lives. During the onset of the scandals she stood by Jim, but when he was sent to prison, she divorced him. She married the developer of their Heritage Village, Roe Messner (Sam Jaeger), and was active in her ministry until her death from colon cancer in 2007.

Some critics have been harsh in their criticism of the script but virtually unanimous in their praise of Jessica Chastain’s portrayal of the televangelist. The actress does virtually disappear into the glitz and cosmetic enhanced glamor of the woman. Although we may wish that more details had been included (was Jim’s secretary Jessica Hahn even mentioned?), there are enough for us to appreciate her as a stand-out amongst the judgmental evangelists who shaped our culture and politics. I especially like the film for two reasons:

-The depiction of her intolerant mother Rachel, played by my favorite character actress Cherry Jones. Although Tammy rightly countered her mother’s limited view of God, Rachel does provide a needed critique of the Bakker’s ostentatious lifestyle. Several times she serves as her daughter’s conscience, such as in the scene in which she is reluctant to accept her daughter’s gift of a fur coat. She questions her daughter’s choices, her clothes and house being as glitzy off-stage as on her TV show. If Tammy ever read Jesus’ calling such things into question in Matthew 6, she never gave any indication of taking it seriously. Unfortunately, she did not stand out from her fellow televangelists in respect to accepting outrageous luxuries as their due. Gold-plated bathroom fixtures indeed!

-As mentioned above, the film dramatically shows that she did stand apart from fellow televangelists in preaching the gracious love of God. She lived out the words of the popular hymn, “Amazing grace/how sweet the sound…” The compassion she showed gay minister Steve Pieters while Jerry Falwell stews behind the curtain might remind people of faith of the contrast between Jesus and his enemies as he went about ministering lovingly to “sinners,” despite their criticism.

Although it may not be as nuanced as some prefer,  the film does depict her as a more complex than did the media coverage. This is a film not to be missed!

The story of the one televangelist, from childhood to demise, who lived a glitzy life but stood up & embraced gays during the AIDS crisis.
Editor Rating ★★★★★4 out of 5
More Details