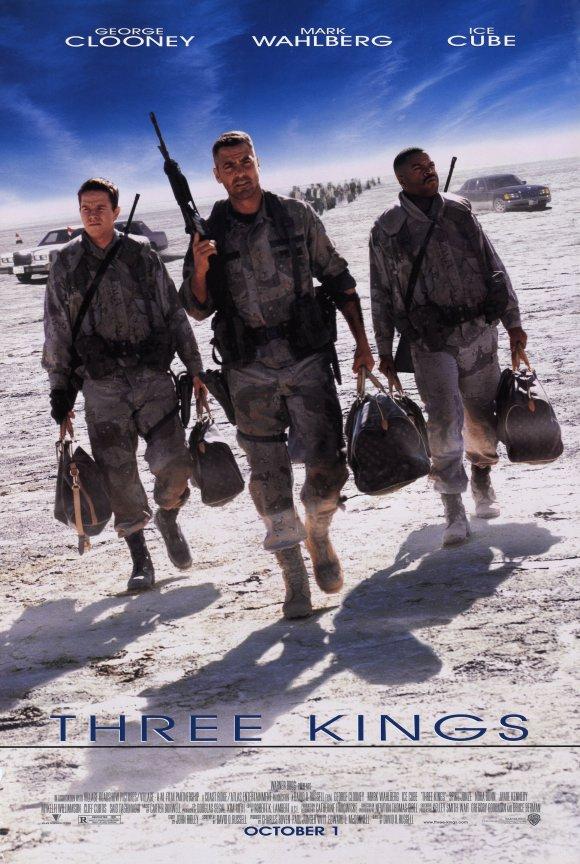 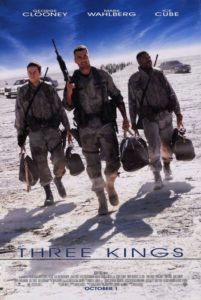 No, the three kings of the title are not those associated with the birth of Christ. Actually, in the film there are four—U.S. soldiers—who will become as rich as kings if they get away with their scheme to steal some gold that Saddam Hussein’s forces have stolen from the Kuwaitis. It is March, 1991, and Special Forces Archie Gates (George Clooney) has learned that a treasure map has been found by some soldiers of lower rank. He takes charge, and the little band of four set out to find the gold. Along the way, after a series of adventures, some comical, others tragic, they discover something far more precious, that they are capable of compassion and risking for others less fortunate.

They find not only gold but a group of Iraqi rebels and their families hard beset by Saddam’s soldiers. U.S. government policy had encouraged them to rise up against the dictator, but had now abandoned them when official policy declared that Hussein is “defeated” and the war is over. The four men have to decide whether to take the gold and run, or whether to go against orders and help the refugees to escape over the border. Thus what could have been a routine action thriller becomes a film with heart, with more than a touch of social commentary. The latter includes a charge against America by an Iraqi that America is so racist that it caused Michael Jackson to want to change his skin to white.

During a torture session the Iraqi movingly tells his prisoner of how his son was killed and his wife’s legs were crushed by an American bomb, which causes the G.I. to think of his own little daughter.

Another encouraging touch: the one soldier portrayed as a Christian is not the usual Hollywood stereotype kill-joy or hypocrite: Staff Sgt. Chief Elgin (Ice Cube) says that he tries to do whatever Jesus puts in front of him.

Although this action movie does not condone violence, the scenes of mayhem might be too much for some violence. In a graphic attempt to show what a bullet does to the human body, several shots of bullets entering a person are shown, the camera taking us inside the body so that we can see the organs being invaded and destroyed by the projectile. Not a pretty sight!

During the Iraq war three G.I.s discover a cache of gold & must decide whether to help some refugees escape to safety or leave with the gold.
Editor Rating ★★★★★5 out of 5
More Details