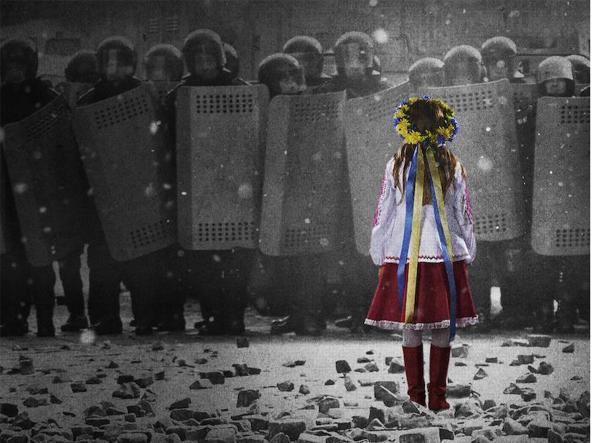 Do you indeed decree what is right, you gods?
Do you judge people fairly?
No, in your hearts you devise wrongs;
your hands deal out violence on earth.

The wicked go astray from the womb;
they err from their birth, speaking lies.

I hope that freedom-loving people all over the world will tune in to Netflix’s new documentary Winter on Fire: Ukraine’s Fight for Freedom. An Oscar nominee for “Best Documentary,” it provides a fitting prelude to the current violence unleashed by the ruthless land-grabbing Russian tyrant, as well as a fitting tribute to the brave people opposing him. I wonder if the Kremlin murderer had been able to see this documentary, would he have so underestimated this incredibly courageous people who, after shedding their blood in defense of their freedom eight years ago, are now united to shed it again?

Evgeny Afineevsky, a Russian-Israeli filmmaker working in Los Angeles, has assembled a documentary as gripping as all the Marvel superhero films put together. Only his superheroes are ordinary citizens rising to extraordinary heights of courage and devotion to freedom. The director led a crew of dozens of cameramen who risked life and limb to capture, often up close, the protestors against what they considered Ukrainian president Viktor Yanukovych’s betrayal in Kiev’s Maidan Square for 93 days during the winter of 2013 and early 2014. Paired with current images coming out of the nation’s ravaged cities, they convey a sense of united purpose of a people intent on freedom. I often thought while watching the scenes of defiance and brutal attacks on unarmed protestors what it might have been like had there been film documentarians during our own prolonged revolution against the British.

The film is divided into at least 93 short sections, one for each of the days of the revolution, beginning with a crowd of around 2000 who met in Kiev’s central square, which gave its name to The Maidan Revolution. Viktor Yanukovych had claimed to be in favor of an economic treaty with the European Union, in accordance with the wishes of the majority of his people who wanted to be European, rather than Russian. When pressured by Putin, he reneged and secretly forged ties with the Russian dictator, the protests began, growing in size and zeal with each passing day. “Ukraine is part of Europe,” the throng chanted as they waved Ukrainian and EU flags. They referred to their president as “Convict Yanukovych.”

During the first week a party-like, atmosphere prevailed, everyone filled with optimism. This turned to frustration when their demands were ignored, and Yanukovych unleashed his vicious special police forces known as Berkut. Although international media provided little coverage at first, the protestors’ use of the social media garnered the attention of patriots all over the Ukraine, who journeyed to Maidan Square to join what became a revolution. One activist reports on opening his laptop and seeing the call to come to the square on FaceBook, and that he did not open it again until a month later.

As the Berkut upped the level of violence, the government hired thugs called Titushky to follow the cops and continue their beatings. Some of the scenes are difficult to watch, the Berkut knocking down protestors and then surrounding the fallen victims and beating them mercilessly. One protestor informs us that the Berkut’s usual plastic staffs were replaced by iron ones. The film also catches masked men, one of them trying to conceal a brick held behind his back, who were provocateurs, planted by the government to incite violence. One of the ac tivists recognizes this and shouts to the crowd that they must try to win over the police, not to use violence in their resistance. Similar pleas are made throughout the film, the leaders following the dictates of Gandhi who always insisted that the only way to destroy our enemies is to befriend them. Often we hear the demonstrators plead, “Police with the people!”

There is an enormous amount of bright red blood shown. One wrenching scene shows a protestor being shot dead while attempting to retrieve a wounded comrade. He becomes a martyr to the protestors, the image of his face reproduced on posters and shields as the revolution continues. The oppressors resort to using rubber bullets, tear gas, as well as stun grenades, but the protestors persist. The black helmeted Berkut, their bodies encased in armor, resemble those seen by soldiers in dystopian science fiction thrillers. The sadistic Berkut have no qualms attacking the Red Cross centers or shooting individuals coming to the aid of the fallen, as mentioned above.

Afineevsky interviewed a variety of witnesses, including student activists, journalists, laborers, singers and actors, businessmen, lawyers and medical staff, ex-soldiers and reservists, and clergy of all three Abrahamic faiths. By inserting these interviews throughout the film he helps us see the overarching narrative and also catch a glimpse of the individuals who made up the throng. Said Ismagilov, identified as the Mufti of Religious Administration Muslims of Ukraine, appears several times: he states that people of all ( and no) faiths were joined together, their differences set aside in their in fight against their oppressors. 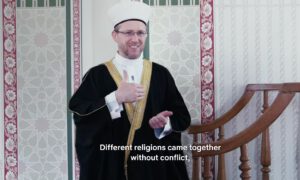 Also engaging is a 12-year-old street kid who joins the fray, eventually fashioning a helmet and body armor for protection. (One delightful section featuring Ukrainians of all ages and genders is when everyone dons pots, pans, skillets, buckets, and other utensils in response to the Yanukovych Parliament’s law that bans citizens from wearing helmets to protective themselves from the Berkuts’ deadly iron staffs!)

The uphill battle against the massive Berkut hordes tilts in favor of the protestors when their military members train them how best to resist a police attack, and they organize into individuals units. The people build massive street barricades able to stand against the onslaught of the Berkut, these scenes calling to mind the barricades and street demonstrations in Les Misérables. The overhead shot in which the huge crow successively withstands and overcomes the hitherto successful push of the Berkut is awesome—truly a sea of humanity.

Eventually the people’s persistence is victorious, with Yanukovych realizing he cannot win, and thus slinking off to join his crony in Moscow. However, the people’s victory is not total. Putin taking advantage of the chaos, engineers a take over of Crimea and sends in troops, minus their insignia, to seize parts of Eastern Ukraine.

The cry of the Psalmist could well be directed at Putin and his puppet. Vs. 2 and 3 certainly described what they have been doing since 2014. The film revels in the fruits of victory, though the sobering end notes remind us that 125 Ukrainians died during those 93 days, and hundreds were wounded. God only knows how many are currently perishing!

Religious faith was an important part of the people’s motivation in resisting tyranny. Several Orthodox clergy speak in support of the people, and we see many clergymen participating in the demonstrations. An elderly woman holds up a small icon of Mary and Jesus, and the large golden-domed St. Michael’s Monastery provides a haven, as well as food and a medical center within its spacious grounds. The people would have taken to heart Psalm 58, though I hope not its concluding words of bloody vengeance. 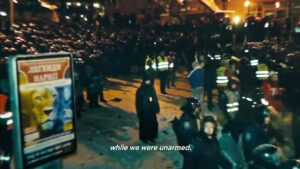 This is a film filled with vivid images that is truly “history written in lightning.” However, for me the film’s message, and the hope, is that such a generation of freedom fighters are still standing up to what seems to be the overwhelming power of tyranny. As I wrote that last line, the little sung-words of the fourth stanza of our own National Anthem came to mind:

“Oh! Thus be it ever, when freemen shall stand,
Between their loved homes and the war’s desolation…”

Never mind the sexist language. Just think upon what Evgeny Afineevsky has shown us in his powerful film.

You owe it to yourself to watch and discuss this, even as each day you see on the news that the revolution for freedom that began in 2013 today is in terrible danger. May one day we be able to sing also that that blue and yellow banner also “in triumph doth wave,/O’er the land of the free and the home of the brave.”

The incredible courage & persistence of the Ukrainians in resisting tyranny in their Maidan Revolution of 2013-14 is graphically depicted.
Editor Rating ★★★★★5 out of 5
More Details