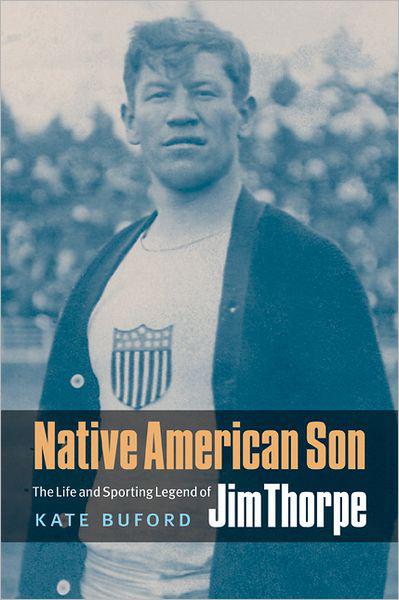 Click on the book cover to visit its Amazon page.FRIDAY, JUNE 22—to JULY 27: The U.S. Track and Field Trials, on June 22, held the first celebration of this year’s centennial of the decathlon, the event that traditionally identifies “The World’s Greatest Athlete.” But, the event’s history will be highlighted all the way through the 2012 Summer Summer Olympics in London, starting July 27.

What is our interest in promoting this sporting milestone? We hope that many of our readers will take this occasion to remember and honor Jim Thorpe, the first decathlon gold medalist. After a century, his story seems to be fading from American culture—even though his biography includes so many fascinating milestones in American history. He was coached by “Pop Warner,” who lent his name to Pop Warner Little Scholars, a sports-and-academics nonprofit that currently involves more than 400,000 kids. Thorpe graduated from the infamously abusive Carlysle Indian Industrial School. He played a wide range of sports, including professional baseball, football and basketball. However, the legacy of racism against Indians and his own alcoholism led to a tragic demise and death in 1953. Nevertheless, today his legacy is widely celebrated among native peoples. His story is featured in the National Museum of the American Indian at the Smithsonian.

For further reading on Thorpe, we recommend: Native American Son: The Life and Sporting Legend of Jim Thorpe

, by Kate Buford, who also wrote a biography of Burt Lancaster. This is the most complete, definitive biography of Thorpe. ReadTheSpirit Editor David Crumm purchsed his copy of the book at the Smithsonian, where it is recommended. Some online reviewers have complained that the book is too long. They prefer shorter, punchier dramas about sports stars, which is an understandable preference. In that case, we also recommend the less-factual, but hugely entertaining Jim Thorpe: All American

, produced just two years before Thorpe’s death and starring Burt Lancaster. Even six decades later, the Michael Curtiz movie still stirs viewers. (And, for movie buffs: Thorpe did act in more than 60 movies, often in Westerns as an uncredited Indian bit player. However, he did not appear in the Curtiz movie, even as an extra. Contrary to myths about that era, Thorpe was paid for his story and did serve as an advisor to the production.)

For further reading on Native Americans, we recommend the ReadTheSpirit book, “Dancing My Dream,” a memoir by Odawa elder and teacher Warren Petoskey. Warren’s book is an inspirational retelling of life in a multi-generational Indian family, but his book also confronts the painful legacy of Indian boarding schools.