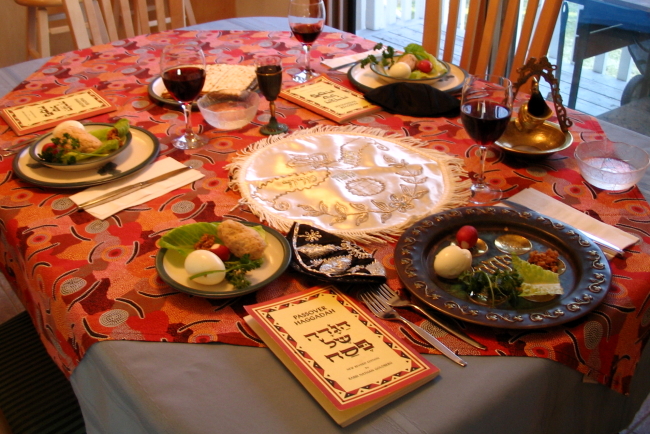 A table set for a Passover seder. Photo courtesy of Wikimedia Commons

SUNSET WEDNESDAY, APRIL 8: Tonight, Jews begin the joyous festival of Passover—the most widely observed of all Jewish traditions. Yet while families traditionally observe the first night of Passover with family and friends over a seder, the COVID-19 pandemic is forcing Jews to celebrate differently this year.

PASSOVER AMID THE 2020 PANDEMIC

Each Passover, Jews around the world ask the same question: “Why is this night different from all other nights?” This year that question will be answered in a unique way, as social distancing and “shelter in place” restrictions are causing seders to be more simple, basic and small. In a positive light, this situation in some ways relates to the first Passover, as was written recently at Chabad.org: “On the very first Passover, in Ancient Egypt, each family was sequestered in its home. No one was permitted to step outside. Outdoors, a plague swept through the land, but in each Jewish home, there was light and hope.”

Are virtual seders permitted during this year, during the world’s pandemic? Well—yes and no. In Orthodox practice, the use of electronic devices is forbidden on yom tov, or religious holidays, yet many rabbis are granting permission for this year’s Passover. In Israel, a group of Sephardic Orthodox rabbis issued a letter that approved videoconferencing programs for this year, but several Orthodox rabbis are opposing this, saying that the answer to this question is still “no.” Branches within Judaism vary opinion on this issue, but to learn more, check out this article in the Jewish Telegraphic Agency or this story in the Jerusalem Post.

Leaders of six major Orthodox organization released a joint statement asking Jews to limit preparations for Passover to only essentials, and to limit rituals such as getting haircuts and purchasing new clothing. Read more in the Jewish News Syndicate.

Some Passover tasks are encouraged this year—such as thorough cleaning—while others, such as shopping for specific menu items in overcrowded stores, are discouraged. Fox News interviewed a rabbi and has the story.

Many Jews will share a seder over Zoom or other video-chat services, and while traditional meal preparations cannot be shared, words still can. Read more in the story from Jewish Telegraphic Agency.

Get tips on hosting a virtual Passover seder, from USA Today and Forbes.

Hosting a solo seder? Get how-to tips from My Jewish Learning.

Public seders are prohibited in Israel this year, but many mega-seder hosts—such as Colel Chabad, the oldest continuously operating charitable organization in Israel—will instead deliver complete seders and Haggadahs to the needy, homebound and to those in forced isolation. Read this story, and more, at Chabad.org.

The London Beth Din has broken hundreds of years of tradition by telling British Jews that they can use some regular products for Passover this year, in efforts to help struggling or homebound Jewish families who are unable to shop for or find “kosher-for-Passover” items. The religious court published a list of products that can be used this year, instead. Read more at JewishNews.com. 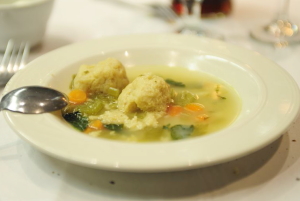 A bowl of matzah ball soup for Passover. Photo courtesy of Vandenberg Air Force Base

Tonight begins the seven- or eight-day festival (Jews in Israel observe seven days; Jews of the Diaspora observe eight), as Passover commemorates the ancient Israelites’ liberation from slavery in Egypt. Among the events in the biblical story recalled during the seder, Jews give thanks to G_d for “passing over” the homes of those whose doors were marked with lamb’s blood during the biblical Plague of the Firstborn, for helping them to escape safely from Egypt’s army and for eventually leading them to freedom.

Why is it so important to get rid of leavened products during this time? According to Exodus, as the Israelites left Egypt they moved so quickly that their bread was not able to rise. To this day, unleavened matzo bread is a staple element on seder tables and a symbol of this ancient festival.

Did you know? Matzo is made from flour and water that is mixed and baked in 18 minutes. As matzo is such an important element of Passover, many Jews are trying to revive the art of homemade matzo. Baking matzo is a challenge; only 18 minutes are allowed between the mixing of flour and water to the finishing of baking. Elaborate measures are taken to ensure the mixture does not rise.

During the day today, Jewish families may observe the Fast of the Firstborn. Tonight, after sunset, Passover will commence. As Passover begins, seders—ritualistic meals with readings, stories, songs and spirited discussion—are held in Jewish households everywhere.