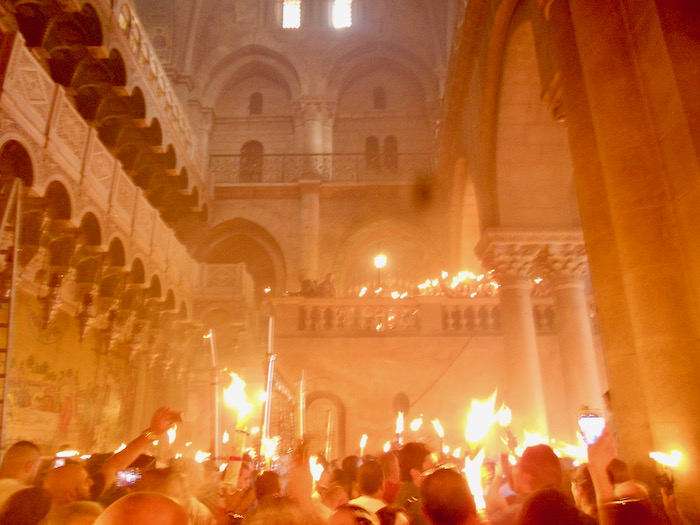 Spreading the Holy Fire in the Church of the Holy Sepulchre in Jerusalem. (This image was shared globally via Wikimedia Commons.)

EDITOR’S NOTE: Here at ReadTheSpirit magazine, our goal week after week is to cover global religious and cultural diversity—including diversity within Christianity. Nearly 300 million Christians follow Eastern Orthodox traditions with their own liturgical calendars and customs. That includes the dazzling ritual of the “Holy Fire” emerging from the Church of the Holy Sepulchre in Jerusalem, a flame that kindles countless other lamps that are carried far and wide as a symbol of Easter hope. Because ancient calendars vary, many Eastern Orthodox churches around the world did not mark Easter until May 2, which meant that the ritual of the Holy Fire occurred on May 1. Sharing this story with is us Kevin Vollrath. You can find his earlier story on Orthodox Great Lent right here.

Waiting for the Holy Flame with Abuna Awad in Aboud 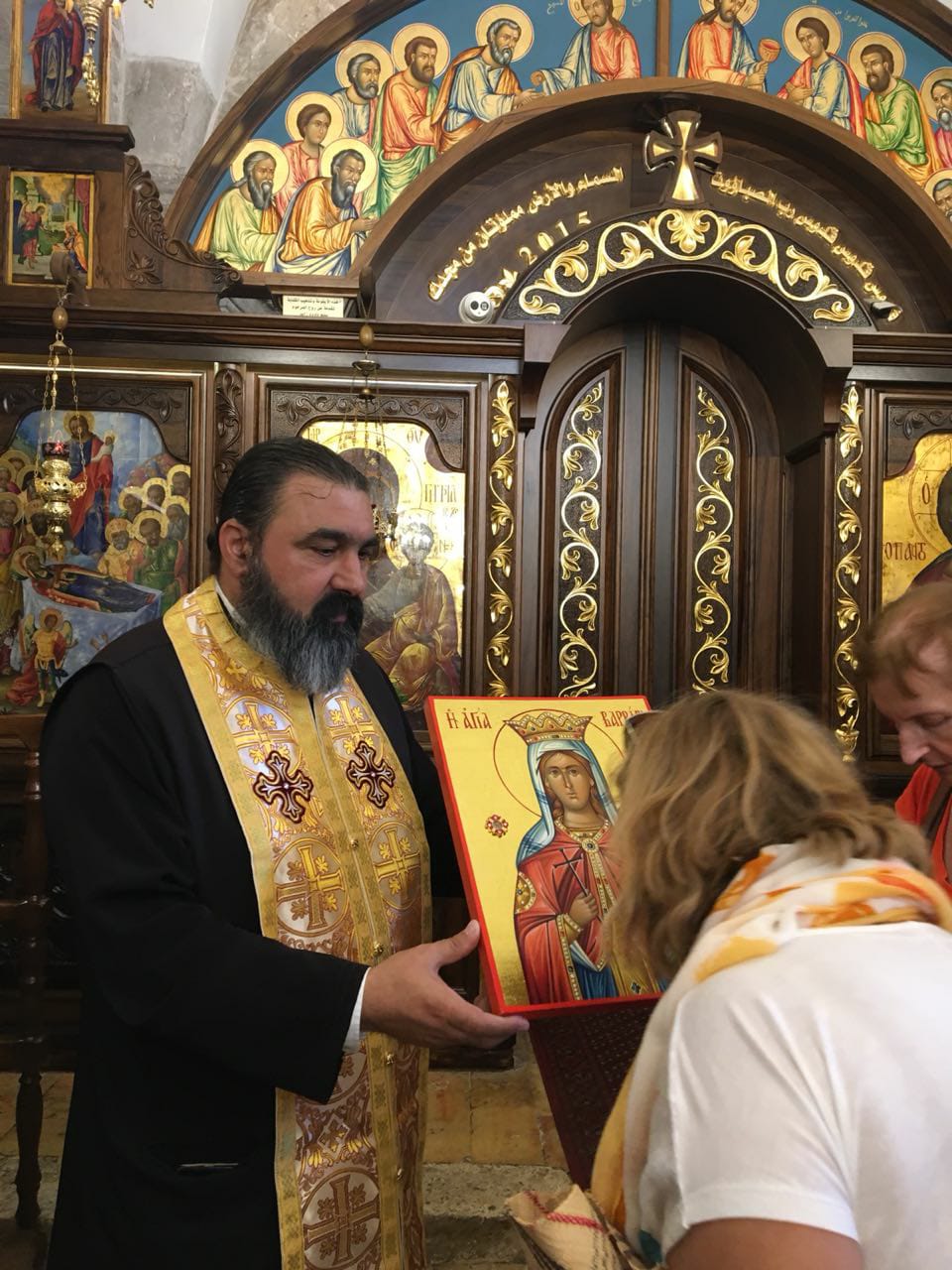 Many pilgrims travel to the Holy Land during Lent to observe the Orthodox Easter liturgy in the Church of the Holy Sepulchre. Easter 2020 was a sad occasion, due to the pandemic. No pilgrims were allowed to attend this beautiful service, which was conducted by a handful of religious leaders. This year, according to both Reuters and Associated Press, hundreds of pilgrims who could show that they had been fully vaccinated were allowed to crowd into the ancient church, once again, starting with the Saturday service of the Holy Fire.

During this service, Christians crowd around the little stone enclosure in the center of the vast church, marking the spot tradition says Jesus was buried. The service begins in deep shadow, then lights emerge from the little stone enclosure—and then quickly spread across other candles and lamps until the entire interior of the church glows with their collective blaze.

Some call this the Miracle of the Holy Fire. Even Orthodox leaders have debated over the years whether this annual emergence of light can be called a true “miracle,” but the custom has been reported since the first centuries of Christianity and the inspiration of the event feels miraculous to pilgrims. The spiritual effect of the spreading flames is one of the most stirring visual manifestations of the faith—especially as those lights spread outside the church’s doors, across the Old City of Jerusalem and eventually around the world. Special flights are arranged each year to carry the flame from Jerusalem to Greece and other main centers of Orthodoxy.

The eager anticipation of these flames is just as intense in Palestinian Christian churches spread across Israel and Palestine.

Meet Father (or in Arabic, Abuna) Emmanuel Awad, an Orthodox priest in a village called Aboud, about 11 miles northwest of Ramallah and 18 miles north of Jerusalem. The name “Aboud” comes from the word origin meaning “to worship.” People from the small village tell the story of how it ws named after the biblical prophet Obadiah.

Abuna Emmanuel grew up in Innareek, another village outside of Ramallah in the West Bank. After studying to be an electrical engineer, he returned to the Orthodox Church in 1999 and quickly became a deacon. He married, was ordained and has two sons and a daughter. He has been serving as the local priest of The Dormition of the Theotokos Church since 2010. The church is one of the oldest in the Holy Land having been commissioned by Helena, the mother of Constantine in 332CE.

Abuna Emmanuel says that the essence of being a Christian is loving everyone and opposing hate always. Even though he’s ordained in the Orthodox church, and even has a PhD in Orthodox Studies, he professes not caring about denominational divisions: “We’re all just Christian, witnessing for Jesus Christ.”

For Abuna Emmanuel, Orthodox Easter liturgy captures the heart of the Christian gospel, enabling us to better love ourselves, fellow believers, the world and God.

One cannot understand the Easter liturgy, though, apart from its Lenten context. Easter liturgy is the culmination of three parts: first, preparation before Lent, including a gradual start to fasting (you can read more here). The second part is Great Lent, which runs for 40 days from Clean Monday to the sixth subsequent Friday, the day before Lazarus Saturday and Palm Sunday. Holy Week, beginning with Palm Sunday, is the third part.

One way to determine the time during Holy Weekend in an Orthodox church is to look for the Epitaphios, an icon often made of cloth that depicts Jesus’ preparations for burial. During the Gospel reading of evening prayers on Good Friday, the priest and deacon move the Epitaphios to the Holy Table. At the end of the service, the Epitaphios is brought to the center of the church, where it remains available to be visited by the faithful until Holy Saturday Matins, often observed late in the evening of Good Friday. Priests and deacons then hold a somber procession with the Epitaphios outside the church, with bell tolling and funeral singing.

Over the long services concluding Holy Week, Abuna Emmanuel says “we feel Jesus Christ’s suffering and his tiredness and his cross. We also feel Jesus’ pleasure that comes from resurrection, commemorated by the light that emerges from Jesus’ resting place.”

When Abuna Emmanuel’s church received its flame from Jerusalem on the evening of Holy Saturday, the faithful processed around the church building, remembering their baptism just as they did at the beginning of Lent, moving from death and darkness to light and life, singing: “The angels in heaven, O Christ our Savior, sing of Thy resurrection. Make us on earth also worthy to hymn Thee with a pure heart.”

In Abuna, the service often lasts about 3 hours, until 1 a.m. These liturgies can be even longer in other parts of the Orthodox world.

Unlike many Western churches, fasting ends Saturday evening with light foods: cheese, ham, mini-sandwiches, chocolates, hand-prepared wine. Maamoul cookies are one traditional favorite,  sometimes stuffed with date paste and other times arranged in the shape of a crown.

Traditionally, Sunday morning services are much shorter and most of the faithful already have gathered the night before, so the Sunday congregation usually is small. The prayers last about a half hour and focus on gratitude to God for Jesus’ resurrection and the grace it brings. After service, Palestinian believers generally celebrate at their homes with their families, often dining on lamb if it is available. Orthodox Christians believe Jesus’ sacrificial death fulfilled Passover requirements for a lamb sacrifice.

Instead of the usual daily mass, the week following Easter has no masses until the following Sunday, celebrating the eight days as though they are one day (known as Bright Week). The lack of fasting also indicates the joy of resurrection. The following Sunday, known as Thomas Sunday, commemorates Jesus’s arrival at the disciples’ house.

Here is a prayer Abuna Emmanuel shared with his people as they moved from Easter into Bright Week:

Beautiful God, we thank you for the many creative liturgies with which you have blessed the Church. We ask that our celebration, in whatever tradition we find ourselves, would bless you. Bless this church and the whole Orthodox church. Dwell with us as we feast this Easter season! In Jesus’ name, Amen.

Abuna Emmanuel works with Churches for Middle East Peace (CMEP) and, in this video, he talks about his church and what it’s like to be a Christian in Palestine.