Photo in public domainTUESDAY, MAY 1: Welcoming summer isn’t just for the ancients anymore! In what has been revived as one of the most popular events of the season, tens of thousands of celebrants in Ireland, Scotland, the Isle of Man and elsewhere will welcome warm weather on Beltane/Beltaine. What began as an ancient Gaelic festival, observed widely by pagans, is once again picking up speed and being observed by modern Pagans—and non-Pagans—in several countries.

The Gaelic name for the month of May can be traced to the modern spelling of “Beltaine.” That’s natural as this festival occurs on the first of May and is also known as “May Day.” (Wikipedia has details; or check out the BBC.) Halfway between the spring equinox and summer solstice, the ancient Beltaine was a time of fertility rituals, when enormous bonfires were constructed to purify both people and livestock. Traditionally, people would walk in a sunwise direction around the bonfires, and animals would be driven between two flaming pits. (To this day, in Gaelic lands, you might still hear the phrase “between two fires of Beltane” used to describe being caught in a difficult situation.) During the day, women would and will decorate their homes and hair with flowers and branches. (Learn more at Wicca.com.) 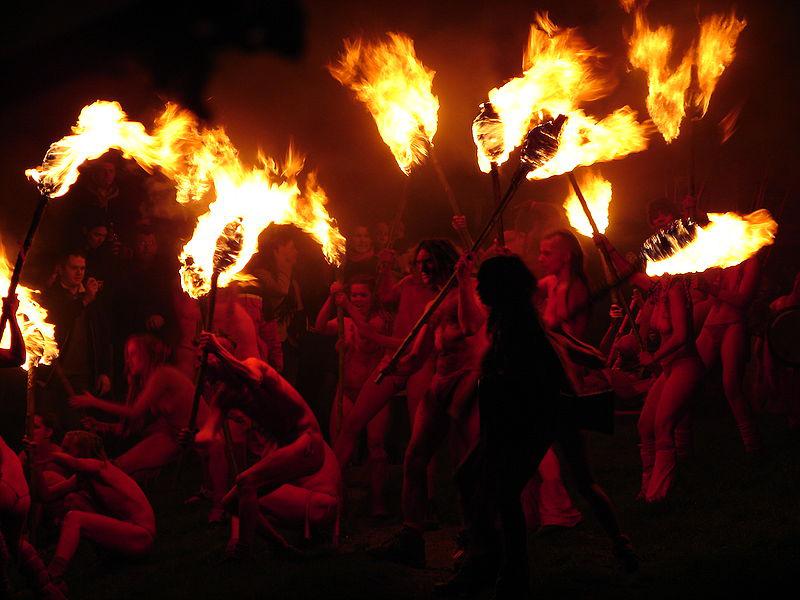 Here’s what the Edinburgh Beltane Fire Festival looks like in all its glory. Modern Pagans and Wiccans around the world love fire festivals. One of the biggest in the U.S. occurs at the annual Burning Man Festival at the close of each summer season.Modern Pagans and Wiccans observe Beltane as one of eight solar Sabbats, although more non-Pagans are now taking part in the customs of this day. This year, the Beltane Fire Festival of Edinburgh will see its 25th anniversary; the Fire Festival begins at 8 p.m. April 30 and runs through the wee hours of the morning May 1. (Read more at Scotsman.com.) This year, a record crowd of 12,000 is expected; 300 performers are scheduled in the lineup; and spectaculars will include a towering man made of wicker, into which spectators will hide their wishes for the coming year and then burn. The Telegraph reports that as modern music festivals have seen waning numbers, more traditional events—such as the Fire Festival—are seeing more attendees than ever.