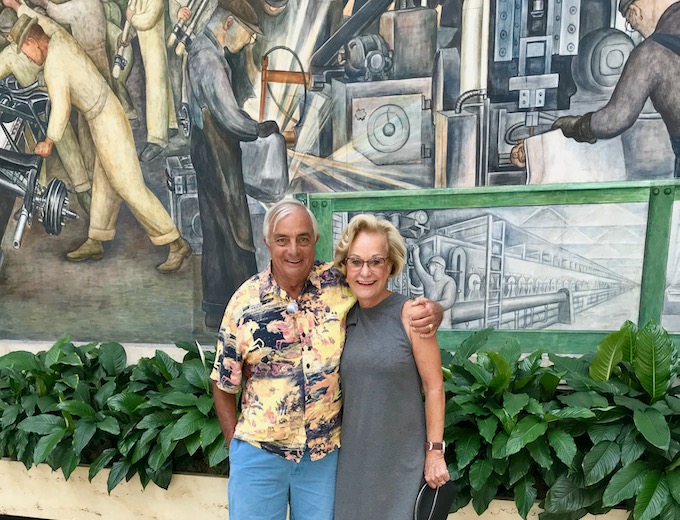 My friend Gretchen Ruff has welcomed a beau into her life as gracefully as she’s incorporated his many collectibles.  Gretchen’s home on Hammond Lake, bought in ’93 with her late husband Frank, is filled with Dale’s art deco statuary, old toys, maps, lighting, coin and stamp albums, photos, 2000 books, American and Chinese antiques and even a monstrance (communion host receptacle).  Dale was raised Catholic.

Getting to this point hasn’t been easy…

The couple  met during a snowstorm in January ’16. From then on, if they weren’t together, Dale called Gretchen nightly at 9:30.  They discovered many commonalities.  Both considered T.S. Eliot their favorite poet.  Both enjoyed the symphony and other arts.  Both were caught up in the ’67 Detroit riots.  Both had been affected by alcoholism.  Both loved travel.   A year and a half later, Dale and his umpteen collectibles moved in to Gretchen’s striking house in W. Bloomfield, MI, on Hammond Lake.

Dale was a lawyer, known for successfully litigating asbestos cases.  Of Irish background, he inherited a fondness for drink.  Alcoholism ended his career.  It almost ended his life.  Recently divorced, he’d been on and off the wagon for years.  A car accident in 2011—so bad he doesn’t remember it—rendered him unconscious, comatose over a month.  He fractured 45 bones, broke his neck in 3 places and suffered brain damage requiring 2 years of retraining in Ann Arbor.  He resigned from the law firm in which he was a partner and lost his driver’s license for a year.

As part of Dale’s probation, he needed to reside in the county where he’d been ticketed.  He lived in a trailer in Wixom, MI, and relied on AA friends to drive him to and from countless medical appointments and AA meetings.  For 4 months, he lived in a locked-down treatment facility.  An insurance company refused to pay on a policy because of the alcohol level he registered at the accident.  He wasn’t able to travel to Canada where he was from.

Recovery took more than 2 years.  After many months of “rigorous” PT, OT and speech training, Dale has recovered most of his brain and body function.  Residual effects from his injuries continue to decline.  This past September marked his 8th anniversary of sobriety.  In October he completed the 5 year probation required to be able to cross the Canadian border.  Because his parents were from Nova Scotia, he was born with dual citizenship.  He looks forward to returning to Nova Scotia soon.  His “plenty pissed off” family is back in his life.

Despite recovering what he deems 85% of his faculties, Dale recognizes the price he paid.  As he says, “It was an extremely difficult chapter.”

Gretchen says, “Dale made a choice to live.  He fought to get his skills back.  He finally made a series of good judgments.”  After 4 years of recovery, Dale met Gretchen.  Having been married twice before, for a total of 49 years, Gretchen views Dale as her 3rd husband, though the couple has no plans to marry.  Dale says, “I’ve felt married since the day I moved in.”

While Dale was recovering, Gretchen, who hadn’t yet met him, suffered challenges of her own.  Gretchen’s corporate career spanned 43 years.  She started with the legendary JL Hudson Co. (where we first got to be pals).  She became Director of Events and Publicity for then 27 Hudson’s stores.  She next held senior VP positions at 3 ad agencies for the Big Three  (GM, Ford & Chrysler to non-Detroiters) until she retired in ’07.  In post-retirement, she was a personal shopper and brand ambassador for Brunello Cucinelli, one of the top 2 luxury brands carried by Saks Fifth Ave.

Gretchen’s first marriage to Greg Snow lasted 28 years.  His abuse of alcohol contributed to their eventual divorce.  She started attending Alanon meetings 10 years before the divorce, “mostly as a support system but also to address and take responsibility for my co-dependency.”  She‘s been meeting with an Alanon based support group for 35 years.  She and Dale “revere” the 12 Step program.

Gretchen had been married to 2nd husband Frank Ruff for 21 years when he died after a 7- year battle with Nuclear Parkinson’s and dementia.  Gretchen was Frank’s primary care giver.

A few months after Frank died, Gretchen joined some friends for a ski week in Keystone, CO.  Though a good skier, she slipped on a patch of black ice, ran into an Aspen tree and shattered her pelvis, resulting in 44 fractures.  She ended up at a rehab facility in Denver where it was decided she should (and did) heal without surgery.

“Away from family or friends, incapacitated and in hellish pain,” Gretchen says, “I had my own come to Jesus moment.  I recognized how alone I was.  I decided I had not only the de)sire but the courage to do something about it.”

She resolved to try online dating.  Several male friends advised her to deduct 10 years from her age, admitting to 63, not 73, “or all I’d get was calls from men in their 80s.”  (Personal testimony: Gretchen’s always looked, thought and acted young.)  Her photo in front of the Rivera mural caught Dale’s eye.  He was looking for a gal with taste and intelligence.  If Gretchen was a museum goer, she might be that gal.  He called.   They went for coffee and talked for hours.

18 months later, Dale moved into Gretchen’s home—she now calls it “our” home.  They still talk for hours, in mornings over coffee.  They’ll have been together for 4 years in January, 2020. 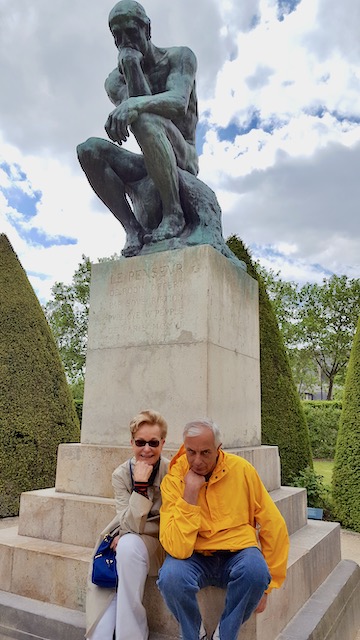 Buying tickets for a trip to Paris in 2016, Dale asked Gretchen for her passport.  “That’s going to require another cup of coffee,” she said, preparing to hand over the evidence of her chronological fabrication. Gretchen’s 6 years older than Dale.

They happened upon a private concert at Sainte Chapelle, commissioned by Louis IX.  Violinist Paul Rouger was playing Vivaldi’s “Four Seasons.”  Gretchen says, “There was something about being there together, with the sun setting outside the stained glass, that struck both of us as meaning things between us would work out, that we were in a thin space.”

(A thin space is a place or experience in which heaven and earth seem more closely connected and God’s presence is keenly felt.   NYT columnist Eric Weiner writes, “The ancient pagan Celts, and later, Christians, used the term to describe mesmerizing places like the windswept isle of Iona /now part of Scotland/ or the rocky peaks of Croagh Patrick.  Heaven and earth, the Celtic saying goes, are only three feet apart, but in thin places that distance is even shorter.”)

Before her mother died in 2012, Gretchen had asked how she’d know her mom was looking out for her after she’d passed away.  Her mother told her feathers were a sign of new growth. Look for feathers, she’d said.   While in Paris, Gretchen sought a strategically placed feather to signal her mom’s approval of her new relationship with Dale.  She never found one. 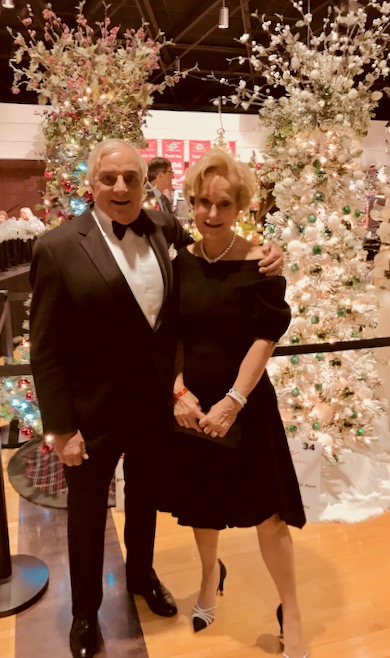 But on their return: a Godsign.  Gretchen says, “When we got home, right in front of the door to our house, I found this.”  She picked up a cup containing several feathers and pulled out a delicate cream colored feather.

Gretchen wanted to give Dale a piece of jewelry to commemorate his 5th anniversary of sobriety.  Dale agreed to Claddaghs, matching Irish rings, if he could design them.  He collaborated with Gretchen’s nephew by marriage, Jacob Snow, who makes fine jewelry in the Celtic tradition.  They chose symbols from the Book of Kells.  Gretchen and Dale’s beautiful gold bands incorporate a Celtic cross, angel wings and a Chi Rho, the Greek symbol for Christ.  Chi, the first letter in the Greek word for Christ, is depicted as an X.  Hence, the abbreviation Xmas.  (Love the things I learn through this column.)

An active member of AA, Dale does not drink.  Gretchen drinks socially.  Both swim and sail every day Mother Nature permits.  Gretchen prefers to paddleboard.  Dale circles the lake twice by kayak.

Both are grateful to have been given another chance at life and love.  Thanks, Gretchen and Dale, for sharing your stories of hope and healing.  May you continue to feather your nest.

11 thoughts on “A very Detroit story of rebirth, recovery and romance”