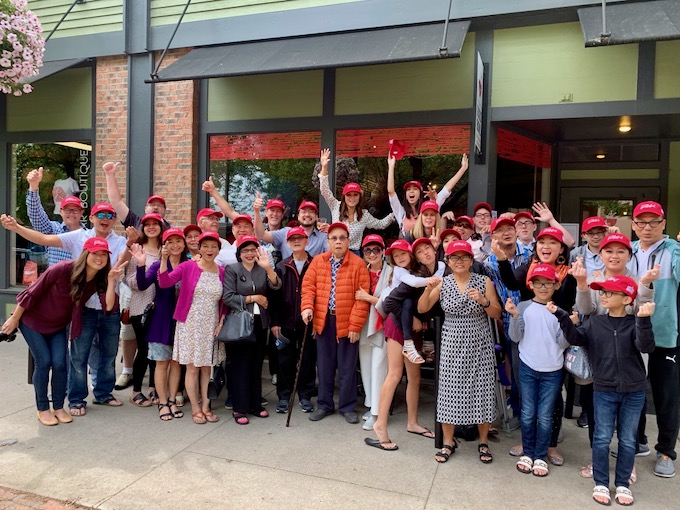 Celebration of Soon’s and Tony’s families.

Soon Hagerty has risen to one of my top ten favorite interviews.  It’s not just due to her remarkable story.  It’s also about her divine dumplings. 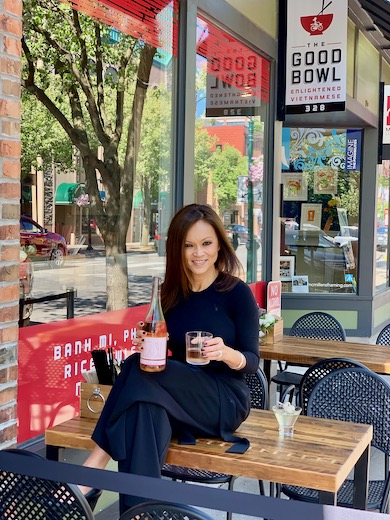 Soon was born in Saigon in 1975.  Her father fought for the South Vietnamese on the American side during the Vietnam War.  After the war ended, in the mid-70s, Vietnamese citizens who’d fought for the South were “requested to enter re-education camps,” Soon says.  In 1979, the family fled “to pursue a better life.”  Soon was almost 5.  Her dad had $300 in his pocket when the family landed in the U.S..  Soon’s mom left 11 siblings behind.  Her dad, 14.

Soon’s family, including 6 kids and her pregnant mother, spent 40 days on a boat before landing in the Philippines where they stayed for 6 months at a refugee camp.  The family landed in Fresno, CA, sponsored by an uncle who’d also fought for the South.  About 800,000 Vietnamese left their country by boat from 1975-95.  Many perished due to danger from pirates, overcrowded boats and storms.  Soon’s family of 8 were among the lucky ones.  All survived.

Soon says, “Being a refugee taught me a lot about resilience and not looking back.  About the importance of people.  Not things.”

(Personal note.  I grew up with only a vague notion of Vietnam.  In March, ’65, while a junior at the U of M, I heard about an upcoming event called a “teach-in,” the first of many to follow on other campuses.  Professors spent the night lecturing on a war in an obscure place in southeast Asia.  Due not to political savvy but to my innate desire to be part of the action, I decided to attend.  I tried convincing some SDT sorority sisters to join me.  No luck, so I went solo.  I returned better informed about Vietnam but still personally unaffected. 3 years later, my new husband was reclassified 1A.  Now I was affected.  Phlebitis spared Burton from the draft.  My ex-boyfriend in ROTC served in Vietnam and returned emotionally scarred for life.  More than 58,000 American youth came back in caskets.)

Soon’s parents scrambled to support their kids.  They bought a couple of acres at a time, growing fruits and vegetables native to their culture to feed their family and peddle, door to door, to grocery stores.  That business grew  into the Asiana Produce Co., a small firm now run by Soon’s sister.  In elementary school and junior high, Soon says, “I remember hating summers because I had to work on a farm picking and packing vegetables.”

In time, the family adjusted to their new country.  “For everything we had to figure out, including learning to speak English, my siblings and I turned out pretty normal.”  The rest of her family still live in California, mainly in the Bay area, with careers as entrepreneurs or in real estate.

Soon grew up, attended college at Fresno State, and moved to LA seeking a career in PR or broadcast TV.  She landed both.  She joined a firm doing PR for high end automotive and luxury products while moonlighting nights and weekends as a field producer/assignment editor.  At 30, her parents’ entrepreneurial spirit kicked in and Soon launched her own PR agency, Luxe Communications.  One of her mentors and a client of her previous agency , a successful businessman, McKeel Hagerty, from Traverse City, MI, insured classic cars and ran classic car events.  McKeel and Soon fell in love and married 9 years ago.  Together they have one daughter, Ava, 7.

Soon’s been back to Vietnam several times.  She finds the country and its people “awesome.”  Soon’s mom still resents what they endured and hasn’t returned. 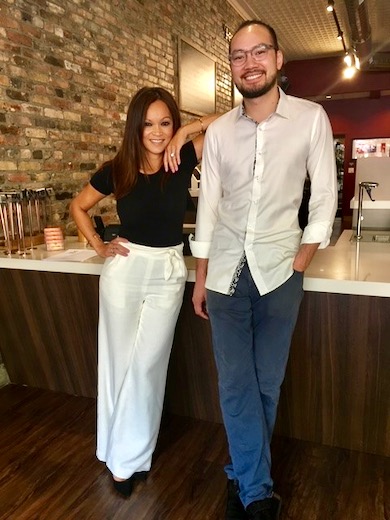 As a teen, Soon longed to be Caucasian like her friends.  But, she says, “As I’ve gotten older, I realize diversity is cool.”  To express pride in her heritage, Soon decided to open a Vietnamese restaurant.  She realized Traverse City lacked both diversity and good places for carry out meals.  Through networking, Soon learned about and met Tony Vu.  His family were also boat people who immigrated to the U.S. in the late 70s.  Tony was running his own small Vietnamese shop, MaMang, in Flint, MI.

Soon and Tony became partners, starting a restaurant they call The Good Bowl.  To cater to locals, they established it toward the north (less touristy) end of TC’s Front St.  Tony takes care of the kitchen and “creative side.”  Soon handles overall business operations, marketing and the front of the house.  She calls herself “a strategist and people person.”  She sees her job as “supporting the team.  And wiping down tables as needed.”

Soon says, “Many people helped my family along the way.”  The Good Bowl reflects her desire to give back.  Soon and Tony carved out an unusual niche.  $1 of every meal goes to a local, national or international charity.  Guests suggest the recipients; staff vote for their choices.  In its first year of business, The Good Bowl donated over $30,000 to charities including Father Fred, St. Jude Children’s Research Hospital and Doctors Without Borders.  Signage describes the current charity recipients, enhancing customer awareness.

Soon also organized Help in Heels, a group of 12 Traverse City women whose mission is to learn about, assist and donate to different local charities.  They take turns choosing the recipient.  One member decides which charity the group will focus on that month.  In the last 5 years, they’ve helped build homes for Habitat for Humanity, collected school supplies for teachers who’d other wise have spent their own money for classroom needs, made dinner for abused women at the Women’s Resource Center.  Recently they painted 500 stones with inspiring words for Michael’s Place, a counseling center for grieving youth.

Soon’s family, the Nguyens, are so grateful to be in America that every 5 years they mount a celebration honoring their adopted country.  Gatherings are filled with “lots of tears and toasts.”  For the 30th anniversary of the Nguyens’ arrival in America, Soon produced an Apple book featuring photos of the family’s journey.  On the cover: an image of her parents’ wedding day.  She printed 30 copies, one for each family member.

In 2018, Soon arranged a family reunion.  Tony joined in.  Between Soon’s 25 family members and Tony’s 11, the twosome hosted brunch for 37 at The Good Bowl.  The families got along so well that Soon invited the Vus to her house for a lobster fest.

I left the restaurant having devoured all the dumplings Soon put before me.  She sent me home with a delicious concoction called Pho but pronounced fah.  And with dumplings instantly scarfed up by my family.  My tastebuds have never enjoyed an interview more.

Thanks, Soon, for sharing a fascinating and delectable story.  And for reminding us of the blessing of being a nation of immigrants.  I shall return.  Soon!

(Thanks Nadine Farbman and Natalie Victor for introducing me to Soon.) 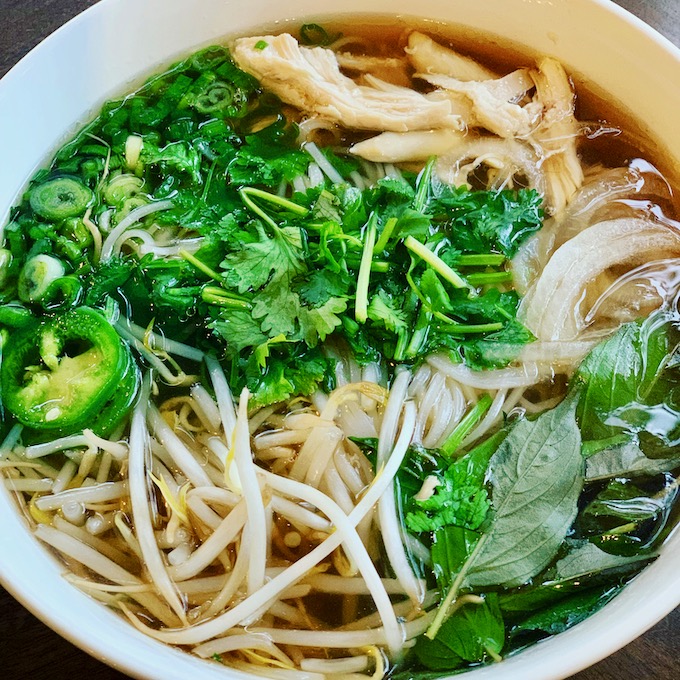 A delicious bowl of Pho. Perfect for a chilly winter’s day!

One thought on “From Vietnam to Traverse City, an all-American story of embracing diversity, including delicious Pho”